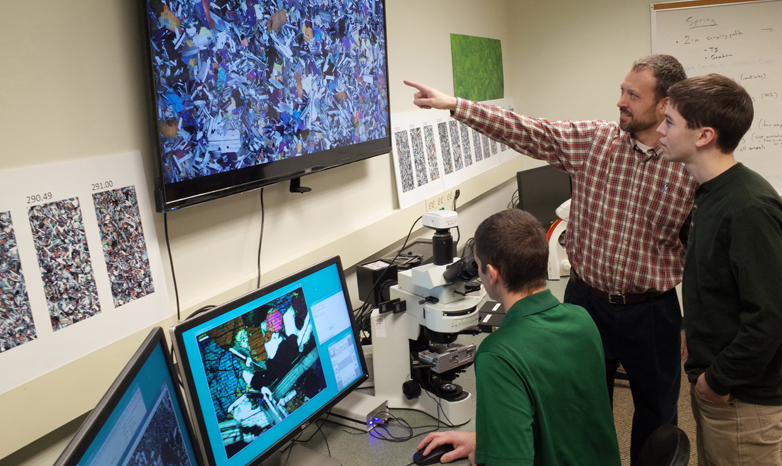 SLIPPERY ROCK, Pa. - Just as volcanoes have alternating periods of eruption and dormancy, molten rock is periodically being added into vast subterranean magma chambers beneath these volcanoes. As it enters these underground chambers, the magma freezes into layers much like the lava flows making up a large volcano.

Michael Zieg, professor of geography, geology and the environment, has been awarded a $163,424 grant from the National Science Foundation to continue his research into the physical evolution of magma chambers, and as a way to support undergraduate involvement in the scientific process.

Blake Wallrich, a geology major from Pittsburgh, and Sam Hone, a geology major from Portersville, are currently partnering with Zieg. They will help in all aspects of Zieg's research, including preparing rock samples, measuring crystal sizes under microscopes in SRU's imaging lab and analyzing mineral compositions using an electron microprobe in West Virginia. An electron microprobe is used to determine the chemical composition of small sections of rock. The tool uses an electron beam and X-rays to determine concentrations.

"In my mind, this type of experience can be an extremely valuable part of a student's education," Zieg said. "It will help them develop skills such as critical thinking, problem solving and creativity, that will benefit their future careers, whether they choose academic or private sector paths."

"In addition to working alongside me collecting and analyzing data for the main project, they will be allowed, indeed expected, to develop their own hypotheses using the data they collect, test their hypotheses and then present their results each May at the annual Institute on Lake Superior Geology conference," he said.

Zieg said he has been developing this project since he arrived at SRU in 2003, and that it builds on prior research he conducted in Antarctica and in Sudbury, Ontario. Many former SRU students have worked with him on the project, helping to develop and test the ideas that form the basis of this new grant. He said he is excited about the opportunity this will provide for additional students to get involved.

Wallrich said he got involved in the research in 2014 and that is has been one of the most rewarding projects of his undergraduate experience.

"Conducting hypothesis-driven research in the Slippery Rock University geology department allows student researchers to expand upon the fundamental principles established during class and their critical thinking skills by means of technical application through hands-on experience," he said.

Wallrich said one of his favorite geologist sayings is, "get in the van," meaning "pursue fieldwork."

"Although we are not necessarily in the field, we are conducting supervised research with a professor who is well respected and knowledgeable within this area of study," Wallrich said. "As a student, I could not ask for anything more than this, it will and already has changed the way I am approaching my future as a student of geology."

Hone said he is involved with studying the composition and characteristics of core samples at various depths in the magma chamber.

"This is a very exciting opportunity for me because I get to be part of a long term project supervised by a professional in my chosen field. I will learn to use specialized equipment and analysis methods, and gain practical experience in the field of geology that will be invaluable in the future. I also enjoy the work," he said.