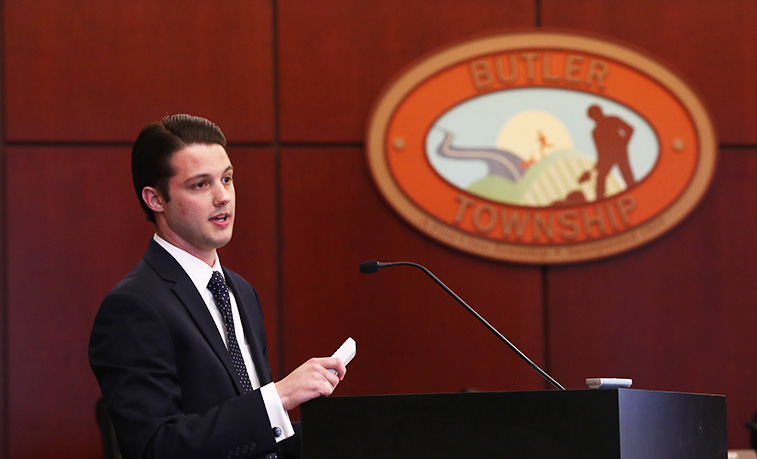 SLIPPERY ROCK, Pa. — Typically, Slippery Rock University students in the Public Relations and Integrated Marketing Communication Capstone course pitch marketing campaigns to local clients to help them drive sales. This year, however, two SRU groups developed campaigns to improve public services, and for one student, that meant pitching ideas to the same people who seven months earlier were risking their lives to save his family's home.

Cory Milkovich, a senior communication major from Butler, presented his group's campaign proposal to commissioners from Butler Township to help the township's fire department recruit volunteer firefighters. During one of the presentations, Milkovich spoke directly to members of the same department who in September 2018 battled a blaze that destroyed his family's home in Center Township.

"When you're actually affected by the issue, it means so much more," Milkovich said. "These people are real heroes because when you're running away from a fire, they are running toward it. This is something I can relate to. I may not be a firefighter, but I am someone who was helped by firefighters."

"This was a great opportunity for students to work with real-world clients and develop a campaign that has the potential to be implemented and effect meaningful change in the community," said Allison Peiritsch, SRU assistant professor of communication, who teaches the class that has 52 seniors working with 11 clients. The class functions as a marketing agency to provide pro bono work that clients, if they choose to do so, can decide to implement following the semester.

Earlier this semester, Tom Knight, Butler Township manager, and Butler Township Commissioners Dave Zarnick and Fred Vero attended an IMC capstone class to present students with the township's needs. Two teams of students, consisting of a project coordinator, researcher/analyst, designer, writer and presenter, were selected by Peiritsch to develop a campaign that they later pitched to the commissioners.

"(The commissioners) were so excited about the proposals they viewed on campus that they invited the students to present at their own meeting the next week," said Peiritsch. "They brought in some of the current firefighters to present the proposal to them in an effort to get their buy-in because (the firefighters) would be the ones executing the campaign that the students were recommending."

"It's a good learning experience for us, but it's also good knowing that the work we are doing will not go unnoticed and we have a chance to spark change and transfer what we learned in the classroom to real-world clients," said Tom Streit, a senior communication major from Cranberry Township, who is the project manager for the team recruiting firefighters. "They are taking our criticism and we're taking theirs and we are working together."

"Public service is very hard to get, and it's not just in Butler," Milkovich said. "But this is something that's worth the effort."

The students collected responses from a focus group of six firefighters and surveys taken by more than 180 visitors to the Butler Township website and Facebook pages, 63 percent of which never considered joining the fire department. Many respondents don't believe they have the physical capabilities needed to be a firefighter.

The students came up with a campaign titled "Find Your Calling," which included news releases, brochures and a fact sheet that would be distributed to the public through the media and other channels. They also proposed events like "A Day in Our Boots," where the public can participate in light training exercises to get a better understanding of the job. There are also plans to target high-school-age students to become firefighters.

A second group of five SRU students pitched a campaign to the commissioners to address the township's eight-year contract with Waste Management as its garbage and recycling collector, a change that went into effect Jan. 1. The changes left many residents with complaints, concerns and unanswered questions despite a leaflet that was distributed by mail explaining the switch.

"We were brought in to manage expectations of the new company and promote the positives of the change," said Abby Long, a senior communication major from West Newton, who is the project manager for the garbage and recycling awareness group. "A lot of people were resistant to the change and they were unhappy that they couldn't recycle glass and about the size of the new bins and even their color."

Many companies no longer accept glass as a recyclable product because there is no longer a demand for it by foreign countries. Long and her team accentuated many of the benefits of the new contractor, including free e-waste removal, through a campaign they titled "You are Paying for It - Use it!"

"I've never worked with local government before, so this is an eye-opening experience to learn how local government works and working with the public," said Long, whose previous internships included marketing for The Children's Home of Pittsburgh and Lemieux Family Center. "This is like having a third internship for me. We're doing the work for a client and you can see the results if they choose to use it. Our whole group is practicing design, writing skills and communicating with government officials. Overall, it's a great field experience."