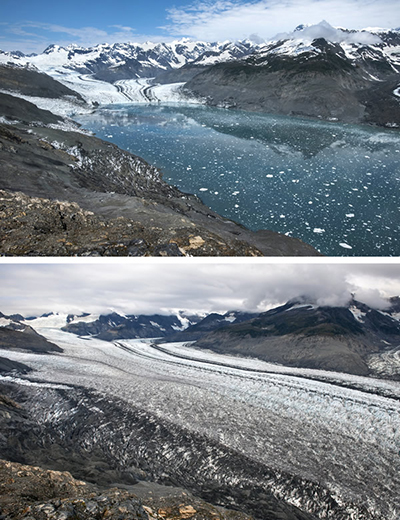 Time lapse photos show the retreat of the Columbia Glacier in Alaska
between 2009 and 2015. Photo: James Balog and the Extreme Ice Survey.

SLIPPERY ROCK, Pa. - At the end of the day, it isn't about being contacted by the Associated Press or the Washington Post for Patrick Burkhart. It's about getting the world's population to recognize the impacts that the combustion of fossil fuels is having on the environment, reducing carbon consumption and finding energy sources for the future that are more ecologically friendly.

But in order for that to happen, if it means the Slippery Rock University professor of geography, geology and the environment has to entertain inquiries from major news outlets about his recently co-authored paper, "Savor the Cryosphere," so be it. "As far as I'm concerned, the best thing that could come of all this is that, as the title suggests, people simply begin to care, or care even more than they do about the retreating of the planet's glacial ice surfaces."

The group initially came together in December 2014 as Burkhart looked to put together a panel of experts to spearhead a GSA webinar. The success of the group's webinar interaction fostered the idea of writing the paper, which was first presented at the GSA Pardee Keynote Symposia during fall 2015.

The group then conducted additional research and submitted the paper to the GSA last December for peer review and publication consideration.

"I believe the timing for this paper is fortuitous because there is so much skepticism of the sciences at the moment," said Burkhart. "To be able to put hard evidence and photographs in front of people is highly valuable and helps to contribute to the debate about what we as humans should do to protect the planet.

"The motive behind the project was to provide a candid snapshot of what is occurring at the moment, around the world, to glacial ice. One of the nice things that we were able to do is provide a document that contains not only a premier scientific perspective, but also has references for use by educators. Additionally, we have provided a resource for those who feels strongly on the topic to be able to argue their point persuasively."

The group's complete work is available at: http://www.geosociety.org/gsatoday/science/G293A/GSATG293A.pdf