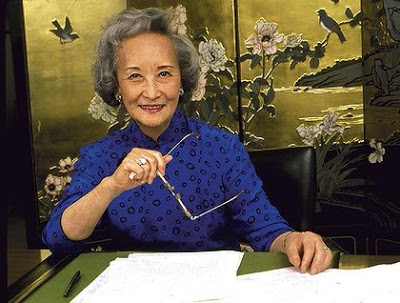 SLIPPERY ROCK, Pa. - Eight Slippery Rock University students have been awarded a total of $21,000 as part of the annual Meiping Cheng Memorial Scholarship presentations for the 2016-17 academic year.

The endowed scholarship was created by the late Madame Nien Cheng in honor of her daughter Meiping Cheng who was killed at age 24 by Maoist revolutionaries for refusing to testify against her during Chairman Mao's rule of China. Meiping Cheng, the daughter of Kang-chi and Nien Cheng, was a promising actress.

Nien Cheng was the author of the 1987 international best seller "Life and Death in Shanghai," which recounts her daughter's life. Nien Cheng died in 2008 at age 94 in Washington, D.C., and bequeathed $600,000 to the SRU Foundation Inc. in her will.

The scholarship was created as a memorial so Meiping Cheng's name would live in perpetuity as a reminder to everyone that freedom, justice and truth require constant vigilance. Her mother had called the scholarship a fitting tribute to Meiping Cheng, "a young lady who felt great compassion and concern for the plight of the disadvantaged."

The scholarship is open to U.S. citizens enrolled at SRU in any major, as well as undeclared students working on an undergraduate degree. Applicants must have a minimum cumulative GPA of 3.5 based on at least 36 credits earned at SRU at the time of application.

A maximum 250-word essay on the topic "What Contributions Would I Like to Make for the Betterment of People and Society Because of My Experiences and Educational Preparation?" is also required along with three letters of recommendation that address the applicants "capacity to analyze and synthesize information to reach sound and plausible conclusions based on factual data." Applicants must also submit a brief letter addressing their financial need, a resume and original transcripts.