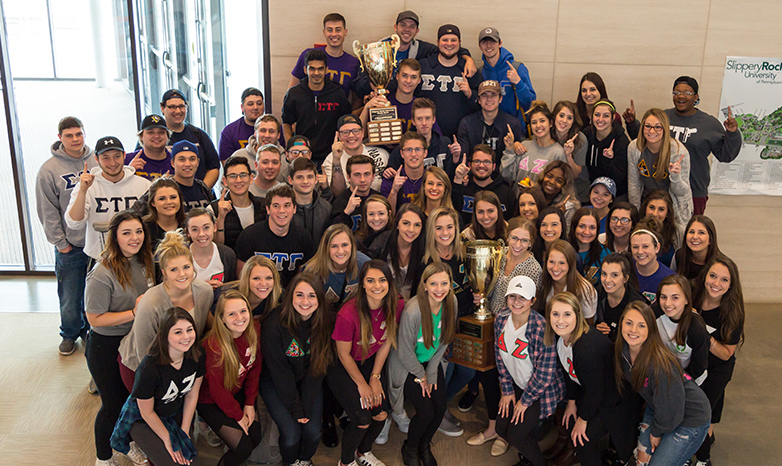 SLIPPERY ROCK, Pa. - The Delta Zeta sorority and Sigma Tau Gamma fraternity at Slippery Rock University were crowned champions of SRU's annual Greek Week activities, April 23-29. Throughout the week, Greek organizations at SRU competed against each other in various events, celebrating and promoting the Greek Life community at SRU and, most importantly, supporting charities.

"The students put a lot of time and effort into having a successful week that really showcases the hard work that they do throughout the year," said Natalie Polana, a student affairs in higher education graduate student from Freeport and graduate assistant in SRU's Center for Student Involvement and Leadership. "This allows them to come together as a Greek community and celebrate their leadership opportunities and the relationships that they've fostered."

For a second straight year, nearly 400 students who compile SRU's seven fraternities and six sororities rallied together to raise funds for "Morgan's Army," a fund established to support Morgan Yoney, a former SRU student and Alpha Sigma Tau member. Yoney, who attended SRU from 2012-13, has cystic fibrosis and, after receiving a double lung transplant, was diagnosed in 2013 with humeral rejection of the lungs and steroidal rejection of the liver. She is currently waiting to receive a second double lung transplant.

"The students enjoy the sense of competition throughout the week, but ultimately they are most excited about being able to raise money for Morgan and to help her fight the battle she is fighting," Polana said.

In addition to Morgan's Army, the Greek community contributed more than 1,000 canned goods to the Slippery Rock Feed My Sheep food pantry through a Can Castle decorating competition. Also, students collected 1,300 books that were donated to the Slippery Rock Community Library.

For additional information on the CSIL, Greek Week or fraternities and sororities at SRU, contact Jayne Piskorik, program coordinator for Greek Life and student organizations, at: 724.738.2030 or jayne.piskorik@sru.edu.