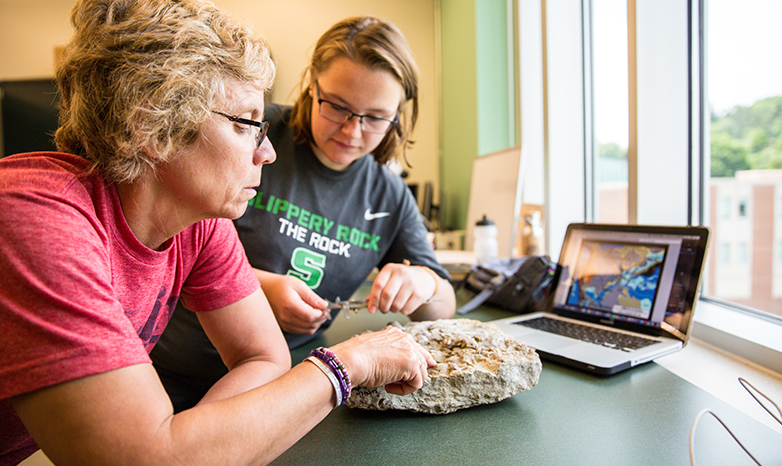 SLIPPERY ROCK, Pa. - Slippery Rock University student Katie Schlea, a junior environmental geoscience and physics major from Stow, Ohio, says the Carnegie Museum of Natural History in Pittsburgh is "one of the coolest places to visit." Having only made two previous visits, both in the last year, Schlea is now conducting behind-the-scenes research at the museum that will make future visits for others even cooler.

Funded by a $725 Summer Undergraduate Research Experience grant, Schlea is studying the fossil Lagerstatten, a collection of a rare, well-preserved fossil assemblages maintained at the Carnegie Museum. Schlea will analyze thousands of fossil samples and plot them on a paleogeographic map that the museum will use for its exhibits.

Although the assemblages of Lagerstatten, a German word that means "a place of storage," have been kept at the museum since the early 1900s, the fossil data available to the public is not modern. The Lagerstatten consists of 12 different assemblages taken from varying places around the world. The fossils are exclusively from invertebrates, such as coral, mollusks and trilobites. 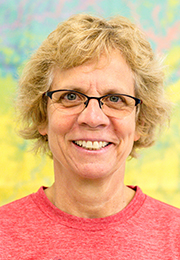 "Museums are starting to become a lot more interactive," said Tamra Schiappa, SRU associate professor of geography, geology and the environment. "They're trying to educate the public on the importance of these fossils and what these fossils can actually tell us instead of having just a very static display."

That's where Schlea comes in.

As many as three days per week during the summer, she will photograph samples, identify their age and other characteristics and provide the museum with information about where they were deposited compared to where they were unearthed. For example, a fossil dug up in Kansas might have been from a water basin that existed 500 million years ago when the shapes of the continents were very different than they are today.

"It helps us understand the different ecosystems in which they lived, the climate and the habitats," said Schlea, who analyzes approximately 100 fossils per day from more than 6,000 samples that range from 62 to 540 million years old.

"A project such as this helps us understand the evolution of life over time," Schiappa said. "We have these perfect glimpses that allow us to answer questions, like 'What was climate like?', 'Was it warm or cold?' The research questions are endless, so (Katie's) just getting started."

Once her research concludes, Schlea could potentially present her research at the Pittsburgh Geological Society's Student Night and the Slippery Rock University Research Symposium in the spring. Schiappa is the vice president on the PGS board of directors and Albert Kollar, the Carnegie Museum's collection manager, is a former president. Together they helped connect Schlea to the research opportunity, which is something that she isn't taking for granted.

"This is the coolest thing I've ever done in my life," Schlea said. "The first day Dr. Schiappa took me back (in the research lab at the museum) I was just amazed. I admit, I geeked out a little."