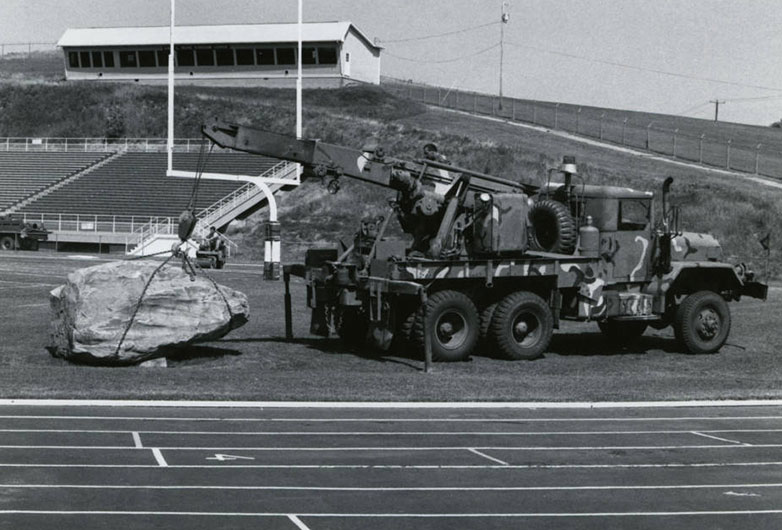 The 319th Army Engineer Unit from Butler relocated “the rock” to its current home at Mihalik-Thompson Stadium in 1988.

SLIPPERY ROCK, Pa.- Regardless of the opponent, the weather conditions or the level of rivalry, there has been one constant at Slippery Rock University home football games for many years - the rock.

No, we're not talking about Hollywood star Dwayne "The Rock" Johnson, although he can be heard on the public address system asking fans if they can "smell what The Rock is cooking?" before the team hits the field.

We're talking about the rock. The one located in the south end zone, nearest the home side of the field at Mihalik-Thompson Stadium.

You know the one ... just about every SRU football player touches it for good luck before kickoff; the cheerleaders lay hands on it after every score; and countless selfies have been taken with it.

But while those in attendance may know of the rock, they probably don't know how it got to SRU in the first place. 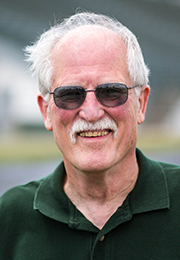 Enter John Woitas and friends. Woitas, a 1968 graduate with a bachelor's degree in secondary education/mathematics, was one of five fraternity brothers from Sigma Pi that arranged transport of the rock from a nearby quarry to the campus in 1965.

"Everyone associated with the University was always saying something about 'the rock,' but there wasn't a single one on campus," said Woitas. "We were just hanging out in our living room one night and when the question was asked and answered, we agreed that The Rock needed a rock."

The brothers - who also included Ruddy Wittman, '67, psychology; Howard Hammonds, '68, physical education; Steve Steiner, '69, physical education; and a fifth man who none of the other four men can recall - drove to the Kinzua Dam site along the Allegheny River in Warren County, roughly three hours from campus. Woitas said there were three rocks sitting directly in front of the excavating area when they arrived to the site. "We picked the one we did because it seemed to have character," he said.

According to Woitas, one of the brothers had a connection to The Hunkin Company that was doing excavation work at the dam. They agreed to transport the handpicked rock to campus via a lowboy trailer.

Upon its arrival, the rock was situated at Old Thompson Field, where the football team practiced and competed until moving to Mihalik-Thompson Stadium in 1974. It would be 14 years before the rock rejoined the team. It was relocated to its current location by the 319th Army Engineer Unit from Butler in 1988.

Woitas, a retired mathematics teacher, said he always smiles when he sees the rock at SRU football games as his family continues its long association with the University.

Woitas' daughter, Kelly Woitas, graduated in 1994 with a degree in music education, and his granddaughter, Shawna Sefton from Cabot, is an elementary education major and a member of the Marching Pride.

"That rock was the source of many pranks," Woitas said with a laugh. "I can't tell you how many times it got oiled, so people couldn't climb on it. And it got painted ... we never did find out who painted it IUP maroon and white."