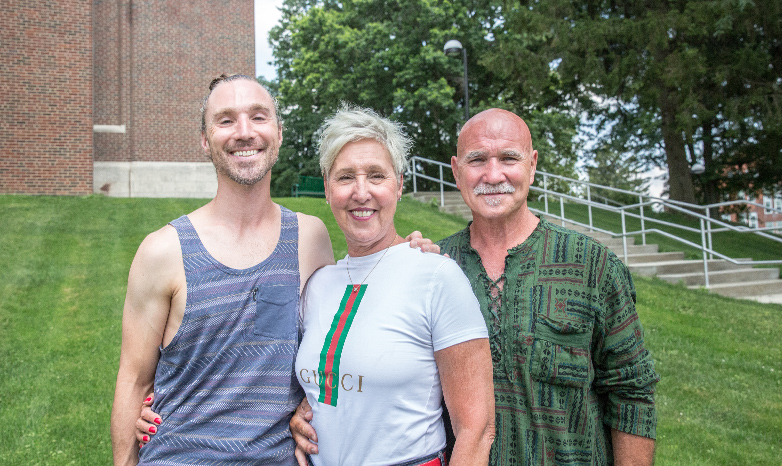 (From left) Jesse, Rebecca and Terry Factor recently staged a family reunion at Slippery Rock University. For alumni Terry and Rebecca, the trek to SRU from Istanbul, Turkey provided the couple’s first visit to the University since 2013.

SLIPPERY ROCK, Pa. - Where else but at Slippery Rock University could the headmaster of an elite, private high school in Turkey visit with a dance instructor from Iowa - who just happens to be his son?

Terry and Rebecca Factor met as SRU students in the 1970s. It just so happened that their son, Jesse, was invited to teach at the Forge Summer Dance Intensive, a two-week training workshop hosted by the department, July 10-21.

"For my son to come back and do a summer intensive here, it's just cool," said Terry Factor, who lives in Istanbul, Turkey, and last visited SRU in 2013. "It sort of gets closure in a way for us."

Jesse Factor spent the last 15 years as professional dancer, including four years on the North American tour of "Cats." Now pursuing a dance teaching career, he is enrolled at the University of Iowa, where he will earn a Master of Fine Arts in dance. He was a student in a class that had a visiting instructor from SRU's Dance Department, Lindsay Viatori, herself a 2014 graduate of Iowa.

After hearing about Jesse's connection to SRU, Viatori invited him to the Forge Summer Dance Intensive, where he taught attendees the Martha Graham technique, a modern dance movement style and pedagogy created by the American dancer and choreographer of the same name that became popular in the 1930s and 40s.

"Sort of the same way Picasso changed art and Stravinsky changed music, Martha Graham changed dance," Jesse said. "I teach the technique so we (did) a demonstration of what the students have learned over the last two weeks. I've really enjoyed it. People are so friendly here and my parents were able to come and visit so it's really great."

Terry and Rebecca, both 1974 SRU graduates, as well as parents of the workshop attendees and other invited guests, attended an hour-long informal showing on the final day of the workshop at the McKay Education Building, during which Jesse explained the techniques and skills performed by the dancers.

For Terry, it was his first visit to the University since 2013, when his 1973 SRU football team celebrated the 40-year anniversary of its Pennsylvania State Athletic Conference Championship. Terry, an All-American linebacker and an Academic All-American in 1973, posted 186 tackles, a SRU single-season record.

"We got the ball rolling with SRU football, raising the level of awareness (of SRU) as an institution of higher education, both for athletics and academics," Terry said. "It's really rewarding to see the University (still) thriving like it is."

Terry went on to work in special education and public education and, along with his wife, the Peace Corps. In the late 1980s, the Factors sold everything and moved from Mercer to Ecuador.

"If there's an opportunity to help or create opportunities for people, it's just in my nature," Terry said. "We embarked upon a journey of working internationally for the better part of the last 30 years."

After several ventures outside the U.S., including opening a school in Qatar, Terry became the headmaster at the Uskudar American Academy in 1997, a role he's held off and on since, but continuously serves as a consultant. Uskudar, which houses grades 8-12, accepts only the top 1 percent of students based on the Turkish national high school entrance exam. With an enrollment of 840 students, all of its graduates attend college, including 40 percent at universities in the U.S., ranging from Ivy League schools to other selective institutions for programs in science and engineering.

A constant in his career, according to Terry, is a "spirit of exploration," which he said was sparked at SRU when he was interviewed for an article that appeared in the 1973 homecoming program.

"I was asked the question, 'What do you want to do with your life?,'" Terry said. "My response was, 'I want to experience as much of life as possible.' I'll never forget that."

His recent visit to SRU was yet another experience, but it was also a reminder that his son is taking the same approach to life as his father.