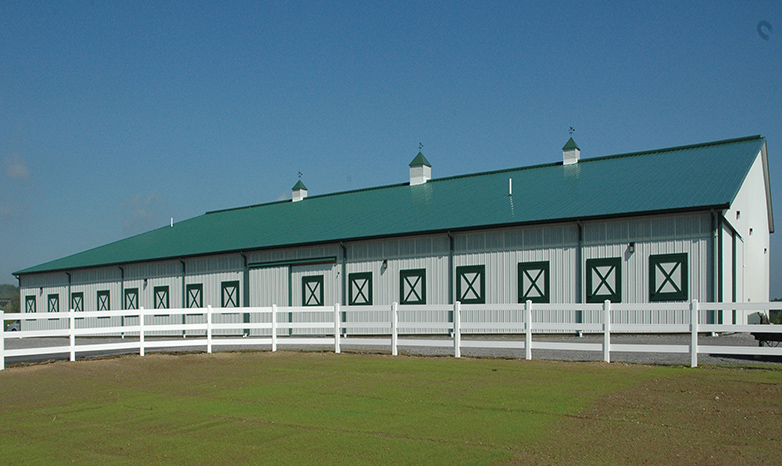 The Storm Harbor Equestrian Center at Slippery Rock University was recently the recipient of a pair of donations, totaling $900,000, from the Rathburn and Rizza families.

SLIPPERY ROCK, Pa. - The Storm Harbor Equestrian Center at Slippery Rock University is a shining example of how equine-assisted programs can improve the lives of a variety of individuals. Storm Harbor will be able to shine even brighter and reach more groups, thanks to donations from two families that will allow for additional staff and the facility's first expansion since it opened 12 years ago.

Gary and Anita Rathburn and Paul and Carolyn Rizza recently committed separate leadership gifts to Storm Harbor. The Rathburns' pledge will green-light a $500,000 project that will expand the facility and the Rizzas' $400,000 contribution will extend Storm Harbor's endowment to nearly $2 million and make it possible to add a full-time staff position.

"The donations are tremendous for our growth, considering how our programs have been expanding over the years," said Courtney Gramlich, who has served as manager of Storm Harbor since 2006, a year after the facility opened. "Both the Rathburns and Rizzas have been instrumental in helping us expand our services, but this will actually expand the building, and we can continue to increase programming and staff."

"Storm Harbor is such a unique facility and resource because there aren't too many therapeutic riding centers in the area," said Samantha Swift, director of development for the Slippery Rock University Foundation, Inc. "We are delighted that the Rathburns and the Rizzas continue to recognize its value and support Storm Harbor with such generous gifts."

The proposed expansion project will add six horse stalls and expand the indoor arena to 80-by-190, enough that a partition can be added and two programs can be conducted simultaneously. Additionally, a new viewing area will be added, along with new bathrooms to meet the needs of the larger facility. To accommodate the increase in programming and care for more horses, full-time staff will be increased from two persons to three persons.

"It's a snowballing effect," Gramlich said. "With more staff we can invite more students, groups and possibly different populations that we're not currently working with."

Based in Tulsa, Oklahoma, the Rathburns are loyal supporters of Storm Harbor, having made previous leadership gifts to the endowment and donating money needed to add radiant heating to the indoor arena in 2011 that allowed the facility to operate more effectively in the winter months. Anita Rathburn is a 1972 SRU graduate.

Paul and Carolyn Rizza are professors emeriti at SRU from Grove City. Paul was professor of geography and environmental studies from 1972-98 and Carolyn was a professor of sociology and social work from 1975-99. She serves as the chair of the Storm Harbor Advisory Board. The couple, founding donors of the center, have previously contributed leadership gifts to the center's endowment. Storm Harbor is named after a horse they once owned.

"I can't thank either family enough for all their donations over the years," Gramlich said. "I don't think they even realize the impact they have on the program in terms of getting more people in the building and rallying support for other people who want to donate."

Construction on the center's expansion project is expected to begin in 2018.