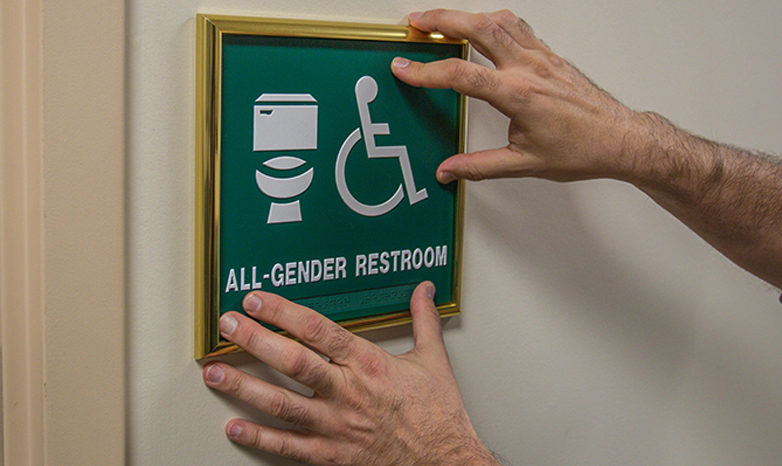 SLIPPERY ROCK, Pa. - In a continuing effort to extend its commitment to diversity, equality and inclusion, Slippery Rock University has converted more than 70 single-occupancy restrooms to all-gender restrooms. The restrooms are located in 35 campus buildings.

"On a practical level, this move makes the University a more welcoming place for transgender persons," said Holly McCoy, assistant vice president for diversity and equal opportunity and the University's Title IX coordinator. "They no longer have to think about whether or not they can safely use the restroom of their choice, they just can. On a more symbolic level, it shows that while we still have a lot of work to do, we have taken a step forward for transgender individuals on our campus."

McCoy said that representatives from a number of University departments and groups, including: facilities, student affairs, diversity and equal opportunity and the President's Commission on Gender Identity and Sexual Orientation, met throughout the summer to discuss the topic and how to make access available in each campus building.

"It made sense to start with the single-occupancy units as it allowed a very high percentage of coverage throughout the majority of our buildings," said McCoy. "We still have a few that are under review because some buildings simply didn't have that style of restroom to manage, but we are discussing how to retrofit those areas and make facilities accessible to all genders."

An all-gender restroom, also known as a gender-inclusive restroom, can benefit many different people, including parents with differently gendered children, alter-abled people who may require the accompaniment of an attendant of a different gender and trans and gender non-conforming people.

Signage for the revamped restrooms features the text "All-Gender Restroom" accompanied by two pictograms - one of a toilet and one of the International Symbol of Access, signifying that the unit is accessible to wheelchair users.

"There was a lot of discussion on the signage front," said McCoy. "To use the male and female pictograms is very gender binary and the half male, half female pictogram is very insulting to the transgender community. As there isn't a graphic that truly encompasses all gender identities, we felt we would simply display the purpose of the room rather than exclude anyone."

SRU President Cheryl Norton remarked on the University's environment of inclusion and equality: "We continually review all potential issues that may have an impact on our student population. Part of our duty is to make sure that all students, faculty, staff and visitors are treated fairly and feel that they are respected and in an environment that is free from discrimination and harassment."