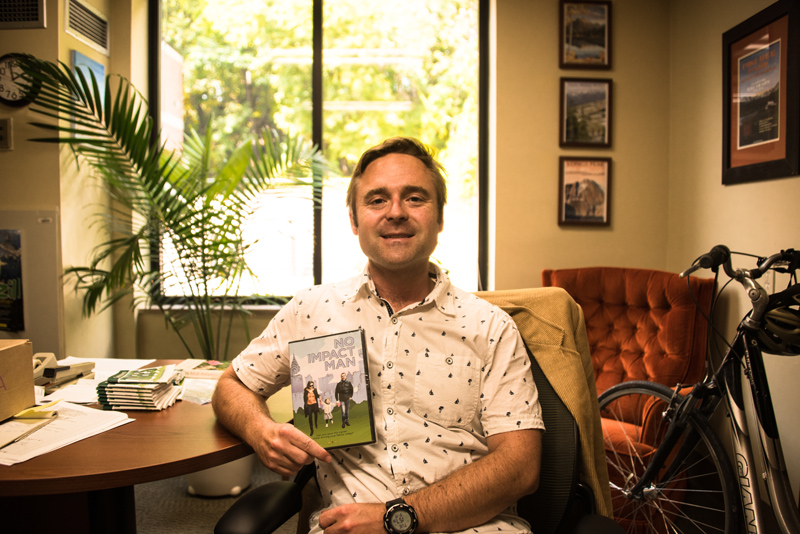 Following a showing of the film “No Impact Man,” Sept. 21, a series of events as part of No Impact Week, Sept. 24-29, will encourage participants to have minimal or no impact on the environment.

SLIPPERY ROCK, Pa. - A week of sustainability events at Slippery Rock University is intended to have a big impact on students' lifestyles but not on their environment.

As part of the President's Commission on Wellness, the SRU Parks, Conservation and Recreational Therapy Department is hosting No Impact Week to promote environmental wellness. To prepare participants to have minimal or no impact on the environment, such as limiting their carbon footprint, there will be a free showing of the film "No Impact Man," at 6 p.m., Sept. 21 in the Smith Student Center theater, which will be followed by a workshop and discussion about events planned for No Impact Week, Sept. 24-29.

"No Impact Man" is a 2009 documentary film based on the book by Colin Beavan, who conducted a year-long experiment to have zero impact on the environment.

"We want to have people rethink their different habits to be more sustainable," said Shawn Davis, assistant professor of parks, conservation and recreational therapy. "We turned it into a one-week project where we do similar (experiments) and day-by-day we try to have no impact or at least minimize our impact on different areas of the environment."

In addition to the documentary screening, other events planned for the week include:

-Minimize Waste Compost Workshop, 6-8 p.m., Sept. 25 at the Macoskey Center. Learn how to compost food scraps back into the soil and how to make a simple compost bin out of reused materials. Door prize winners will receive composting bins and supplies.

-No Electricity Campfire, 8-10 p.m., Sept. 28 at the SRU Ski Lodge. Enjoy a night away from your television and electronic devices by sitting around a campfire. Acoustic music, games and conversations will provide the entertainment.

-"Flow" documentary, 8-10 p.m., Sept. 29 at the Macoskey Center. There will be a screening of the documentary film "Flow: For the Love of Water," followed by a discussion about water conservation, the bottled water industry and other topics related to "water justice."

Davis has administered programming similar to No Impact Week before and those who participated were often surprised and transformed by the experience.

"People often look at choosing to be more environmentally conscience as giving things up and that it's a lot of work," said Davis, noting changes in diet, exercise and reliance on electronic devices. "What people find as they do more conservation-based activities is that it's not that difficult and they learn there's a lot of benefits beyond just conserving the environment. It's becoming a happier, healthier person."

No Impact Week, according to Paul Scanlon, director of sustainability, will help students develop habits and awareness that they can use in October for Campus Sustainability Month, a month recognized by the Association for the Advancement of Sustainability in Higher Education.

SRU participates in an AASHE reporting system to benchmark progress that has led to SRU being recognized as a "Green College" by The Princeton Review, a "Cool School" by the Sierra Club and with a Green Ribbon School Postsecondary Sustainability Award by the U.S. Department of Education. Additionally, SRU has a Climate Action Plan to achieve carbon neutrality by the year 2037.

"We've done so much with our buildings to conserve energy that we are reaching the point of diminishing returns," Scanlon said. "Now we're trying to focus on changing behaviors."

The behaviors Scanlon cites are conserving energy, paper and water around campus. For example, during a recent energy audit he discovered that if SRU students reduced their shower time by five minutes, the University would save 1,000 tons of greenhouse gas emissions per year, which is the equivalent to 22,000 trees.

While No Impact Week and Campus Sustainability Month are occasions that have end points on the calendar, Scanlon said students can apply what they learn beyond the campus community and into the future.

"Students are going to take what they learn with them when they graduate and have their own household to pay utility bills or their own business to create a more sustainable business model," Scanlon said. "(Sustainability behavior) saves money and it reduces emissions."