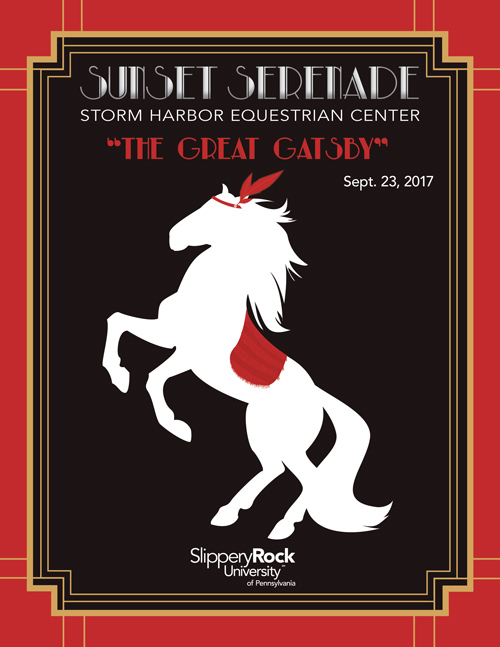 Sunset Serenade, the annual fundraising event for Slippery Rock
University’s Storm Harbor Equestrian Center, raised more than
$140,000 and was attended by more than 400 people in 2017.

SLIPPERY ROCK, Pa. - The sun may have set on yet another successful fundraising event for Slippery Rock University's Storm Harbor Equestrian Center, but organizers continue to sing the praises for Sunset Serenade and its supporters.

This year's Sunset Serenade, Sept. 23 at Storm Harbor, raised more than $140,000, the second highest amount in the 11-year history of the event, and exceeded the goal of $100,000. Additionally, the 405 attendees surpassed all previous years' attendance figures.

"It keeps getting better every year," said Courtney Gramlich, manager of the Storm Harbor Equestrian Center. "People were practically knocking down the door to come in."

Gramlich credits the nice weather, courtesy of a September date that was a few weeks earlier than previous years, and an expanded menu among the many reasons why this year's Sunset Serenade was such a rousing success.

The theme of this year's event was "The Great Gatsby," with a 1920s-era and Jazz-style motif. AVI Foodsystems provided food stations, the local band, The Whiskey Gents, performed and there were live and silent auctions and raffle drawings with prizes ranging from kayaks and area rugs to sports tickets and autographed memorabilia.

However, the main reason the event is thriving is because supporters recognize the importance of Storm Harbor to the community, Gramlich said.

"The community sees that this is a nice place for people with disabilities to come and receive services," said Gramlich. "They are backing us and people see we are helping as many people as we can from many different populations."

Storm Harbor provides equine-assisted activities and equine-assisted therapies for children and adults with disabilities for people from more than six counties. There's a waiting list for services as Storm Harbor continues raise funds to expand operations.

The Sunset Serenade event provides funds for operations, the endowment and scholarships, which provide riding lessons to those who qualify for financial assistance.

"(Sunset Serenade) means a tremendous amount in terms of funding," said Gramlich. "About one half of our riders ride with some sort of scholarship funding. Without this fundraiser, we wouldn't be able to do that."

William Gruver, a 12-year-old from Clarion whose recreational activities are limited because of spina bifida, rides horses at Storm Harbor once a week. He spoke at the event, explaining how much he benefits from Storm Harbor, especially when he has his birthday party there each year and he is able to not only participate in an activity alongside his friends but outperform them as well.

Storm Harbor's endowment, now more than $1.4 million, will be able to fund additional staff at the facility once it grows further. Separate funding announced in August, which included gifts from Gary and Anita Rathburn and Paul and Carolyn Rizza totaling $900,000, will allow Storm Harbor to expand in 2018. The facility currently consists of 12 horse stalls, an 80-by-130-foot indoor riding arena and a 120-by-220-foot outdoor riding arena.

For more information about Storm Harbor or Sunset Serenade, contact Gramlich at 724.738.4010 or courtney.gramlich@sru.edu.