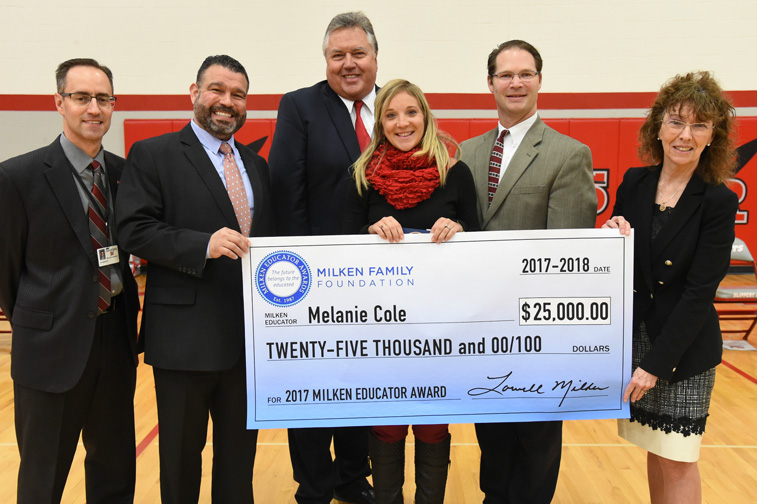 SLIPPERY ROCK, Pa. - The prize money for the Milken Educator Award, considered the Oscar for teaching, was revealed at an impromptu school assembly at Slippery Rock Area High School last month. Students turned over placards showing each digit for $250, then another was added for $2,500 and another for $25,000.

Then, the winner's name was drawn from an envelope and, sitting in the corner of the gymnasium, Melanie Cole was astonished when her name was read.

"I was obviously overwhelmed and very surprised," said Cole, a special education teacher/transition coordinator, who earned her master's degree in special education from Slippery Rock University in 2012. "I was sitting with one of my coworkers rattling off names of people who I thought were going to get it. I never thought my name would be called. It was one of the best moments of my life to be able to celebrate it with a district that I have invested in and grown to love."

While only a few people knew the purpose of the assembly, the dignitaries gathered on the dais with district administrators should have raised a few eyebrows. Pedro Rivera, Pennsylvania's secretary of education; Sen. Scott Hutchinson, R-Pa.; Philip Way, SRU interim president; Keith Dils, dean of SRU's College of Education; and Jane Foley of the Milken Family Foundation were all in attendance.

For the last 30 years, the Milken Family Foundation has recognized and awarded unrestricted funds to the top educators in the country. Last year, the foundation surprised 33 teachers with $25,000 checks and so far this year Cole was the 16th recipient.

"It's nice for our students to see an educator be recognized and know that they can work for a moment like that in their own lives," Cole said. "We're just doing our jobs and hopefully that will be inspiring to them."

Sourced through a confidential selection process from panelists appointed by state education departments, Milken Educator Award recipients are early- to mid-career educators in elementary and secondary schools whose exceptional talent and accomplishments have gone unheralded but are worthy of the spotlight.

Cole, nee Roczko, is in her 11th year as a special education teacher at Slippery Rock Area High School, including the last three as the transition coordinator. In her role, she provides learning support for approximately 100 students in grades 9-12 and prepares them for their future, whether it be at a post-secondary educational institution, in the military or competitive employment.

"Just so they have a plan," Cole said. "By the time they are seniors, I really know the students and the path that they're taking."

Additionally, Cole instructs about 25 seniors for one period each day in a career planning class; runs the high school's community-based vocational training program; is the coordinator of the school's chapter of the National Honor Society; and is the head coach of the girls varsity soccer team. She's also involved with many special education, physical education, wellness and community programs, as well the Interscholastic Unified Sports initiative, where students with and without intellectual disabilities come together to compete against neighboring schools in soccer, bocce and track.

After Cole graduated with her bachelor's degree from La Roche College in 2006, she was hired by Slippery Rock Area High School. Cole took online classes through SRU to earn her master's degree (2012) and a special education supervision certificate (2017). She benefited by having access to faculty and resources who were literally across the street from her office.

One of those faculty members is Joe Merhaut, SRU associate professor of special education and department chair, who was once Cole's principal at Hampton High School in Allison Park.

"I recall Melanie from way back and she was always a happy student who was really involved and you just knew she was going to be one of those kids who was going to be very successful," Merhaut said. "I'm so proud of her and happy to see she won the award."

SRU's online master's degree in special education has been ranked among the top 25 programs in the country by thebestcolleges.org. More than 300 students are enrolled in the 36-credit program that can be completed in as little as one year. SRU offers a quartet of special education concentrations, including: autism, birth to grade 8, grade 7-12 and school supervision.

"Our students are really excelling in our online master's program," said Merhaut. "We have committed professors who have been trained, and continue to train, in online instruction. We are producing a lot of good people. Another good thing is we have people coming into our online program who don't have special education background, but they come to learn those skills so they can teach special ed."

Having that type of versatility has benefitted Cole as well.

"On a daily basis I have an interaction with a student, positive or negative, that lets me know that what I'm doing is of value to them," said Cole, who appreciates working with both special education students and the general student population.

As for the value of the Milken award, money she can use however she likes, Cole won't be retiring any time soon, which is what one of her students feared. That begs the question: how many more students holding zeros behind the $25,000 would it take for her to retire?

"I don't think any amount of money would ever stop me from teaching," Cole said. "In education, we don't do it for the money."