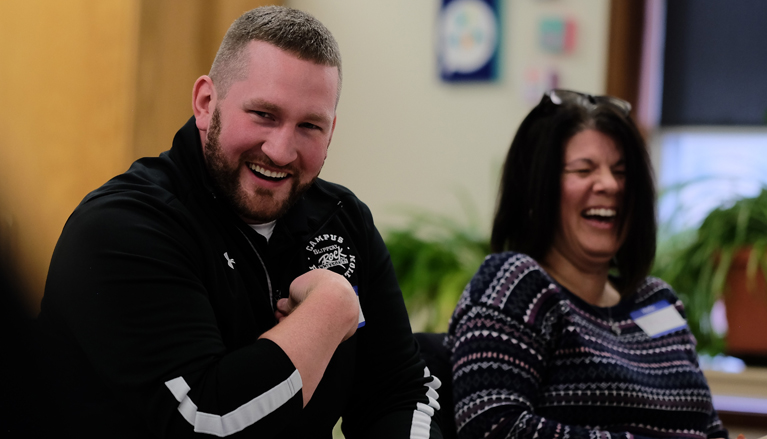 Slippery Rock University employees share a laugh during a recent health and wellness workshop called “Laughter: It Really is the Best Medicine.” The workshop was led by Colleen Cooke, professor of parks, conservation and recreational therapy, a student in the Association for Applied and Therapeutic Humor’s program to become a certified humor professional.

SLIPPERY ROCK, Pa. - Practicing yoga has mental and physical benefits, but a recent health and wellness workshop at Slippery Rock University had a similar response from participants who instead practiced Yogi, as in the cartoon bear fond of stealing "pic-a-nic" baskets.

Having people address each other with a hearty "Hey, Boo Boo" and many other laughter-inducing exercises are all part of Colleen Cooke's therapeutic activities to show how humor can improve quality of life.

"Laughter has a physiological and emotional impact on our health," said Cooke, SRU professor of parks, conservation and recreational therapy. "If people are willing to engage in humor, they are going to be healthier, but also people feel kindness through laughter and we're just nicer to each other because of laughter." 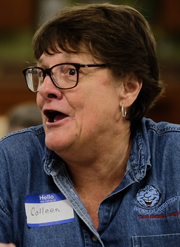 Cooke, who is a student in the Association for Applied and Therapeutic Humor's program to become a certified humor professional, shared some of her experiments and research in a professional development workshop for SRU employees titled "Laughter: It Really is the Best Medicine!" She also uses laughter exercises in her classes and as part of an intervention research project for patients with mental illness to demonstrate laughter's relationship with neuroscience and the value humor has on people's daily lives.

"It's really hard to feel bad when you are laughing," Cooke said. "Distressing feelings tend to take a backseat when we are laughing. Positive energy is released, and when we release positive energy, it's a lot easier for us to focus on whatever it is we need to focus on."

Laughter is also good exercise, Cooke said, because it uses a lot of muscles, regulates blood pressure and decreases the body's production of stress hormones. Positive effects can also be achieved through forced laughter, such as when Cooke had University employees exchange pleasantries using the Hawaiian greeting "aloha," but with added and repeated emphasis on the "ha," as in "ah-looo-hahahaha!"

Among the participating SRU employees were campus recreation staff members, who scheduled their weekly meeting to coincide with the workshop.

"The workshop was a good opportunity for us to have a mini-field trip, learn together, laugh together and have fun," said Karen Perry, director of campus recreation. "This type of workshop also allows for a contagious energy to be shared with our student staff and patrons that is good for customer service. Laughter is necessary in the workplace."

Cooke also had the group share jokes and funny stories, and even more absurdities beyond cartoon voices, such as pretending as if they had ants in their pants or arranging their chairs to pretend like they were riding a rollercoaster.

There are methods to her madness, however. Cooke explained the different theories of why people laugh, such as relieving nervous energy, an intellectual reaction to something unexpected or a simple response to something pleasurable.

Cooke also had participants rate how they feel on a rubric scale before and after the session to measure the effects laughter has on quality of life. Similarly, Cooke recently led laughter therapy sessions with 12 schizophrenia patients during a three-week study, having them rate their happiness and complete a quality life assessment used by the World Health Organization. Cooke's research, conducted with Emily Aldridge, a junior recreational therapy major from Huntley, Illinois, has yet to be published, but it showed "positive, trending results" for laughter therapy's effectiveness despite its small sample size, according to Cooke.

Other studies, including a survey by the University of Southern California's Institute for Genetic Medicine, have shown the benefits of laughter therapy. Seventy-five percent of participants who rated their stress level as "extremely stressed" in the USC study saw a radical mood shift, rating themselves as "not stressed" after consuming laughter.

Laughter can improve people’s mental and physical health, but Cooke emphasizes that it can also improve the way people relate to each other.

"The goal is to bring peace to our interactions with other people through laughter," Cooke said. "Laughter brings us together."