Harrisburg - The Board of Governors of Pennsylvania's State System of Higher Education today unanimously selected Dr. William J. Behre, provost of Georgian Court University, to be the next president of Slippery Rock University of Pennsylvania, effective July 1. Dr. Behre will be introduced to the university community, including students, faculty, staff and others, during a welcoming reception to be held at 11 a.m., March 22, in the ballroom of the Smith Student Center.

Dr. Behre has nearly 25 years experience in higher education, including as an educator, researcher, faculty leader and administrator. He has served as Georgian Court's chief academic officer since February 2014. 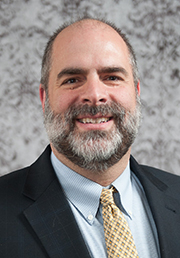 "Dr. Behre has had an impressive academic career," said Board of Governors Chairwoman Cynthia D. Shapira. "He will bring a vast array of experience to his new role as president of Slippery Rock. We are confident he will provide the university the kind of leadership necessary to enable it to continue to advance its mission and to ensure student success."

As provost at Georgian Court, a small, private university in Lakewood, N.J., Dr. Behre works closely with deans, department chairs and the president's cabinet. He is responsible for academic program development and review; research and sponsored projects; and faculty development.

The university increased its student retention rates over the last three years, expanded the number of articulation agreements with community colleges and high schools, rewrote its general education curriculum and developed its first doctoral program, among other accomplishments.

"Dr. Behre is an outstanding teacher, scholar and university leader who has clearly demonstrated a commitment to student success and an ability to work collaboratively and effectively with the entire university community," said State System Chancellor Dr. Karen M. Whitney. "He is simply the very best person to lead Slippery Rock University at this important time. I am thrilled that he will be joining our leadership team."

Dr. Behre called Slippery Rock "an extraordinary place" and said he is honored to have been selected to serve as the university's next president.

"I look forward to collaborating with faculty, staff and students to continue to build upon the excellent work that is already taking place on campus," he said. "My wife Leah and I are excited about returning to Pennsylvania, moving to campus and getting to know our new community."

The Board's action today comes at the conclusion of a national search for a successor to Dr. Cheryl Norton, who retired in July 2017 after serving as Slippery Rock's president for five years. Dr. Philip K. Way, the university's former provost and vice president for academic and student affairs, has been serving as interim president since last summer.

Council of Trustees Chair William McCarrier said he is "excited" about the selection of Dr. Behre to serve as the university's 17th president.

"Slippery Rock has become a great university and I believe that Dr. Behre has the necessary qualifications and experience to lead us to even higher plateaus of excellence," Mr. McCarrier said. "We are anxiously looking forward to his assuming the leadership of SRU."

"Dr. Behre already has a deep understanding of the university's mission, vision and values, and possesses the desired qualities to be the next president," said council member Jeff Smith, who chaired the presidential search committee. "His career progression from the public school system to being the provost at Georgian Court University has given Dr. Behre the insight into what is required to continue Slippery Rock's tradition of excellence and advance our effort to deliver a high-quality, student-centered educational experience."

Dr. Behre previously spent more than 16 years at The College of New Jersey in Ewing, N.J., one of eight regional senior colleges in the New Jersey state system. While there, he held various positions, including vice provost; assistant vice president of the Division of College Advancement; dean of the School of Education; and chair of the Department of Special Education, Language and Literacy. He was hired as an assistant professor in 1997 and rose through the faculty ranks to become a full professor in 2006.

Dr. Behre began his career in higher education as a research assistant and instructor at the University of Michigan in 1993 while he was working on his doctoral degree. Previously, he was a special education teacher in Brooklyn, N.Y., for four years, and worked in public relations for Burson-Marsteller in New York City for two years.

He has been awarded several research grants, has authored or co-authored numerous scholarly papers and has served as a reviewer for a number of publications, including Urban Education, The Journal of Moral Education and The American Educational Research Journal. He also has served on the boards of several civic and community organizations, including the New Hope-Solebury School Board in New Hope, Pa., where he was elected to separate terms as president and vice president.

Slippery Rock University of Pennsylvania has a current enrollment of about 8,900 students. It offers 150 majors and minors at the undergraduate level and more than 40 master's and three doctoral degree programs. It was founded as a privately run normal school in 1889 and became a university in 1983, upon the creation of the State System.

SRU's Presidential Search is being conducted according to policy established by Pennsylvania's State System of Higher Education to ensure the process is open and fully inclusive. Membership on the search committee, as outlined by that policy, includes trustees; a university executive; faculty, non-instructional employees; a student; an alumnus; and up to three others from within the University, including students, selected by the trustees, to assure appropriate involvement by constituency, gender, race, generation, etc. In addition, a liaison from the State System chancellor's staff and the president of another State System university serve on the committee as non-voting members.

The Presidential Search Committee invited all members of the University community, alumni, friends and those with an interest in the success of SRU to participate in the presidential selection process by sharing their views on the following questions:

Thank you to everyone who participated and contributed to this effort.

SRU to welcome first of three candidates for president (Sept. 22, 2017)