Do you know where to find an AED on campus? 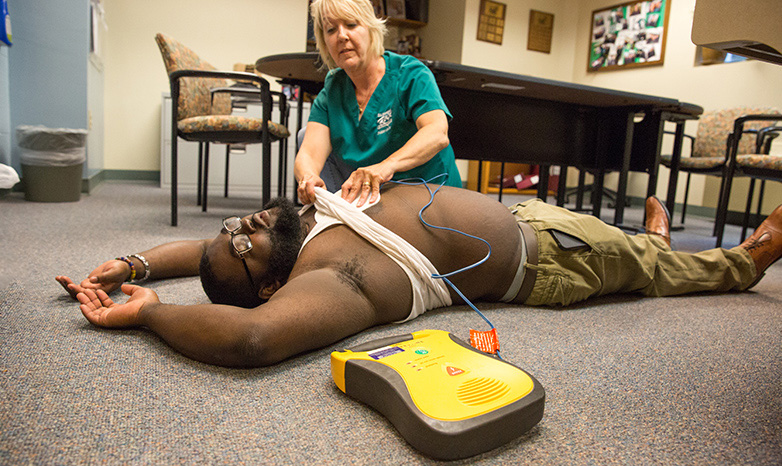 There are 37 automated external defibrillators placed in high traffic areas throughout Slippery Rock University, including the Smith Student Center, Boozel Dining Hall and each of the residence halls and athletic facilities.

SLIPPERY ROCK, Pa. - Quick - do you know where the nearest automated external defibrillator on campus is located? Think carefully, because the answer to this pop-quiz question could be a matter of life and death. 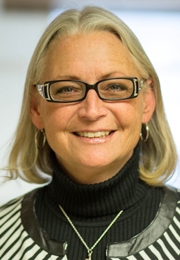 "Wherever I'm going, I'm always scanning for the AED," said Kristina Benkeser, director of Student Health Services. "It's nurse instinct. Let me know where that thing is."

But what about those of us that don't have that nurse instinct?

For Slippery Rock University students, faculty and staff, finding out where the AEDs are located around campus could be critical if they happen upon someone who is unresponsive or under cardiac arrest.

An AED is a portable device, typically mounted on a wall, to treat sudden cardiac arrest. Once applied to a patient, an AED checks the heart rhythm and sends an electric shock to the heart to try to restore a normal rhythm. Although public facilities are not required by a regulatory agency to have AEDs like other emergency devices, such as fire extinguishers, they are becoming more prevalent as schools and workplaces realize their importance.

According to a recent American Heart Association survey, about half of all U.S. employees don't know where their workplace's AED is located. Workers in schools and other education facilities were most likely to be able to find it, at 61 percent, but the AHA survey is a sobering reminder for the need to identify the nearest AED.

"From a prudent, proactive standpoint, AEDs are installed because of the statistics that are out there with these devices saving lives," said Paul Novak, interim executive director of environmental health and safety. "It's a worthwhile investment and the University has a fair amount."

According to the National Safety Council, quick access to an AED by an engaged bystander could increase the odds of survival from 5 percent to 40 percent and higher. The American Red Cross says that for each minute defibrillation is delayed, the chance of survival is reduced approximately 10 percent, which is significant because average response times for first responders is 8-12 minutes.

"It's important to know that they are for the public use," said Novak, who specified that AEDs are a piece of equipment, rather than a service that requires training, like CPR. "People need to remember that AEDs are for the average individual and that's why they are so widespread. They are designed to be used by a person who has no training whatsoever."

Here are some facts and tips about AEDs at SRU:

-There are 37 AEDs on campus placed in high traffic areas such as the second and third floors of the Smith Student Center, Boozel Dining Hall and all of the residence halls and athletic facilities. SRU's Environmental Health and Safety Office inspects all the AEDs each month. A complete list is available on the EHS webpage under "Emergency Management and Preparedness": http://www.sru.edu/offices/environmental-health-and-safety/emergency-management-and-preparedness

-If you are on campus and are in the presence of a person in distress, call 3333, not 911. University Police, who have AED units in their vehicles, can provide the most immediate help to on-campus emergencies. Calling 3333 is the most efficient way to reach first responders.

-Remain calm and take charge. "Somebody has to take charge, so you just take charge," Benkeser said. "You can't assume that someone has called for help. You have to be very clear about it. On your way over to the victim, you point to another person and specifically say, 'You in the green shirt, you call 3333 and have them send an officer; we have someone here who is unconscious.' Then you point to another person and say, 'You in the blue shirt, you find the AED.'" After that, Benkeser added, check to see if the person is breathing and has a pulse.

-According to Benkeser, an AED should be used if someone is not breathing or does not have a pulse. But if there's any doubt, use it. "The machines themselves are risk-free," she said. "You're never going to harm anyone by hooking them up."

-When an AED is activated, prompts appear that guide the user through a very brief step-by-step process starting with the placement of pads on the victim's chest. The AED analyzes the victim's heart rate and determines whether a shock is needed. If the AED does not detect an abnormal heart rhythm, no shock will be delivered. If a shock is needed, the AED will prompt the user to press a button that will deliver the shock.

Novak and environmental health and safety staffers provide AED awareness through different programming around campus, including freshman orientation and during the training of on-campus housing personnel. However, it's important that everyone on campus knows where to find the closest AED, Novak said.

"Some people are more aware of the AEDs than others," Novak added. "No matter where they are, the fact that they're out there is important and needs to be reinforced."