Slippery Rock University is committed to being an inclusive and equitable institution of higher learning for all who live, work and study in our community. And as we pursue continuous improvement in the areas of diversity, equity and inclusion, we define those terms as follows:

At SRU, we envision a University community that empowers individuals, expands opportunities and meaningfully honors all voices in order to cultivate a safe, diverse community and harness its power for change. 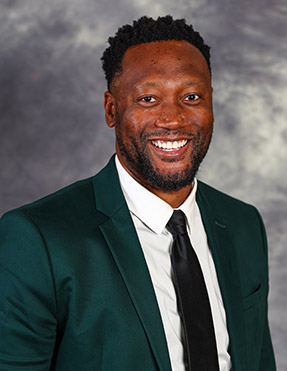 A native of Youngstown, Ohio, Jones was among the first in his family to matriculate and graduate from college. Jones recently earned his doctoral degree in educational leadership and policy studies from Eastern Kentucky University, where he also earned a master's degree in student personnel with a concentration in counseling (2013). His doctoral thesis at EKU focused on why Black males persist and graduate from predominately white institutions. He is also a 2006 graduate of the University of Mount Union with a bachelor's degree in art.

Jones comes to SRU after a three-year stint at Thiel College. While there, he led efforts to foster and maintain an increasingly inclusive environment that "welcomed, embraced, supported and celebrated diversity in all its forms." Jones served as the chair of Thiel's Diversity and Inclusion Advisory Board and worked with the president's office to make sure the college's policies and procedures were inclusive in nature.

"Part of what I do is helping to mentor and guide students through successful college careers that transcend graduation," Jones said. "As a first-generation college student, I understand the significance of potential and maximizing that potential to better one's future. I'm always looking forward to meeting and interacting with parents, faculty, and staff, but most importantly students. I believe, without question, that college students are the building blocks that will broaden many horizons domestically and internationally throughout the communities in which we learn and live."

Our Mission
Our mission is to support and promote academic success while developing multicultural and social competence, civic engagement, and retention of students from historically underrepresented racial/ethnic groups. Our office seeks to identify and eliminate barriers to foster an equitable and diverse environment. Our goal is for all students, faculty, and staff to obtain understanding and cultivate awareness of differences.

Our Values
Freedom of inquiry is at the center of our value system and is the basis from which we study with curiosity, live together with civility, serve society, respect one another, build our community, deepen our faith, express our creativity, and experience our independence in pursuit of truth.