SRU graduating twins look to give entrepreneurship the ‘business’ 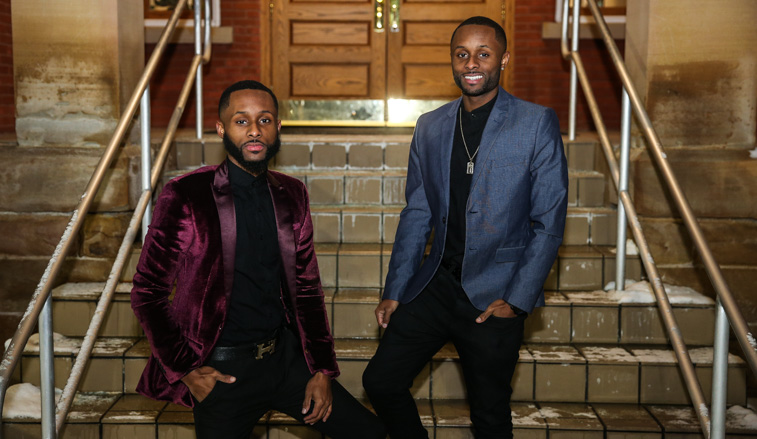 (From left) Twin brothers Elijah and Elisha Hill will graduate together for a third time Dec. 16 when the pair receive their MBA’s at Slippery Rock University’s Winter Commencement Ceremony. The brothers earned undergraduate degrees in business administration: management from SRU in 2016.

SLIPPERY ROCK, Pa. - Friends, teammates, business partners, roommates, brothers and twins. Those are a few of the many terms one could use to describe Elisha and Elijah Hill. The newest, and one that will come courtesy of Slippery Rock University's Dec. 16 commencement ceremony, is that of MBA's.

"We learned to walk together, we learned to talk together and we've learned together," said Elijah Hill. "At the end of the day, it's a great feeling to know that you've got someone that has been by your side since Day One. Someone that you can trust not only in life, but in business; while being able to put your faith in them and now that together, you'll achieve all that you set out to do."

The 2012 graduates of the former Wilkinsburg High School in Pittsburgh have indeed achieved a lot in a short time.

And while the duo sits on the verge of yet another educational milestone, they are becoming just as accomplished outside the classroom as entrepreneurs. The brothers, along with family friend Duane Davis, launched The Levels Agency in 2014. The agency is a marketing, management and entertainment group that stages concerts, festivals and charitable events. In doing so, the Hills have had the opportunity to work with a varied clientele of music artists and professional athletes, including Antonio Brown and Le'Veon Bell.

"We felt it was important to be able to strike out on our own," said Elisha Hill. "Having a regular, 9-to-5 workday is okay, but we figured 'Why not do our own thing?'

"My brother and I are firm believers in having something to pass down in the future and this agency can be that something for us. Growing up, we watched our family and friends struggle (economically) and that isn't what we want for ourselves ... plus, we'd rather not give control of our future to others."

But for all their connectivity as family and classmates, the brothers' futures nearly derailed, which could have produced drastically different employment results had it not been for their "do your own thing" mentality.

When the duo entered SRU, Elisha Hill did so as an athletic training major, while Elijah was undeclared. At the onset of his sophomore year, Elisha Hill made the switch to business administration and convinced his brother to follow him.

But it wasn't a case of educational "follow the leader" by any stretch.

"We each have very different interests," said Elisha Hill. "Growing up we were very different people ... very much individuals. We each had our own, separate group of friends; we never had classes together in high school; and we never dressed alike. It was easy for everyone to tell us apart."

"Without a doubt, he's more laid back and I'm more outspoken," Elijah Hill said with a laugh. "But it works, you know? We piggy back or play off of one another well and despite our differences, we've always been there for each other and will continue to be. He's my partner and by my side every step of the way.

"It just made sense that if we wanted to walk our own path, business would provide the direction."

The brothers will soon be stepping into another business venture, this time as owners of what they are calling a "multipurpose event space" on Pittsburgh's South Side, opening in 2018.

"It's going to be about much more than the 'nightlife,'" said Elijah Hill. "Will it have a club atmosphere on certain nights, sure, but there will be much more to it than that ... we're looking at it being a destination for poetry readings, wedding receptions, spoken word performances and many other things. If we can make it happen, we will make it happen."

"Our time at SRU has been a great platform for us to learn all the angles of business and administration and marketing," Elisha Hill said. "We have a solid educational and experiential foundation, now it's time to take everything we've learned and put it to practical use."