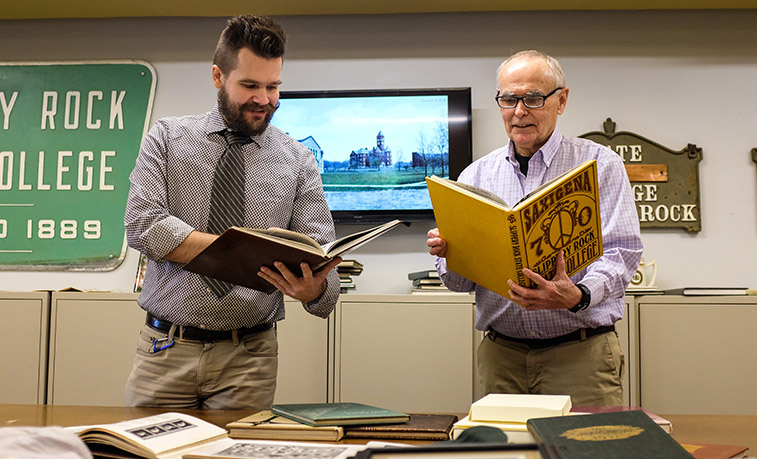 SLIPPERY ROCK, Pa. — Usually, the only places one can access old yearbooks are from a library or, for alumni, by rummaging through storage bins in the attic or at a flea market. That will soon change at Slippery Rock University. Bailey Library is scheduled to digitize the entire collection of the Saxigena, SRU's former yearbook, and make them available online by the end of the spring 2020 semester.

The Saxigena was published continuously from 1911-97, again in 2005 and 2006, and returned in a digital form in 2007 before it was permanently discontinued. While there are already 13 volumes available on the Library's digital collections webpage from a previous digitization project, the remaining 80 editions will be added this spring.

"Yearbooks are the memory books of the institution, providing a record of everything that was going on each year at the University," said Judy Silva, associate professor of library and University archivist. "It's not just the photos of women with bouffant hair, but it's a research tool and you can look back year-by-year and see how things change and people come and go. It's all the things that reflect the era, even the graphic design and the typefaces."

The project to digitize the entire collection involves the contributions of faculty, staff and student workers from Bailey Library's Archives and Special Collections departments, as well as funding from the SRU Alumni Association.

"People love to take a walk down memory lane and this is a great opportunity to share this collective experience with more alumni," said Kelly Bailey, director of alumni engagement, who shared the proposal with the Alumni Association, which then voted to fund the project. "Everyone is excited about helping the project move forward and there was no hesitation. It's fun for people to pull up a yearbook and reminisce about their time at SRU and hopefully that will lead to them coming back to campus and further engaging with the University."

Silva, and library technicians Kevin McLatchy and Jared Negley, are also excited about having yearbooks available online as a teaching resource for students and also to create a more efficient process for staff to assist researchers.

"We're going to use the yearbooks more once they are digitized," Silva said. "Students who come to the library to use them as a primary source can still hold (a yearbook) in their hands, see it, feel it and smell it, but (after the digitization project is complete) they can then go back to their rooms, the Smith Student Center or wherever and continue doing research online."

The process to digitize yearbooks began in 2007 when Silva helped digitize 13 volumes that correlated with five sets of anniversary years for two homecoming celebrations: 1958, 1959, 1968, 1969, 1978, 1979, 1983, 1984, 1988 and 1989. The project was revisited last year by Cassie Frank, instructor of library, with institutional and Alumni Association funding, as well as the efforts of Bailey Library student workers Emily MacIntyre, a sophomore history major from Erie; Jessica Kintigh, a senior dual dance and history major from Greensburg; and John Ferrara, a graduate student majoring in secondary education from Scranton.

Negley and the student workers prepared each yearbook, writing metadata so digital versions can be searchable using keywords. They also created chapters by adding blank pages so the yearbooks can be more easily navigated once digitized. The yearbooks are digitized off-campus by a third-party vendor, Backstage Library Works, which prepares the files and loads them into software so they can be displayed on SRU's digital collections webpage.

Recent advances in scanning technology has made the process more efficient as well. Previously, book's spines had to be removed to scan entire pages, but now companies like Backstage use scanners with a cradle to keep the original source material intact. Also, high-quality scans are color-corrected to prevent the Moire effect, which makes scanned print images appear plaid when viewed digitally.

"There's a lot of work that needs to be done to get the best quality," Silva said. "Having the books digitized will better allow us to respond to requests from researchers. We can send them a link to a particular page or issue and with more material being available to them, they can follow their curiosity."

According to McLatchy, the Saxigena was an extensive book of record for SRU through the 1980s, but in the 1990s a less thorough publication resulted in a loss in popularity among students. Also, as enrollment increased, the task of capturing images and documentation for all students and their clubs and organizations was not sustainable.

"It's a sign of the times," McLatchy said. "People now rely on websites and social media as ways of expressing and experiencing current student life. Perhaps by moving the yearbook collection online people will recognize the importance of preserving the past and recording what the University is like now for future generations."

To view editions of the Saxigena that have already been digitized, click here. For more information about the University's Archives and Special Collections, contact the Bailey Library at 724.738.2058.