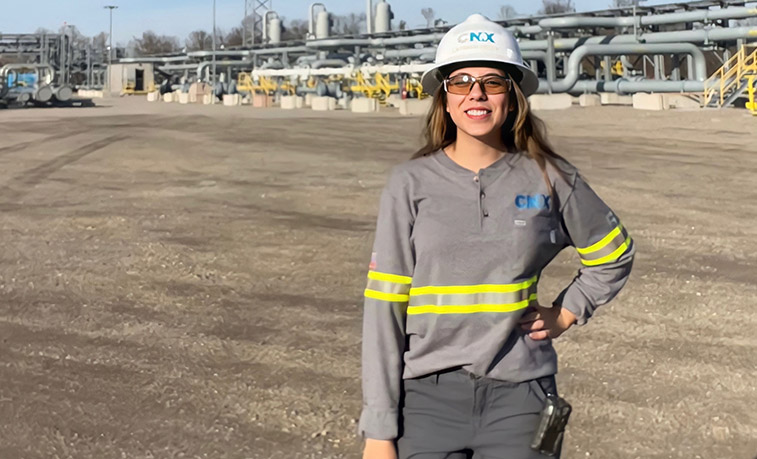 Cayman Kelly, a 2022 Slippery Rock University graduate with a degree in petroleum and natural gas engineering, is an associate engineer at CNX Resources Corporation, a natural gas development, production and midstream company in Canonsburg.

SLIPPERY ROCK, Pa. — Raised by parents who worked blue- and white-collar jobs, Cayman Kelly is a perfect fit for a data analysis role in the petroleum and natural gas industry known for its hard-hat workers. Combining both blue- and white-collar functions, her job can even be considered "green collar" for reducing greenhouse gas emissions. But it took a little refining as a student at Slippery Rock University before she could start her career.

"I come from a background of problem solvers and engineers," said Kelly, a 2022 SRU graduate who is now an associate engineer at CNX Resources in Canonsburg.

Kelly lived on her family's farm in Butler after growing up in Gibsonia. Her father managed his family's window cleaning company and her mother was a software engineer.

"Growing up in this blended household, I value the hard work and dedication from the folks in the office and in the field," Kelly said. "The employees I am surrounded by at work are the sort of people that I have always respected and looked up to."

To become an engineer as part of the CNX New Technologies group, Kelly needed more than genes though. She needed the right education. After starting at Butler County Community College, Kelly transferred to SRU in spring 2020, just before the first cohort of SRU's new petroleum and natural gas engineering program graduated.

"It was clear to me that the professors in our department were laser focused and they worked diligently to improve and expand upon our curriculum to relevant subjects," Kelly said. "My education was truly valuable and applicable to my industry, and it was by far the most affordable option in the region."

SRU's engineering program's four-year tuition, one of the most affordable in the region, is less than half the cost of most schools within a two-hour driving radius.

Rather than paying more to attend an engineering school out of state or one that's focused on theory and graduate-school preparation, Kelly learned practical applications and how she could immediately join the workforce.

"My SRU professors encouraged and empowered me to take on new challenges and prioritized industry experience throughout my education," Kelly said. "They supported me, gave me confidence in my abilities, and pushed me to be a creative problem solver. They were with me every step of the way."

Kelly took her first step as a professional while she still had a foot in the classroom. She began working full-time at CNX as an intern in December 2021 and continued in a dual role as a project manager and an asset development engineer in the Exploration and Production group of the company. After graduating in May 2022, she transitioned to her current role with the New Technologies group.

In her role as associate engineer, Kelly aggregates and analyzes data to support the development team. She helps them estimate costs of projects and conduct market studies for the team to make commercial decisions.

"I build visualizations for management," Kelly said. "I am learning the process of performing feasibility studies and economic evaluations for project evaluations. Once projects become approved, I work through preliminary planning via productive collaborations with project partners, internal groups and outside vendors for expansion of our low carbon-intensity fuels projects. Much of my time is spent either analyzing data or communicating with our teams and other experts to improve accuracy in engineering project assumptions."

"Being a part of these advances in the New Technologies group is exciting and I can't wait to move forward with new projects," Kelly said. "Working in this group and being an innovator in my industry is an honor. I'm very proud of what I do and am excited to see where my career takes me next."

More information about SRU's petroleum and natural gas engineering program is available on the SRU website.