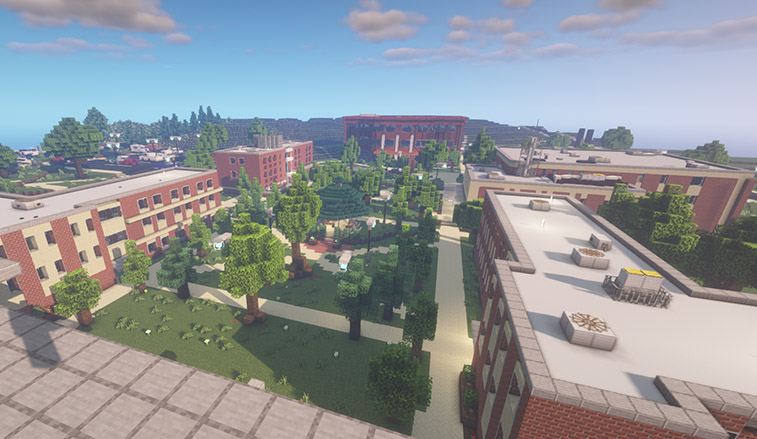 The Quad at Slippery Rock University and other parts of campus are being created by SRU students in a virtual environment using the popular video game Minecraft.

SLIPPERY ROCK, Pa. — A group of Slippery Rock University students are rebuilding SRU's campus brick by brick. There is no mortar or physical construction involved, but rather pixels in the virtual world of Minecraft. The popular video game allows users to build elaborate virtual environments within the game and five students from the Esports Club at SRU chose to recreate the University's campus.

"Considering the pandemic is limiting our range of physical interaction, I thought that it would be a good idea to bring campus to a virtual setting where we can still have that sense of community," said Adam Schultz, a junior dual computing and philosophy major from Emmaus. "Minecraft is about expressing your creativity and one of the main motivations for us is to take advantage of the limitless possibilities of the game. Minecraft gives us a good framework to recreate the campus."

More than 126 million monthly active users play Minecraft, in which players explore and generate three-dimensional worlds that appear as blocks -- think digital Legos -- to build structures and earthworks. Minecraft was created by Mojang Studios and released as a playable game in 2009. It's available across several gaming platforms and computer operating systems, including Xbox One, PlayStation, Nintendo Switch, iOS, Android and Microsoft Windows 10. In 2014, Mojang and the Minecraft intellectual property were purchased by Microsoft for $2.5 billion. 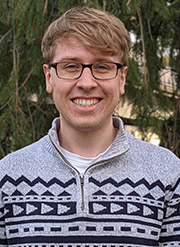 There's a multiplayer feature as well as several game modes, including survival mode, where players acquire resources, maintain health and ultimately battle the Ender Dragon. In spectator mode, users can take virtual photographs and move around the environments, even by flying in the air like a drone, but without interacting with the world.

Schultz is hoping to offer SRU students who play Minecraft a place for a virtual commencement ceremony. Schultz and the club members already built the interior and exterior of Morrow Fieldhouse, a task that Schultz estimates took more than 100 hours to complete. Their first phase of the project was creating The Quad, which included the exteriors of the surrounding buildings.

"We're trying to make it as accurate as possible, but it's difficult because Minecraft is a completely block-oriented world," Schultz said. "We set out a plan of the schematics of the building by using photos, virtual maps and drone videos from the SRU website, as well as images found on Google Images and Google Maps. We want to have as many reference points as possible so everything is the right scale. It's basically a matter of picking out the blocks that best represent that building from a color palette and then we start the building process."

There's a lot of detail that goes into the project, from the placement of lampposts and shrubbery to the interior layout of buildings with framed photos and even the menu and employees at Boozel Dining Hall.

"It's definitely been a group effort and it's kind of cool to see the other people who are interested outside of the esports community," Schultz said. "Games like Minecraft are only increasing in popularity and it's nice to see people contributing to this project, expressing their creativity and providing an experience to engage with the campus."

Schultz said the project has been helpful on a personal level as well.

"It's one of those things where your college career gives you an all-encompassing experience," Schultz said. "I'm majoring in computing and philosophy and I'm interested in event planning so you never know when all the things you do might intertwine. The project has definitely been a great experience for me."

Schultz hopes to have the entire campus completed by the end of the spring semester. People who own the Minecraft Java Edition for Windows, Linux and macOS will be able to explore campus after following instructions explained in this YouTube video produced by the Esports Club. 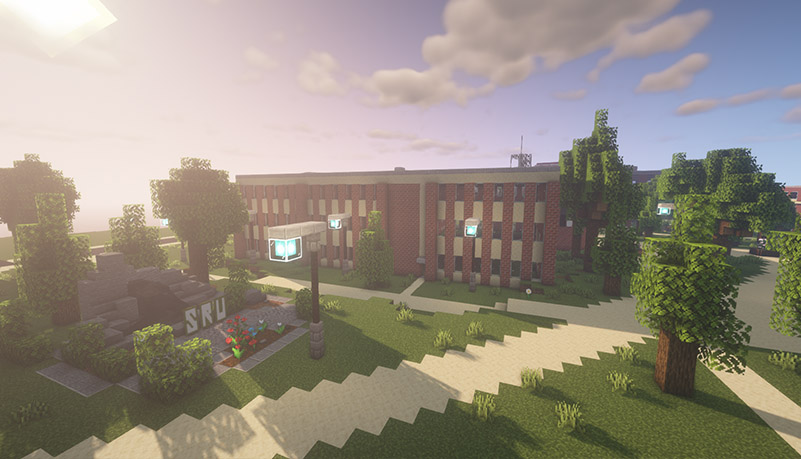 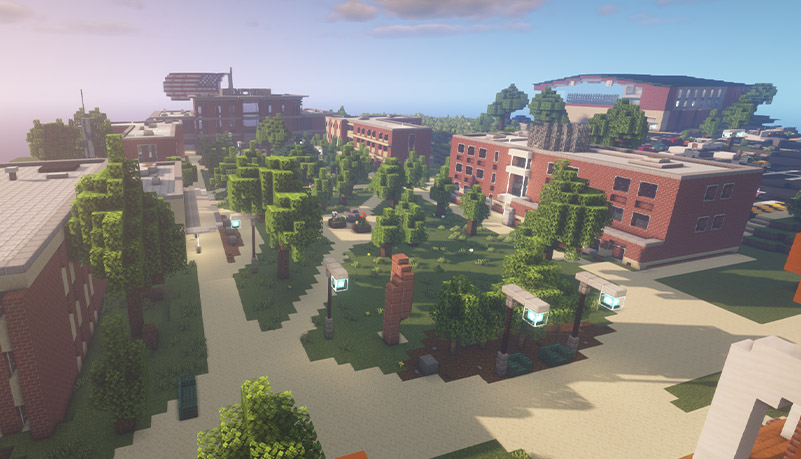