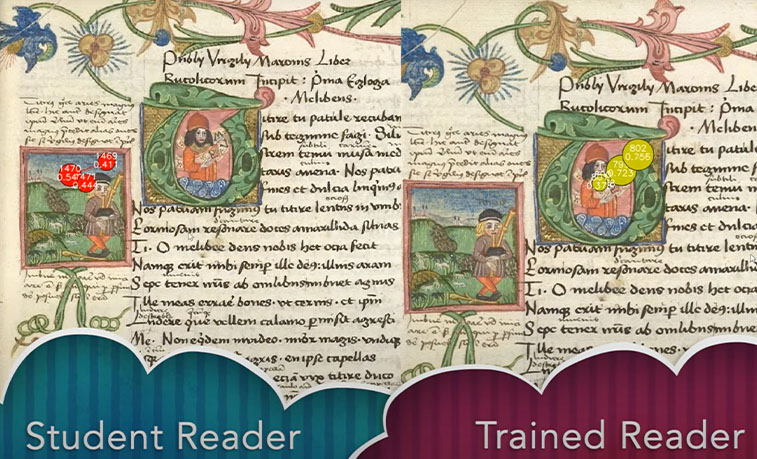 This page from Eclogues, a medieval illuminated manuscript written by Latin poet Virgil in 1473, was used in an eye-tracking study by Seth Lee, a Slippery Rock University instructor of English, that shows the different fixation points between a student reader, left, and those of a trained reader, right.

SLIPPERY ROCK, Pa. — The way people read and engage with text certainly has changed across the history of humanity, from deciphering ancient hieroglyphics drawn on cave walls to scrolling text messages and social media updates on a smartphone. But a Slippery Rock University professor with a background in medieval and early modern literature said there's one aspect that makes modern readers similar to their ancient or medieval counterparts.

"We may be more alike than we think," said Seth Lee, instructor of English, who also has a background as a digital humanist. "With the rise of the Internet, in particular, a lot of the text that we read now is multimodal. Text and image interplay with each other."

Modern examples of this interplay are people pointing to overlaid text on their TikTok videos. The lip-syncing of rap lyrics "nope" and "yep" is among the popular social media memes that combine images and words. But publishers have been using images with words long before Instagram, comic books, magazines or even the printing press. This includes medieval illuminated manuscripts, which were handmade books decorated with silver and gold leaf paint, as well as meticulously drawn illustrations embedded within or bordering the text.

The technique was used mostly between the fourth and 15th centuries for prayer, scriptures and other books with Christian themes, but they were also used for secular purposes too, including proclamations and poetry. 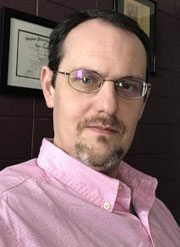 "These medieval illuminations served a whole bunch of purposes: they could be informative, instructive, decorative or even humorous, depending on who the illustrator was," Lee said. "Some of the illuminations are not unlike what we would think of as graphic novels today."

Lee said that in recent decades, people have become more reliant on text compared to images or even spoken words, because of text messaging, email and other digital communication. But images are still very much a visual supplement.

"Where we are distinctly different (compared to medieval readers) is the ways in which we consume media," Lee said. "But also, there is a significantly larger portion of the population who are literate and therefore able to read text and images together."

Expanding on Lee's research interest in medieval illuminated manuscripts, he has conducted multidisciplinary studies using eye-tracking technology to analyze how modern readers engage with medieval texts and how that could be applied to teaching practices.

"A lot of my students who are encountering these texts are, in some ways, a lot like the medieval readers in that a vast majority of the population can't read the language, whether it's Latin in Biblical texts or German or Spanish," Lee said. "We've found that they make meaning out of it by looking at the illuminations. That's how they gain insight, especially if they lack literacy in a particular language."

In 2019, when Lee was an English instructor at the University of Alabama in Huntsville, he and a communication arts professor there, Candice Lanius, conducted research using infrared eye-tracking software that determined readers' fixation points on a page. In their research, which was recently published in the journal, Medieval Perspectives, they found that students, when encountering an illuminated page with text or marginalia in an unknown language, were twice as likely to fixate on images than text.

Also, human figures and those within the large letter to start a paragraph, known as an "inhabited initial," were more likely to attract attention and revisits than non-human subjects and decorated initials. Human figures embedded within text are not unlike the videos created by TikTok users who dance and point to text in their videos.

Lee and Lanius also found noticeable differences between student readers and "trained readers." The trained readers, those are familiar with the manuscripts and understand the text, were more disciplined and quickly fixated on the initials and stayed there longer than students who more rapidly scanned the page to orient themselves.

"This shows that there is a process to reading; it's not a passive activity." Lee said. "The eye-tracking technologies show the act of reading and that there is much more going on physically and cognitively when approaching these texts."

According to Lee, medieval illuminated manuscripts are more intriguing to study than fleeting forms of modern communication, such as a TikTok videos or tweets, because of the language barriers he mentioned, but also because of the meaning.

"A lot of them have these religious aspects to them, so there's this encouragement to meditate on the image, the story, the lesson, or the figure and be more reflective; it's not just instructive," Lee said.

Lee said his interest has followed him from UAH to SRU, and he plans to incorporate digital humanities and emerging technologies such as eye-tracking in SRU's English Department, and as part of future interdisciplinary projects.

More information about SRU's English program is available on the department's webpage.