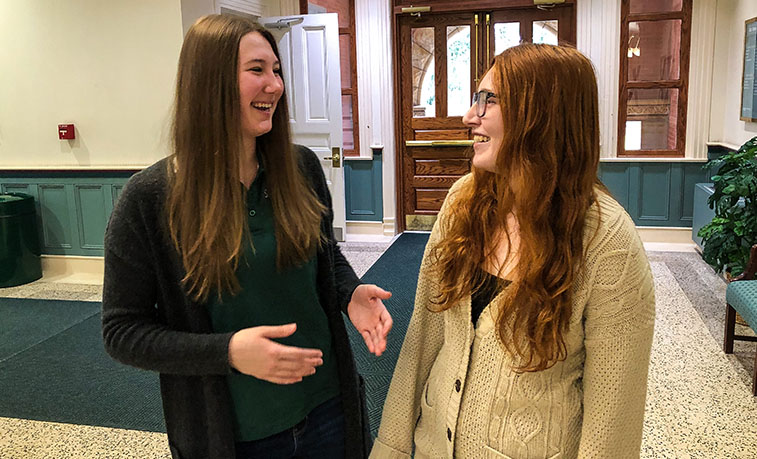 SLIPPERY ROCK, Pa. — What makes someone a great mentor? That's a timely question to ask given that January is National Mentoring Month, an annual campaign to promote youth mentoring in the United States. It was inaugurated in 2002, and is spearheaded by the Harvard School of Public Health, MENTOR, and the Corporation for National and Community Service

"A great mentor is someone who puts others before themselves," Carol Weber said. "It's someone who's looking out for a team, or the people around them, more than just their own successes and getting those others where they need to be (in life)."

Weber, a sophomore exercise science major from Harrisburg, enrolled in Slippery Rock University's Emerging Leadership Experience last year as a freshman and attended weekly meetings intended to empower first-year students through personal leadership development and co-curricular experiences. This year, as a member of the SRU women's basketball team, Weber is a peer mentor leading a group of 15-20 first-year student-athletes as part of the ELE program.

Julie Varnish, assistant director for leadership programs in SRU's Office of Student Engagement and Leadership, helps coordinate the ELE program, which consists of 20 peer mentors and nearly 130 mentees, made up of freshmen and first-semester transfer students. This academic year, the ELE program expanded to include two cohorts that are exclusively for student-athletes to accommodate their schedules and unique interests.

"We have wonderful faculty, staff and coaches on this campus who are amazing mentors but sometimes students are just more comfortable asking other students for advice because they are closer in age or they've gone through a similar experience," Varnish said. "Our students are able to relate to their fellow students in a way that others can't."

According to the Multi-Institutional Study of Leadership, and research conducted by John Dugan and Susan Komives, mentoring relationships are one of the strongest predictors in shaping college students' capacity for socially responsible leadership. Dugan and Komives found that the degree to which students report being mentored directly related to gains in their leadership capacity.

At each ELE meeting, peer mentors present one of 12 different student leadership competencies based on a leadership model developed by Corey Seemiller, author and professor of leadership studies in education and organizations at Wright State University. In each meeting, the group may conduct an activity and discussion based on a competency. For example, a favorite activity involves students working in small groups to build a replica helicopter using Lego pieces to match a completed model, only with rules and obstacles that forces the students to develop their communication competency.

"By working with the student leadership competencies, we're training our students how to build and articulate those skills that they learn inside and outside the classroom," Varnish said. "Skills that will lead to future success in their careers."

Originally known as the First Year Leader Scholar Program, the ELE program was rebranded by organizers to emphasize leadership as a personalized journey.

"Even if you are aren't the captain of your team, you can still have a leadership role and you can still be an inspiration to someone," said Weber, who is interested in pursuing physical therapy as a career. "I'm going to be working with people and I'll need to take advantage of a lot of the competencies that we're learning. I'll be putting into practice everything that I've learned in this program, whether it was a mentee or a mentor."

Weber also has experience mentoring youths, which is a hallmark of the National Mentoring Month campaign. During the summer months, Weber is an assistant coach for two different youth basketball teams in Harrisburg: a recreational league team at Brightbill Park consisting of fifth through seventh graders and an AAU team made up of high school juniors.

"The younger players really look up to who's coaching them," Weber said. "When I was in high school, they came to my games to see me play, so it's a really cool experience to be a coach for this group of kids that looked up to you and using basketball to help them learn different (life) skills. As a coach, I take it upon myself to make an impact by helping them build character."

Although athletes may be likeminded in wanting to win, they still come from different backgrounds. That is something Varnish acknowledged when answering the question, "What makes someone a great mentor?"

"Great mentors have a passion and a certain level of empathy to understand where people are coming from," Varnish said. "They need an open mind for helping people who are struggling in different ways. Even though Person A might have different life experiences than Person B, it's important to find a common ground. Students who want to make a difference in the lives of other students is a huge indicator of their own success and the success of others. I've had students tell me that if it weren't for mentor programs (like the ELE program), they would've quit or transferred."