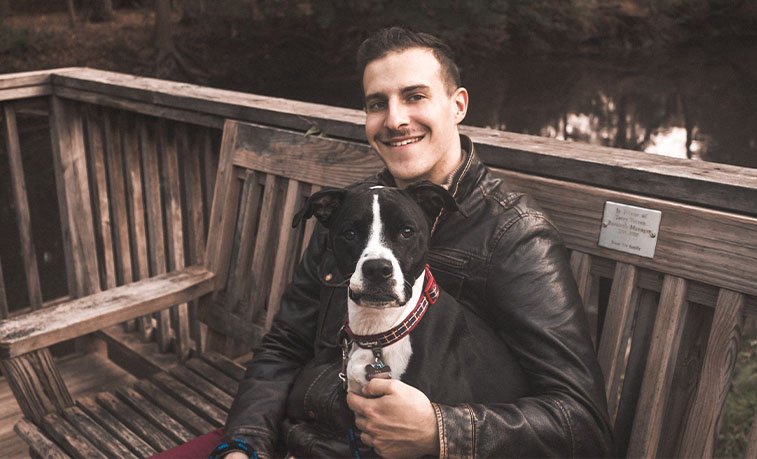 Slippery Rock University student Andrew Jones and his dog, Sky, are featured in the latest issue of Appalachia, a literature journal for which Jones wrote and submitted an essay about his experiences coping with the COVID-19 pandemic.

SLIPPERY ROCK, Pa. — The COVID-19 pandemic has affected people in different ways: feelings of grief, sickness, economic uncertainty, isolation and angst toward how other people are reacting to this global health crisis. Andrew Jones, a Slippery Rock University senior English writing major from Grove City, has felt them all. He wrote an essay about his experiences last spring and submitted it to a mountaineering and conservation journal, which recently published his work. Since then Jones' metaphorical journey over peaks and through valleys have persisted.

Jones' short story, titled "The Shaking Trees," is featured in the Winter/Spring 2021 issue of Appalachia. Although Jones was published by other literary journals that showcase submissions from undergraduates, this was the first time his byline appeared in a professional publication with a national following.

Published continuously since 1876, Appalachia is America's long-running journal about mountaineering and conservation. It's currently published twice a year by the Appalachian Mountain Club, whose 275,000 members support the protection, enjoyment and understanding of the outdoors.

Jones wrote about a phone conversation he had with his mother, Joan, while he was hiking in the woods near Grove City with his dog, Sky. On the hike, he observed the shaking trees "crashing into their neighbors like packed subway passengers," and how the lack of human contact during the pandemic made him take for granted the ability to touch a living thing, albeit the smooth bark of a Musclewood tree.

"The conversation I had with my mom was about the odd differences of our COVID-19 experiences between small-town America and New York, as well as our attempts at discussing a family member who got sick during the pandemic," Jones said. "There's an unspoken tension that rides through the conversation as each of us misunderstands what the other is experiencing, but the sickness of our family member draws us into a common worry."

Jones grew up on Long Island, New York, in the communities of Ronkonkoma and Holbrook, where his family still lives. His mother is a nurse and his sister, Katie, is a health care administrator. However, the impact of the pandemic goes further than having front-line workers in the family. Jones' grandmother, Helen Clemente, 93, died from COVID-19 last spring, and in his story her sickness was a conversation topic.

"Unless you have someone in your family who ends up getting (the virus) and has the more severe symptoms, it's very easy to believe that (COVID-19) is just a big city issue," Jones said. "The virus doesn't really care where you live or what your political affiliation is."

The running dialogue of Jones' story underscores the dichotomy between both city and country and mask-wearing and personal freedom, not just that of an independent college student and a concerned parent.

"Andrew is pretty raw in how he's coming to terms with what is happening and he's willing to put himself out in the world," said Mark O'Connor, SRU associate professor of English. "A lot of people might think that's being too personal. That's one of his strengths; he's willing to be super honest in his writing, and for a person of his age, that is admirable. And he's writing in a way that's beautiful, clever and smart enough to get published in a national literary magazine."

Jones wrote the article as an assignment in O'Connor's class last spring titled Literary Publications and Design. There was a creative writing component of the class, but also students learned the business side of getting published just like professional writers.

"I had the students write about this weird moment in American history and what it's like just to be 'you,'" O'Connor said. "And Andrew, he's writing what he's living and putting this real-world experience, including his pain, on the page."

Jones' reflections in the essay were from the onset of the pandemic, but his life continued to be affected months later beyond what was depicted in the story. Among them, his grandmother's death and wake that was conducted virtually, as well as better times, like making a surprise trip back home to Long Island to see Joan on Mother's Day when New York's COVID cases were on the decline.

Jones eventually contracted COVID-19 in November with mild symptoms, losing his sense of taste for a day and developing a cough. Even though he's since recovered, he sometimes experiences shortness of breath. He was also affected financially, having his hours as a server at a restaurant in Grove City reduced -- a job in which he had to occasionally confront customers who refused to wear a mask.

"There's a lot of common sense (safety precautions) that a lot of people are just ignoring," Jones said. "It's hard to not take it personally. Sometimes you just want to grab people by the shoulders and say, 'Do you not understand?'"

Still, Jones' writing, as well as reading his classmates' essays, was a comforting outlet for him.

"It's just interesting to see how we are all handling the pandemic," Jones said. "Some people wouldn't even notice and not much has changed for them, and some people's whole lives were upended. Some people might've been sick and then they're back working the next day, and I was out of work and figuring out unemployment and all this other stuff."

It's as curious to Jones as how some trees shake in the wind and some barely move.