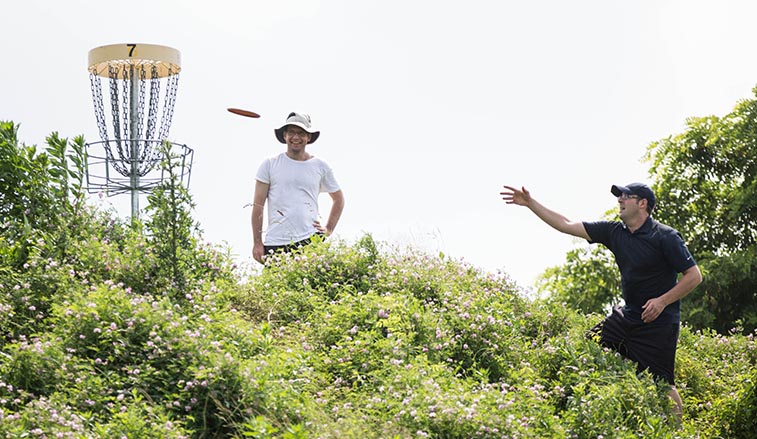 The Frisbee, which was first produced in 1957 by the Wham-O toy company, has spawned sports such as disc golf and Ultimate Frisbee which are played at Slippery Rock University.

SLIPPERY ROCK, Pa. - An idyllic image of college life often includes images of students sitting cross-legged underneath a large canopied tree reading their textbooks, cheering on sports teams or tossing a Frisbee back and forth. At Slippery Rock University, those activities are commonplace. What many people might be surprised to learn is that the idea for the Frisbee was inspired by college students in Connecticut, who in the mid-1900s began throwing empty pie tins made by the nearby Frisbie Pie Company to one another.

Inspired by this recreational activity of tossing pie tins, Walter Frederick Morrison and his partner Warren Franscioni invented a plastic version of the flying disc that traveled farther. Morrison later sold the model to the Wham-O toy company, which changed the spelling of the disc so it was different from that of the pie company, and began producing Frisbees on Jan. 23, 1957.

"It makes sense that (the Frisbee) was created by college students because in college you can be at a cookout or at a party or just hanging out in the quad, and it's an easy thing to throw around and pass the time with," said Matt Lobaugh, SRU assistant director for recreational sports.

Frisbee, and iterations that spawned sports like disc golf and Ultimate Frisbee, is part of the culture at SRU. The University hosted the Professional Disc Golf Association world championships in 2015 on a course that snakes through campus and is still used as the site of a PDGA-sanctioned tournament each May. Ultimate Frisbee, once an intramural sport at SRU, is beginning to take flight once again with the creation of a club team last year.

"Frisbee is starting to pick back up around here," Lobaugh said. "It's looked at more as a recreational activity than a sport, but it's a lot of fun and you see them around campus all the time. If you really enjoy it, you can take it to the next level of a sport."

That's exactly what a group of SRU students did in the fall 2017, creating an Ultimate Frisbee club team to play clubs from other colleges. "Ultimate," as it is known, is a non-contact sport, similar to football or rugby where teams of seven advance toward end zones by passing a Frisbee. The sport was created in 1968, but has gained popularity in the late 20th century. An estimated 5 million people play Ultimate in the U.S. today.

"It thrives in a college setting because it's a sport that you can make as competitive as you want it to be," said Matt Rechenberg, a sophomore environmental geoscience major from Gibsonia. "Even the teams that are not as good still have fun with it. And you don't have to have a scholarship or a background in the sport to take it up."

Rechenberg played Ultimate before coming to SRU and when he arrived, he and his roommate, Luke Pedersen, a junior computing major from Gibsonia, and Will Davis, a senior mathematics major from Pittsburgh, formed the Ultimate Frisbee Club Team at SRU.

The club had 10 members last spring but in the fall 2018 semester the team grew to 24 members and even hosted a tournament at SRU with the help of an organization called Pittsburgh Ultimate. Teams from large schools like the University of Pittsburgh, Penn State University, the University of Michigan and the University of Delaware participated. Although SRU finished last among the 12 teams, Rechenberg was encouraged by the growth of, and interest in, the team in just one year.

The club team at SRU practices two or three times per week and played in four tournaments last fall with plans for more in the spring. Each spring, USA Ultimate hosts championships for its College Division, which was created in 1984 and now includes more than 800 college teams and 18,000 student-athletes, making it the organization's largest member segment.

"We're a new, young team," said Rechenberg, president of the club team, which is made up of mostly freshmen and sophomores. "It's going to continue to grow because a lot of people want to play a sport in college and it's just a fun activity."

Although there is not an Ultimate Frisbee intramural league offered through Campus Recreation, an intramural tournament is planned for April 14. Lobaugh said there wasn't enough interest last year but with the growth of the club team, he's optimistic about hosting a tournament this year.

For more information on intramural sports at SRU, visit www.imleagues.com/sru or call 724.738.4800.