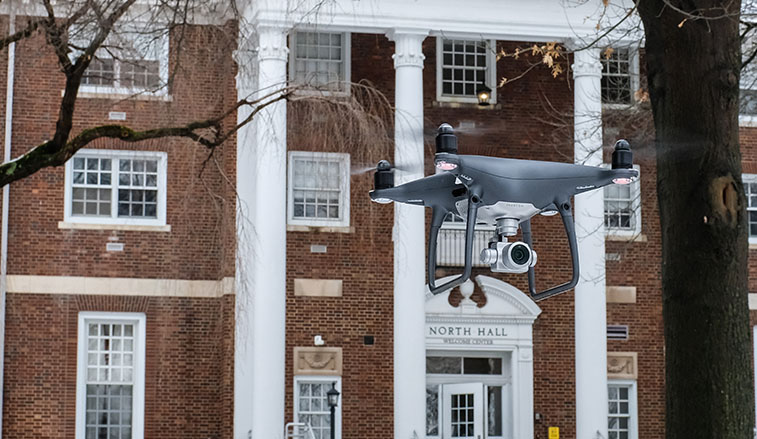 Unmanned aircraft systems, more popularly known as drones, are used to capture aerial images. Flying a drone on or over Slippery Rock University requires prior authorization, including proof of a license and insurance.

SLIPPERY ROCK, Pa. - Note to folks who received drones or other unmanned flying objects as holiday gifts: before you can use them on, or over Slippery Rock University, you must apply for permission to do so.

"Because drones are so popular now, people sometimes forget that as a drone operator you are technically a pilot," said Mike Schnelle, SRU digital design director and a Certified Remote Pilot who uses drones to capture images and video for the University Communication and Public Affairs Office. "Like manned aircraft, you must know the rules of the air, understand the dangers and be licensed to pilot your aircraft."

SRU's drone policy, established in 2012, was developed to ensure the University remains in compliance with applicable laws and regulations and to protect the health and safety of people and property within its borders.

In 2016, the Federal Aviation Administration adopted rules for drone use. Among them, non-hobbyists operating drones must take a test to become Certified Remote Pilots and earn a license through the FAA, called Part 107. Many states, including Pennsylvania, have also adopted laws for recreational fliers related to privacy and appropriate drone use. However, the FAA requires all drone operators, including recreational fliers, to register their drones weighing between 0.55 and 55 pounds, keep them below an altitude of 400 feet and avoid restricted areas near airports and areas temporarily determined by the FAA for crowded events like football games. 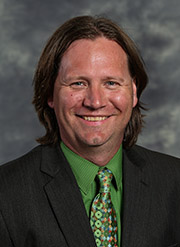 Certified Remote Pilots, including commercial fliers, must take a test and earn a license through the FAA, called Part 107. To comply with SRU's drone policy, fliers must first have a Part 107 license and a certificate of insurance, then submit an authorization form five days prior to a mission explaining the purpose of the operation and other details of the flight plan. A drone flight cannot occur on University property without authorization from UCPA. Violators of the policy, which applies to students, faculty, staff and visitors, are subject to criminal prosecution and fines.

"Our main concern is people's safety," Schnelle said. "There are many dynamics to operating a drone to ensure the safety of people on the ground and to protect the surrounding area. There are also privacy issues involved."

Schnelle said that applications are assessed based on need, but people are encouraged to take advantage of existing drone footage that's available for viewing and download on the University's official photo gallery and digital archive Zenfolio, which houses visual assets produced by UCPA. The site is available via link from the University's homepage.

To submit a request for authorization to conduct a drone flight or to view the University's drone policy, click here.