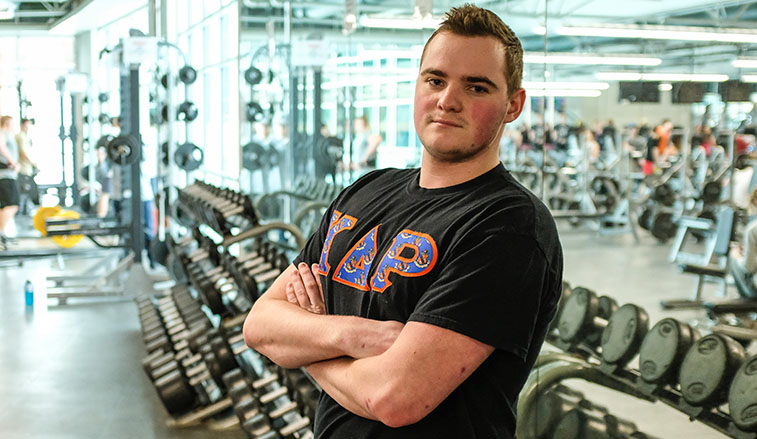 Ryan McClaren, a Slippery Rock University student who survived a near-fatal car accident in May 2018, found support and strength from a variety of resources at SRU after returning to class, including his time at the Aebersold Student Recreation Center.

SLIPPERY ROCK, Pa. - When Ryan McClaren was pulled out of the passenger side of an inverted Nissan 370Z on a back road near Kent, Ohio, last May, he was unconscious and covered in gasoline with multiple injuries that included a lacerated spleen. Lucky to survive, McClaren would have his medical charts pulled up by countless health care professionals in the following weeks, so it would seem far-fetched in the following months for his name to appear on class rosters at Slippery Rock University, let alone the deans' list. Making the deans' list would instead require a push by McClaren, one that he would not have been able to make if not for the support of family, friends, medical professionals and the University.

"It was pretty scary," said McClaren, a sophomore safety management major from Copley, Ohio, about the May 13, 2018, car accident and four-week hospital stay that included four days in the intensive care unit. "I didn't know what was going to happen. I didn't know how these injuries were going to affect me or if they were going to be permanent."

McClaren suffered from second-degree burns from the gasoline, internal bleeding from a lacerated spleen, a partially collapsed lung and injuries to his shoulder, hip and ankle. But the most lasting effect, one that concerned doctors the most about his return to college in the fall, was from a concussion which caused short-term memory loss.

McClaren had the support of his friends and family, which included his father, Gavin; mother, Nora; his brother and sister; and girlfriend, Yekaterina Grega, a sophomore SRU exploratory major from Factoryville, who drove six hours to join many others to be at his bedside after the accident. Even after weeks of physical therapy for a displaced hip joint, the transition back to life as a residential college student would be difficult.

"Your best support group is your family and your friends, people you can talk to and confide in," McClaren said. "I was nervous about coming back and leaving that. But as soon as I got back (to SRU), all my fraternity brothers, my girlfriend and everyone was really supportive."

McClaren, a member of the Kappa Delta Rho fraternity at SRU, also found support through SRU's Office of Disability Services, after submitting documents and scheduling an appointment with Kim Coffaro, the office's assistant director.

"When I met with him you could tell that nothing was going to hold him back, but he knew he needed help and coming to our office was definitely the right thing to do," said Coffaro, who helped set up accommodations for McClaren's needs, like extended time or a quiet place for him to take exams, as well as help note taking from ODS student volunteers.

"A lot of people, when they think of this office, think of someone who uses a wheelchair or someone who has visible disabilities, but a lot of other students you can't see their struggles or the challenges they face," said Coffaro, who said that a majority of the nearly 700 students the ODS serves have diagnosed emotional and psychological afflictions, like attention deficit/hyperactivity disorder. "The accommodations really do make a difference."

"Kim was very helpful, and I got all the accommodations I needed," McClaren said. "They made sure I had everything covered."

McClaren also benefitted from having a place to work out. While he was released from care from his outpatient physical therapist, he continued doing exercises at SRU's Aebersold Student Recreation Center five days a week, usually right after class but sometimes late at night, until the ARC closed.

"It's been great," said McClaren, who returned to playing intramural football and basketball after a full recovery. "I worked out before but not nearly as much. It helped me recover and just made me feel better."

However, his greatest effort was directed at making last fall's deans' list by earning a semester grade-point average of at least 3.5.

"I was so happy to make the deans' list," McClaren said. "I didn't know if I was going to be able to do that, but I studied more than I ever had. It was difficult with my memory issues to study and go to class; I had to work extremely hard."

McClaren, who after graduation wants to work in safety management for the oil or construction industries, hadn't considered if making the deans' list was because of the car accident rather than in spite of it, but he agreed that he has been more focused to overcome his adversity. He doesn't ask why or dwell on circumstance, either.

"I just didn't want to let the accident affect me negatively, mentally or physically," he added. "That's why I studied hard and went to the gym."