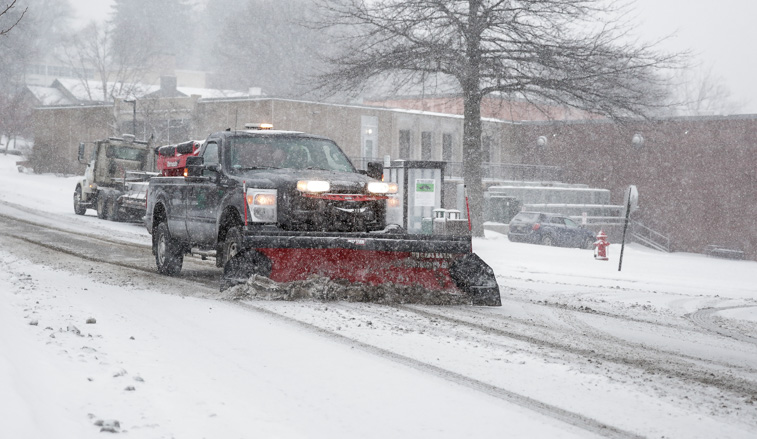 Eleven plow operators and nine shovelers from the Slippery Rock University grounds crew clear snow and ice from the campus’ five miles of roadways, 13 miles of sidewalks, 40 acres of parking lots and 1,135 steps.

SLIPPERY ROCK, Pa. - During winter, Edward Grossman's sleep schedule is that of an expectant father. As the grounds staff supervisor at Slippery Rock University, Grossman is the person who makes the first call in the middle of the night to begin the unenviable task of removing ice and snow in order to keep students, faculty and staff safe and the University running smoothly. 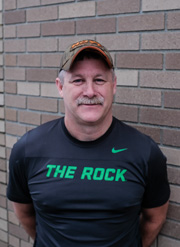 Rather than responding when a would-be mother goes into labor, Grossman makes the call to bring in the labor, as in a staff of 11 vehicle operators and nine hand shovelers to clear and treat SRU's five miles of two-lane roadways, 13 miles of sidewalks, 40 acres of parking lots and 1,135 steps.

"If there's a chance of snow, I'm always around," said Grossman, who lives seven minutes from campus and goes to sleep at 7 p.m. before potential snowy days, and wakes up every two hours to check the weather conditions.

If there is such thing as a typical snow day, Grossman arrives between 3 and 4 a.m. to clear the maintenance parking lot before his staff arrives to begin their assigned routes around campus, which is 5 a.m. for operators of trucks and tractors with plows and salt spreaders and 6 a.m. for shovelers. If the snow is severe enough, they'll arrive earlier.

"Any type of snow that sticks to the ground, we're in here at that time," said Grossman, who has been on the grounds crew for 25 years, including the last three as supervisor. "More than three inches of snow and people are bumped up an hour. I also get calls throughout the night (from University Police) when students are here if we need to come in."

Grossman and his supervisor, Dallas Cott, SRU's assistant director of campus services, watch the weather closely during the winter months to anticipate snowfall and schedule staff ahead of time. However, when snow is persistent, the grounds crew must work around the clock to clear the snow, unlike the Pennsylvania Department of Transportation, which deploys its plow trucks in shifts. 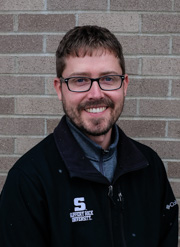 "A lot of people don't realize that we only have one crew," said Cott, whose staff arrives from their hometowns as far away as Franklin, Cranberry and Mercer. "Here, it's the same guys whether it's the morning, afternoon, evening or late at night. Sometimes these guys are here 20-some hours. At some point we have to send them home to get some sleep so they are safe operating equipment, while still safe for the people (to drive and walk) on campus."

The fleet of maintenance vehicles with plows and salt spreaders includes: two dump trucks and three pickup trucks (one added in each of the last three years) for the roads; and six tractors and utility vehicles for the sidewalks. Each of the plow operators has an assigned route which begin with areas that have priority access, such as outside the Student Health Center, or outside buildings that open earlier than others, such as the Aebersold Student Recreation Center.

"Everyone takes a lot of pride in the snow removal process," said Cott, who added that custodians also get in on the act, helping to clear building walkways, and University mechanics are relied on to keep all the vehicles running in full force. "They want to do a good job and get done as early as possible so things are clear before people arrive and make sure no one gets hurt on campus."

Cott acknowledges that it is impossible to have every area of campus continuously cleared, especially when it snows throughout the day and when there is freezing rain. The grounds crew treats roadways with rock salt, but it takes longer to melt ice when temperatures dip below 20 degrees, which is why a blended mixture of sodium chloride, magnesium chloride, potassium chloride and a corrosion inhibitor is treated on sidewalks in sub-20-degree temperatures.

"Freezing rain is the worst, by far, with what we have to deal with," Cott said. "We'll salt it, it'll melt, but then the temperatures are cold enough that it refreezes almost instantly and it's a continuous cycle."

The University uses about 400 tons of rock salt each winter, with at least 100 tons stocked in the loading bays beginning in late October.

The threat of snow means that the grounds crew has roving start times that deviate from the normal 8 a.m. to 4 p.m. shift. If overnight snowfall is a dusting to three inches, the removal and treatment process takes about four hours, but more accumulation and textures of snow requires more time.

"It changes our daily plans significantly because that same crew does a bunch of other things, but snow removal always comes first," said Cott, listing other tasks that could be delayed, such as trash pick-up and delivering materials, or cause earlier snow removal times, such as setting up for events.

For someone who keeps a close eye on the campus, Grossman noticed that the intensity of snowfall is surpassed only by the amount of activities and events. While he is in the process of beginning a new day, for some, the previous one has yet to end.

"There are a lot of activities; the campus is always busy, especially the last five years or so," Grossman said. "There are always people walking around campus, even late at night. (The students) are up all night; I'll see some at 3 o'clock in the morning."