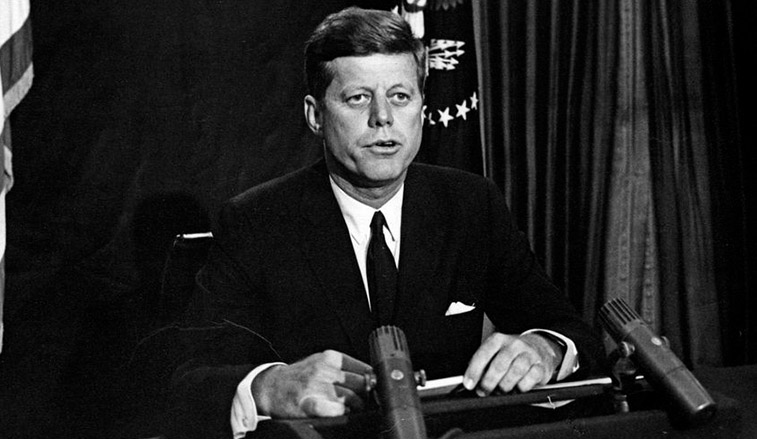 Slippery Rock University students in the History of Broadcasting course this semester will study a variety of topics include the first live televised news conference by a U.S. president, which occurred 58 years ago today, Jan. 25, 1961.

SLIPPERY ROCK, Pa. --The first live televised news conference conducted by a U.S. President is a topic broadcasting and history buffs enjoy discussing. Fortunately for Slippery Rock University students enrolled in the History of Broadcasting course, they'll get a chance to study and discuss former President John F. Kennedy's groundbreaking television appearance, which occurred on this day, Jan. 25, in 1961.

Although Kennedy's predecessor, Dwight Eisenhower, had previously recorded news conferences for broadcast at a later time, Kennedy was the first U.S. president to do something that even 58 years later is a rare occurrence despite the proliferation of media outlets and a 24-hour news cycles.

"Going into his presidency, Kennedy decided to use television as a way of communicating directly with the people in a way that hadn't been done before," said Mark Zeltner, SRU associate professor of communication, who is teaching the 400-level History of Broadcasting course to about 25 students this semester. "Kennedy was essentially the first 'television president.' He had been very successful on television during his campaign with his famous debates with Richard Nixon in 1960. The general consensus was that Nixon won the debate in terms of content but in terms of perception Kennedy won because he looked good and healthy and Nixon was sweating and looked a little shifty."

In his first live televised news conference as president, Kennedy read a prepared statement from a podium in the State Department auditorium, addressing the famine in the Congo, the release of two Americans from Russian custody and the impending negotiations for an atomic test ban treaty. He then took 32 questions from the media in an unscripted session about a variety of issues, including Cuba, voting rights and food aid for impoverished Americans.

"It showed a shift in politics in a president's relationship with the media," said Zeltner, who was a child during Kennedy's years in office but who can still vividly recall watching the former president on television and how entertaining he was. "He engaged with the media and people wanted to watch him. What he said was important but not nearly as important as the perception that he gave as this youthful, active president."

With the number of outlets available to them today, many presidents have used other methods beyond television to communicate to the public. Trump often uses Twitter and will answer questions from pool reporters who follow the president's movements and share information with the rest of the press corps. Obama preferred answering questions with one interviewer, vetted through reporters' queries, with 269 such one-on-one sessions in his first two years, according to the White House Historical Association.

"Presidents don't like (the live, solo unscripted news conferences) because they don't have the control," Zeltner said. "The contention between the media and the president is not new or unusual. It happens in every administration. It just depends on how presidents can manipulate that connection. People liked Kennedy because he was good with the media and he took advantage of the good perception he had on camera and he sort of molded his relationship with the public through the media."

Whether a president tweets or has a one-on-one interview with a reporter, those situations are dramatically different from a formal news conference setting when the larger and broader press corps may ask questions.

"The media always want an opportunity where they can ask questions and have a direct answer without any kind of filter," Zeltner said. "For a president to go live and have people ask questions that they are not prepared for is not as attractive. They all want to put out a certain message, but if they don't participate with the back and forth with the media, then (the media and the public) are left making our own perceptions."

According to Zeltner, the reason SRU students, particularly those studying communication, are so intrigued by the topic is how the filtered message and the reliance on visual presentation impact the interpretation of the message.

"They realize the importance of that communication," Zeltner said. "From a media standpoint, anything that is visual has a greater connection to an audience compared to what's written. When people can see something, they have a different perception than when they read it. Kennedy and his administration was the first to realize that and take advantage of it."