From The Rolling Stones to Slippery Rock: acclaimed trombonist to visit SRU 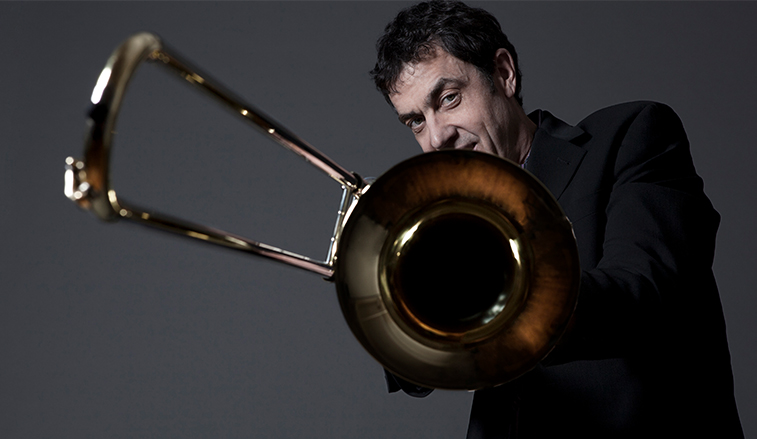 Michael Davis, a former trombone player for artists including Frank Sinatra and The Rolling Stones, will conduct a workshop and lecture for Slippery Rock University jazz students, Feb. 1, after performing at the Grammy Awards earlier in the week.

SLIPPERY ROCK, Pa. - Four days after performing at the 2018 Grammy Awards, Michael Davis will be at Slippery Rock University to work with jazz students. The former trombonist for Frank Sinatra and The Rolling Stones, Davis doesn't mind squeezing in a visit to western Pennsylvania, even with a schedule that includes recording sessions for the upcoming movie "The Incredibles 2" and performing for the Broadway musical "SpongeBob SquarePants."

"It's always a good experience coming to Slippery Rock," said Davis, who previously stopped at SRU in 2014 as a jazz ensemble guest soloist and to talk to jazz students under the direction of Jason Kush, associate professor of music. "It's great working with Jason, and his students are terrific, so when the invitation came again it didn't take me long to say 'yes.'"

Davis, a veteran of 35 years in the music industry, will conduct a workshop and lecture at 3:30 p.m., Feb. 1 in Swope Music Hall, where he will offer performance and professional advice. Altogether, he will spend three days in Slippery Rock where he will direct a high school honors jazz ensemble that has rehearsals on Feb. 2-3 in advance of the Pennsylvania Music Educators Association's District Jazz Concert at 2 p.m., Feb. 3 at Swope Music Hall. SRU has hosted the concert for high school honors musicians from Butler, Lawrence and Beaver counties for more than 20 years.

"We're always trying to get the highest professionals that we have contacts with to come here to talk with students," said Kush, who knows Davis through mutual acquaintances in the music world, some of which stem from the University of Miami where Kush earned his doctoral degree and Davis has served as a guest lecturer. "Not only (do we seek) professionals who play well and are experts in their field, but those who can connect with students and put their thoughts into words very well, are personable and open to questions and are generally good people. Mike's the best in every category."

Aside from offering pointers about techniques for brass players and entrepreneurship in the music industry, Davis said he plans to echo a lot of Kush's direction while also adding his unique perspective.

"When you have an educator and a musician with the stature that Jason has, it's pretty easy because you come in and the band is already in really good shape," said Davis, who visits with approximately a dozen college groups each year. "I'll just add my perspective, which will be a combination of elements from good ensemble playing, to stepping out as a soloist and the expectations there, and then all the way to what it's like to be a professional musician."

Davis likely will be asked what it was like to tour with the legendary Rolling Stones, with whom he toured five times from 1994-2007, flying in a private jet with a traveling party of 35 and staying in lavish hotels.

"It was a career-changing opportunity and I'm very grateful for it; I got to see the world five times over," Davis said. "They are good guys to work for. It was awesome and so much fun. They were more corporate than they were back in the early days ... all the craziness and stuff had ended by that time and they were much more tame, which is good. There still was a little bit of craziness."

Davis, who went from working with Frank Sinatra to The Stones after a successful audition in advance of the bands' Voodoo Lounge Tour, said that pacing of the tour was very comfortable because lead singer Mick Jagger couldn't perform back-to-back shows and guitarist Keith Richards had an accident that provided a hiatus.

"(Touring with the Stones) afforded me some creative music projects that I would not have been able to do financially," said Davis, who later founded a music publishing company, Hip-Bone Music Inc., and produced his own signature trombone. "Something of that magnitude, you meet a lot of people. It was a well-run machine."

Touring with Jagger and company was a departure from Davis' first years on the road with drummer Buddy Rich, when they would drive all night after a gig to get to the next town to perform on consecutive nights.

In addition to running Hip-Bone, Davis is involved with projects that include everything from movie scores to Broadway musicals. Based in New York, Davis didn't have to go far to perform for the Jan. 28 Grammy Awards at Madison Square Garden, where he was part of a horns section for a Broadway musical segment.

Yet despite the private jets, rubbing elbows with rock 'n' roll elite and posh accommodations on the road, Davis finds opportunities like the one at SRU very satisfying, both in working with students and as a performer.

"In jazz, the horns have an opportunity to step to the forefront," Davis said. "That's a reason why I love it because you can really showcase your ability. More than that, you have an opportunity to influence the music and contribute to how the music is flowing and its quality. As opposed to working with The Rolling Stones, you're just kind of an additional flavor when the horns come out. It's clearly not a band that's focused on the horns."

Don't be surprised, however, if Davis will need a breather after sliding a trombone all the way from the Grammys to Slippery Rock in one week.

"There's a physicality to it that's not in any other instrument," said Davis, before describing the air-generating demands of creating the right sound and how other musicians like pianists or guitarists can take time off and not lose as much endurance. "When you're a trombone player, you take a week off there's a good possibility that you're not going to get a sound out of your instrument that is recognizable to what it normally sounds like.

"There are some days when I want to quit because the physicality of it is so ridiculous. Other days it feels like all your work is paying off. I've grown to love the challenge."