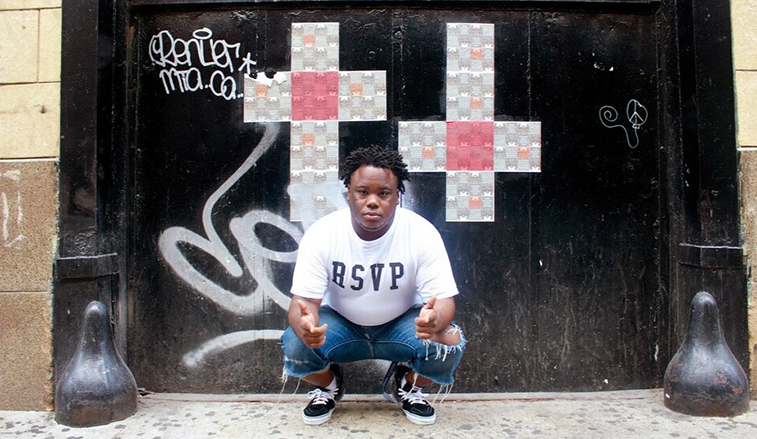 Multidisciplinary artist Corey Carrington, a 2011 Slippery Rock University graduate, received a $10,000 Advancing Black Arts in Pittsburgh grant that he will use to produce “Watermelanin,” his debut spoken-word album, set for release this fall.

SLIPPERY ROCK, Pa. - Since graduating from Slippery Rock University, Corey Carrington could be identified many ways.

He's been everything from a dishwasher to a telemarketer to his current roles as a coordinator for an after-school program and a substitute teacher. As an artist, he's written poetry, created digital collages, curated exhibits and, using the pseudonym Grits Capone, performed the spoken word at open mic nights.

Now he can add grant-winning artist to his resume.

The 2011 graduate with a bachelor's degree in communications received two grants last year, including a $10,000 award through the Advancing Black Arts in Pittsburgh program, a partnership of The Pittsburgh Foundation and The Heinz Endowments to help black artists and cultural organizations that contribute to the black arts community and to eliminate racial disparities within the larger arts sector; and a $900 grant from the Greater Pittsburgh Arts Council.

"I never gave up on my dream of being an artist," said Carrington, surprised at the realization that it's been nearly seven years since he graduated from SRU. "It's been a slow climb, but I'm glad that it's taken as long as it has because I appreciate where I am right now and what I've been able to do."

Carrington is using the ABA grant to produce a spoken-word album titled "Watermelanin," a project he refers to as "edutainment" in that it will educate listeners about African-American history and culture and address current social issues, while also providing entertainment with instrumentals and explorations of music from across the African diaspora, from tribal drumming to blues, jazz, funk and hip-hop.

"It bridges that gap between stereotypical black culture and Afrocentricity," said Carrington, who has been developing the idea for the last few years. "It's mixing (the negative stereotypes and positive aspects) to make people aware of intersectionality in black people, meaning that there's not one way to be black."

Carrington, who received the GPAC grant to learn about African drumming and storytelling, is reaping the benefits of his persistence and experiences as an artist.

"(The grants) mean a lot; I got over a big hump because as I kept writing grants and getting denied, I started to question myself as to whether I could really do this," said Carrington, who began writing poetry at the age of 13. "Just to get this grant was a confirmation that I was going in the right direction and believing in myself all these years was worth it and finally paying off."

Carrington has taken advantage of other opportunities as well. He was the first person selected for the Society for Contemporary Craft's Emerging Black Arts Leaders Apprenticeship, a yearlong apprenticeship at the Pittsburgh nonprofit organization where he gained a variety of experiences working in arts administration, namely as an exhibit curator. After his apprenticeship concluded in August, Carrington curated his first exhibit, "Electric Kool-Aid," Oct. 5 to Nov. 26 at the Brew House Association in Pittsburgh.

The exhibit featured 31 art pieces, submitted by local artists and ranging from abstract to conceptual that Carrington considered "an examination of Afro-Surrealism and Afro-Futurism through artwork."

His portfolio continues to expand thanks to an ambition he cultivated at SRU, when he joined the Alpha Zeta Alpha chapter of the Phi Beta Sigma fraternity and became active with student organizations, including serving as treasurer of the Black Action Society.

"Being able to utilize my talents on campus in different groups and organizations has prepared me to be a multidisciplinary artist and a creative entrepreneur because it gave me the vehicles early on to be creative," Carrington said. "A lot of the things that I have done post-college I've already had those experiences in college. The organizations, the brotherhoods and the friendships that you make enable you to realize what your dreams and aspirations are and to believe in whatever it is that you want to do."

Carrington's dreams are big, whether it's curating an art exhibit at the Louvre in Paris or becoming a New York Times' best-selling author, he aspires to continue creating art, in his native Pittsburgh or connecting to national and international art communities. "I want to take it as far as I can go," he said.

For now, his focus is on "Watermelanin," expected to be released in the fall, with an estimated 15-20 tracks and 60 combined minutes of content. He's recording the album in Mr. Smalls Recording Studio in Millvale. A release party at the MOKA Art Gallery in Pittsburgh is in the works. Despite still being in the research stage, Carrington will soon be using the grant to collaborate with other musicians and producers and to promote the album.

Carrington said that the voice of Grits Capone will be used on a few tracks. Capone is his on-stage persona that he developed has empowered him to use colloquial language and delve into social commentary on issues such as police brutality, gentrification, racism, education and masculinity, to name a few.

"It's a specific angle that I'm going for (on the album) but the influences that I've had over the past couple of years, everything that I've been through artistically, has prepared me for this album," Carrington said. "I have separate things that I do, but it's all one expression of me."