SRU students travel from ridges to the reef during Belize trip 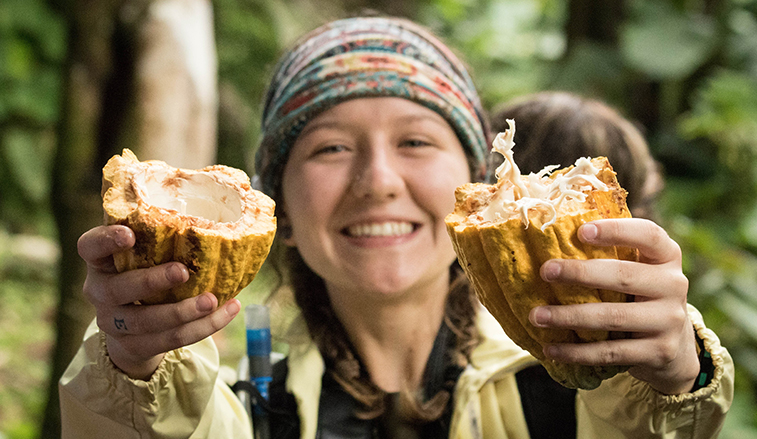 Natalie Erwin, a junior park and resource management major from Ambridge, was one of 12 Slippery Rock University students to go on a faculty-led trip to Belize. Students were able to pick their own cacao seeds and made their own chocolate.

SLIPPERY ROCK, Pa. - College students are accustomed to getting their food, medicine and makeup at the store, but for a group of students from Slippery Rock University, they learned there's another place to go, albeit not nearly as convenient: the jungle.

In the Central American country of Belize, a native tour guide named Geraldine showed the students how the red pods from the Achiote tree can be used as lipstick and how termites can be a lip-smacking snack.

"None of us believed her so she just walked over and poked a hole in the nest and had a termite on her finger and ate one," said Nicole Govan, a senior park and resource management major from Butler, who eventually gave in and tried more than one. "They taste just like carrots with a minty aftertaste."

Govan was one of 12 students from SRU's parks, conservation and recreational therapy department who took part in a faculty-led trip to Belize, Jan. 3-14. The goal of the trip, according to Becky Thomas, assistant professor of parks, conservation and recreational therapy, was to identify the connections between environmental health and human health.

"In order to have healthy people, we need to have a healthy environment; those two things are closely connected with one another," Thomas said. "The students were so supportive of the conservation efforts and they embraced the opportunity to step outside their comfort zones. They have such a good attitude and want to experience new things."

The experience went far beyond eating termites. Thomas, who previously co-led a conservation project in Belize while completing her doctoral degree at Colorado State University in 2015, organized the SRU trip with a "ridges-to-reef" approach. SRU students learned how farming practices in and around the rainforest affect the water that is washed offshore into the Mesoamerican Barrier Reef System, the second largest reef in the world and home to 65 species of stony coral, 350 species of mollusk and more than 500 species of fish, not to mention a source of ecotourism for Belize.

As a nod to ecotourism, the opportunity to go snorkeling is what attracted Govan to sign up for the trip. But she then learned how important ecosystem health, wildlife health and human health are interconnected, as well as the Belizean ideal of conservationism.

"Nothing is wasted there," said Govan, noting how the cohune trees produce palms that are used for roofing and oil that is used to heal wounds. "They use every part of the plant when they farm, from the roots to the leaves. You can tell the people really appreciate the environment. They need to take care of the environment because they need it for their health."

The connections between the environment and human health also appealed to Tara Belloma, a senior recreational therapy major from Pittsburgh, who was particularly interested in the plants that were used for medicinal purposes by the Q'eqchi' Mayan communities in Belize, such as the resin from the Copal Tree that is used to treat headaches and stress through aromatherapy.

"The natural approach to therapy is cool because that's what recreational therapy is," Belloma said. "We're trying to do the non-pharmacological approach as well."

How the plants are grown is also important. While visiting with a 26-year-old cacao farmer named Daniel, the students learned about agroforestry, where crops are grown on the forest bed as a way to preserve the watershed, rather than segmented in fields through slash-and-burn agriculture techniques. Rainwater is absorbed in the forest, rather than washing soil - along with pesticides and fertilizers - into the watershed and out to the reef.

The students picked their own cacao plants, dried out the beanlike seeds from which cocoa is made, crushed them and put the powder into a molding to make their own chocolate.

Other experiences included direct service opportunities, such as creating cilantro seed planters for a senior community in Punta Gorda and helping refurbish facilities at the Ya'axché Conservation Trust Field Station, where the SRU visitors stayed in bunkhouses.

"It was a great pleasure working with such a great group of students," said Brenda Kolling, business manager of EcoTourism Belize, Ya'axché's business venture, which facilitated the tour. "Students were able to tie their respective disciplines into each of the areas and activities they did through volunteering to help elders, community clean-up, helping to complete projects such as painting bird towers and helping in a nursery, all while learning how the environment and human nature coexist and complement each other."

Traveling from Southern Belize, the group visited the Community Baboon Sanctuary, learning about the habitat for the Black Howler Monkey and other wildlife, before completing their ridges to reef journey by staying at Joe Jo's by the Reef, a resort of cabins parallel to the Mesoamerican Barrier Reef on Tobacco Caye that is accessible only by boat.

In addition to Thomas, Deborah Hutchins, assistant professor of parks, conservation and recreational therapy, went on the trip, as did Kristin Black, a graduate student majoring in environmental education from Strasburg, Virginia. Black is an online student who works for the Smithsonian Conservation Biology Institute in Front Royal, Virginia.

According to Thomas, being immersed in the Belizean culture also added to the students' learning and is something they can apply in their studies.

"The cultural conservation is just as important as biological conservation," Thomas said. "Having a diverse community with diverse perspectives can lead us to new insights in how we interact with our environment."

"Opportunities for SRU students to travel abroad enhance their learning so they can develop different viewpoints and use them to address local, regional, global and cultural issues," said Brad Wilson, SRU's associate provost for transformational experiences. "Based on these experiences, they're able to achieve one of our University's student learning outcomes, which is developing a worldview that acknowledges diversity and global interdependence."

Although eating termites is not one of SRU's learning outcomes, the experience was likely something that the students will never forget.