SRU students adapt on the fly for trip to Saint Lucia 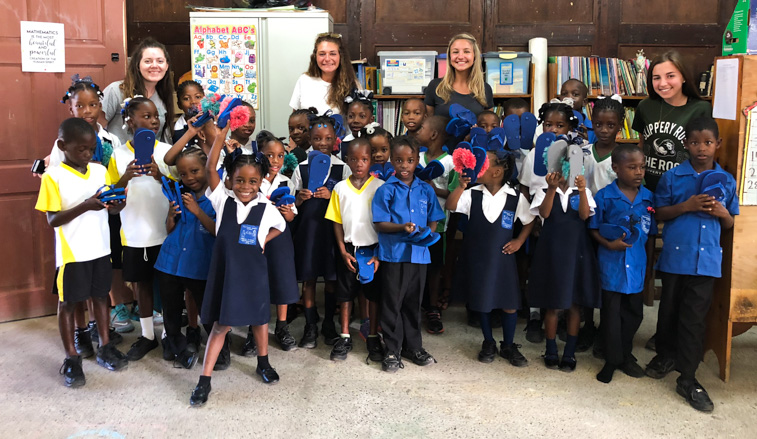 Back row from left, Slippery Rock University students Juliana Gabany, Miriah Mascetta, Karissa Lambert and Julia Aloisi give flip-flops to children at the Soufrière Infant School in Saint Lucia, where the SRU students worked with teachers and students as part of an alternative break.

SLIPPERY ROCK, Pa. - In more ways than one, a group of Slippery Rock University students traveling abroad had to quickly adapt for their Jan. 5-16 faculty-led alternative winter break program. Within weeks of their planned departure to serve at an African orphanage, the four students had a change of course, and instead found themselves assisting professionals and school children on a Caribbean island.

Last year, Alice Del Vecchio, assistant professor of interdisciplinary programs and coordinator of SRU's nonprofit leadership program, took a separate group of students to Hekima Place, a home for orphaned girls in Kiserian, Kenya. Del Vecchio planned to lead a new group on a return trip, but canceled the journey in early December because of concerns by the organizing agency due to political unrest in Kenya and a resulting travel advisory.

Instead, Del Vecchio contacted a group in Soufrière, Saint Lucia, where she led previous student trips and workshops from 2008-11, and arrangements were made for an "alternate" alternative break. The group, which included Del Vecchio and her husband, Russ, still were able to make a difference in the world, just a different part of it than anticipated.

"As upset as we were about not going to Kenya, people benefitted from this just as much," said Miriah Mascetta, a senior early childhood education major from New Castle. "Everyone (in Soufrière) was so happy and so thankful for us coming."

The quartet of students -- Mascetta; Julia Aloisi, a junior communication major from Monaca; Juliana Gabany, a senior dual major in recreational therapy and professional studies from Irwin; and Karissa Lambert, a senior early childhood and special education major from Beaver -- conducted workshops with special education teachers in Soufrière, interacted with students from several schools and assisted Del Vecchio with her professional development workshops.

Del Vecchio partnered with the Soufrière Regional Development Foundation to conduct six workshops for 50 adults working for nonprofit organizations in Soufrière. Chester Alexander, a former SRDF leader who is still connected with the organization, helped the SRU group find lodging on short notice, as well as other accommodations for the trip.

"The nonprofit sector is where real life happens," said Del Vecchio, who previously worked with the SRDF to conduct youth leadership conferences. "It's not just Americans who do this. The nonprofit sector has a home everywhere. It's exciting to go someplace else and watch my students see that they have something to offer and to watch them develop like these young women did; that's why we teach."

Even Aloisi, a communication major who is not an aspiring teacher, taught a lesson about dental health education at eight different schools in Soufrière.

"The thing that I learned is you don't have to be an educator to educate," said Aloisi, whose mother works in dentistry. "Going into the schools, I was able to educate them with my knowledge. That was rewarding."

Gabany, Lambert and Mascetta conducted workshops for teachers at the Soufrière Special Education School, sharing the teaching strategies they learned as SRU students, including reading comprehension, responsive classrooms, safe spaces, one-on-one teaching and how to build a community, some of which the teachers implemented immediately.

Additionally, all four SRU students interacted with children at the special education school, the infant school and the primary school. They read the book "The Snowy Day" by Ezra Jack to kindergartners who have never seen snow, and they gave each of the nearly 300 children they visited a pair of flip-flops, which were donated by the Student Nonprofit Alliance, SRU's student-run nonprofit organization.

"It wasn't just direct service," said Mascetta, who is student-teaching in the West Middlesex School District and helped exchange letters from students in Pennsylvania to students in Saint Lucia, and vice versa. "I just feel like walking out of that school, I did something; I made a difference."

"They went into a foreign country, with a different culture, and they adapted so quickly; it was amazing," said Russ Del Vecchio, who nicknamed the four students the "Rock Warrior Princesses." "There was no culture shock at all. They took the knowledge that they have from the classroom and did something extremely important with it."

"Opportunities for SRU students to travel abroad enhance their learning so they can develop different viewpoints and use them to address local, regional, global and cultural issues," said Brad Wilson, SRU's associate provost for transformational experiences. "Based on these experiences, they're able to achieve one of our University's student learning outcomes, which is developing a worldview that acknowledges diversity and global interdependence."

Their faith in humanity was restored after seeing how happy and appreciative the Saint Lucian children were. Marveling at how a nine-year-old girl told a seven-year-old classmate that losing her toy was not important because that's not food or family, Lambert said with a laugh, "You should come back to the U.S. and tell that to some adults."

"I never valued my education as much as I do now," said Gabany. "(Although) they have amazing teachers there, I'm more appreciative to have this opportunity to graduate and start a career. The world is a lot better than we think it is. We all speak the same language of love and laughter and being human."