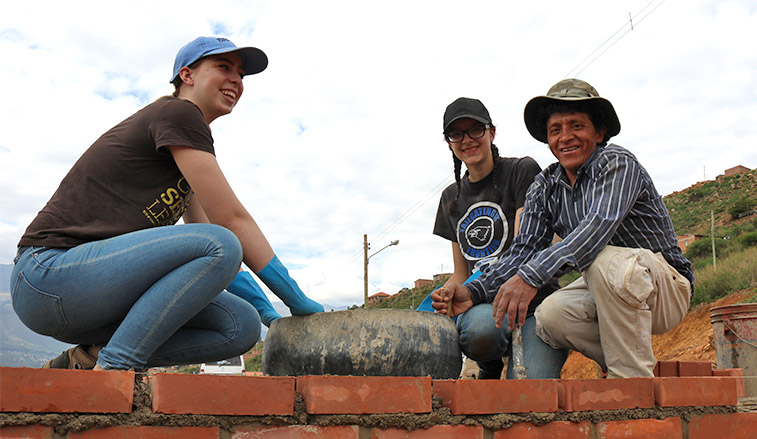 SLIPPERY ROCK, Pa. - A new model for global service-learning at Slippery Rock University is being built brick by brick, much the like the Caramarca Otavi Community School that is being constructed in Bolivia.

With Bolivia as the setting, serving-learning as the strategy and civic leadership as the goal, SRU launched a new program called Learning to Serve when a group of 13 people, including 10 students, traveled to Cochabamba, Bolivia, Jan. 3-18. The program includes typical service-learning components, such as student reflection and learning about the people benefiting from the direct service, but this program goes deeper by including ongoing civic engagement.

"All we did was shift the container and the students filled it up and in many ways overflowed that container; that's gratifying to see," said Jeffrey Rathlef, SRU director of community-engaged learning, who accompanied the students on the trip. "Our experiences should not be ends unto themselves. They should be catalysts for something beyond, where students become better citizens in their own communities and pursue causes they care about."

Unlike many trips, as the students prepared for this trip they did not have an agenda with direct service opportunities mapped out. That was eventually determined by their partner, Amizade, a nonprofit organization based in Pittsburgh that facilitates international service-learning experiences. Amizade (pronounced AH-mee-zah-jee and which means "friendship" in Portuguese) applies the practice of fair-trade learning, where host communities have a voice and are offered more just, equitable and sustainable benefits and opportunities.

As a whole, the group received $1,000 from the SRU Office of Community-Engaged Learning and the SRU Foundation, Inc., to apply to either a local, regional or global cause based on what they learned on the trip.

Upon arrival in Bolivia, the group was placed with host families, two students per homestay, and met with community members, professionals and local representatives from non-government organizations. Then they worked at three service sites near Cochabamba: helping develop an arboretum in Tiquipaya; a bird sanctuary in Quillacollo; and taking part in three, seven-hour workdays helping build the Caramarca Otavi Community School in Vinto.

Led by three SRU students who served as experiential learning facilitators, or ELFs, the students also met as a group in four pre-departure sessions and nine on-the-ground sessions once in country to discuss subjects like cultural humility, group dynamics and fair-trade learning practices.

"The connection between the local people and the group made it a success," said Sam Hauser, a senior developmental psychology major from Slippery Rock, who served as an ELF. "In other service trips you don't always have to communicate just to complete the service. Immersing yourself into the culture made it successful because we got to know the community and we cared about the bird sanctuary and the school being built."

At the end of their time working on the school, which included laying bricks and pouring concrete for the columns to build the second floor, the local developers and project masons feted the SRU students with handfuls of confetti on their heads and presented them with a gift of appreciation.

"My biggest takeaway was learning that you don't serve to a community but you serve with a community while doing service," said Allison Klemm, a senior early childhood and special education major from Charleston, West Virginia, who served as an ELF. "Going forward, when participating in service projects, the focus shouldn't be about the service itself but getting to know the people who you are doing the service with."

The group decided to invest the $1,000 back into Amizade as part of a matching grant with the community in Bolivia, so that any assets contributed by the community members, such as a bag of cement, would be doubled because of the grant.

Sara Noel, Amizade assistant director, received the check at a reentry dinner at SRU last month, expressing her appreciation for the work of the students.

"We have to fight to get groups to have anywhere near the experience as (this group had)," Noel said. "The work that they were doing, the understanding of these (fair-trade learning) principles and why they are going is really exciting for us to see (them) do such an amazing job."

Brad Wilson, SRU's associate provost for transformational experiences, also traveled to Bolivia as part of the Learning to Serve program.

"I joined this program because I wanted to see firsthand how our service-learning programs are making an impact in the students' lives and in the lives of others," Wilson said. "I've done a lot of work with students but I've never done anything like this. It was a wonderful experience and it was an honor and privilege to be part of this group."

SRU plans to continue its partnership with Amizade under the OCEL's Learning to Serve program by returning to Bolivia and expanding to other Amizade service locations, including Puerto Rico.