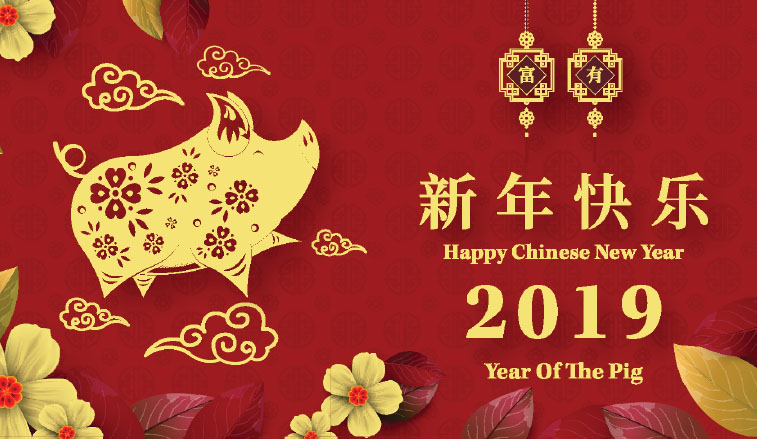 SLIPPERY ROCK, Pa. - Slippery Rock University will join millions across the globe in celebration of the Chinese New Year from 10:30 a.m. to 2 p.m., Feb. 9 for an event at the Slippery Rock Township Municipal Building.

Chinese New Year, a more than 4,000-year-old tradition that observes the start of the new lunar year, is also known as the "Spring Festival" in modern Mainland China and is celebrated at the turn of the traditional lunisolar Chinese calendar. This year it occurred Feb. 5.

The holiday is centuries old and gains significance because of several myths and customs. Traditionally, the festival was a time to honor deities as well as ancestors. It also serves as a time to reconnect with family and friends, enjoy traditional games, music and food, launch fireworks and take a break from work and responsibility.

2019 is the Year of the Pig in China. The Pig is the 12th of the zodiac animals and according to one Chinese myth, the Jade Emperor said the order of the animals would be decided by the order in which they arrived at his party. Pig was late because he overslept, while another story says that a wolf destroyed his house, forcing Pig to rebuild his home before he could set off for the party. When he arrived, he was the last one and could only take 12th place. In Chinese culture, pigs are the symbol of wealth. Their chubby faces and big ears are signs of fortune as well.

"The Chinese New Year is the grand holiday for our people to come together and celebrate our heritage and culture," said Yi Li, SRU assistant professor of economics.

Li, who is leading SRU's celebratory efforts in conjunction with other Chinese faculty members, hopes that the ceremony will give a little taste of home to those international students who are of Chinese origin, while encouraging other students and community members to take part in the experience.

"The celebration isn't just for Chinese people. Since Korea and Vietnam also celebrate the lunar new year, and as an event of this type provides a chance for American students to learn about other cultures, we invite everyone to joint us."

This is the 11th year that the University has hosted a celebration.

The free event will include a buffet-style Chinese lunch, interactive children's games, goody bags, trivia and traditional performances and songs.