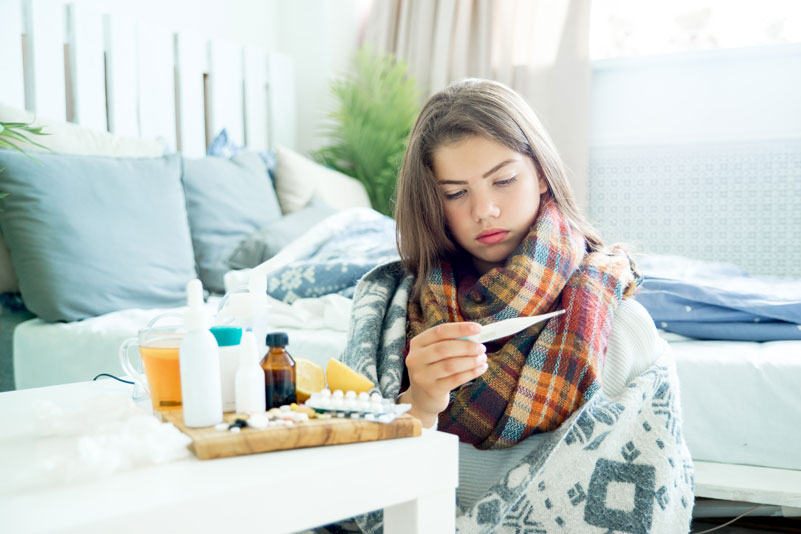 Health officials at Slippery Rock University are urging students to get vaccinated for the flu after the Pennsylvania Department of Health declared flu activity across the state “widespread.”

SLIPPERY ROCK, Pa. -- Reports of spreading viruses, diagnosed cases and even deaths as a result of the coronavirus outbreak that began in China have dominated the news. However, when it comes to viruses, health officials at Slippery Rock University warn the community there's a more serious threat with which they need to be concerned: influenza, also known as the flu.

"In Pennsylvania, you're much more likely to contract influenza than any other harmful virus that is circulating around the world," said Kris Benkeser, director of SRU Student Health Services. "If you look at the odds of getting sick, this is what you need to be paying attention to."

Since October, there have been nearly 60,000 diagnosed cases of the flu and 40 deaths in Pennsylvania alone, according to a report from the Pennsylvania Department of Health. The PADOH has classified flu activity as "widespread" for the current surveillance season, which lasts until May. Statewide flu cases and flu-associated hospitalizations have increased 24% and 20%, respectively from last year. At SRU the cases have been relatively consistent compared to previous flu seasons. SHS has treated 14 students with the flu this academic year.

"Influenza infection among our students is pretty stable this year; we're not seeing a spike," Benkeser said. "Part of the reason is that the University was on semester break during the worst part of flu season. However, there's probably a greater threat now because of how widespread the flu activity this year (is across the state). We haven't seen the end of the flu just yet and it's a concern for college students because of communal living."

Another reason why flu cases are not as severe at SRU compared to the rest of the state are the proactive measures taken by students, faculty and staff. SHS administered its entire supply of 600 student flu vaccinations before the end of the fall semester. The supply was based on previous years supplies and surveys of students who indicated that they received their flu shot elsewhere. SHS is currently referring students that still need flu shots to local pharmacies at Giant Eagle and Rite Aid, where they can get vaccinated for free with current health insurance coverage.

"Our students have become more savvy about the need to get a flu shot," Benkeser said. "And they're much better at following preventative measures like hand-washing than they perhaps were in the past."

Getting a flu vaccine is the first step for preventing the flu. Still, that doesn't mean you won't get sick. According to the Mayo Clinic, various studies of the flu vaccine show that it is about 50-60% effective for healthy adults between ages 18-64.

"It still is the best thing to do to protect yourself," Benkeser said. "I always say, 'If someone told us that we had a 60% chance of winning the lottery, we'd all be standing in line for a ticket.' Also, if everybody in your community received the flu shot, then very few people would actually contract the flu and be able to spread it around, so the effectiveness increases."

Benkeser also said that many people mistake the flu for the common cold. The flu is a respiratory illness that effects about 8% of the U.S. population each year. Symptoms can include a fever of 102 degrees or higher, persistent coughing, a sore throat, sinus and ear pressure, chest or stomach pain, difficulty breathing and extreme fatigue.

"When you have the flu, you are laid out, you become dehydrated and you feel like you've been run over," Benkeser said. "It's horrible. It's not like having a cold. Some people stay contagious up to seven days, but you're the most contagious for the three or four days after your symptoms start."

Benkeser recommends drinking plenty of fluids; 64 ounces of water per day is the standard, but a drink with glucose, such as Gatorade, Sprite or any other clear liquid, can be helpful as well. Benkeser also said that people with flu symptoms should self-isolate until they are without a fever for at least 24 hours. For college students, that means avoiding the dining hall or gym and not attending classes.

While students may be reluctant to miss class and get behind in their work, their health and the health of the entire campus should be the primary concern.

David Wilmes, chief student affairs officer, advises students to notify their professors prior to class if they are going to be absent due to illness; check D2L, the University's online learning management system for assignments; contact a classmate to find out what they missed; and let the professor know in-person once they are healthy enough to return to class.

"If a student comes down with the flu or a serious cold, it is much better for them to rest than to overdo it," Wilmes said. "It is better to miss one class than to push yourself and end up being out the whole week. Professors are people too. They understand that students occasionally get ill and may end up missing class."

Thermometers and other self-care supplies such as Sudafed and cough lozenges are available at the SHC without seeing a nurse, but students can be evaluated 24/7, including transportation to a local hospital, if needed. Students should let a friend know if they are sick, and if conditions worsen, contact SHS at 724.738.2052.