SRU students give new therapeutic robot a ‘seal’ of approval 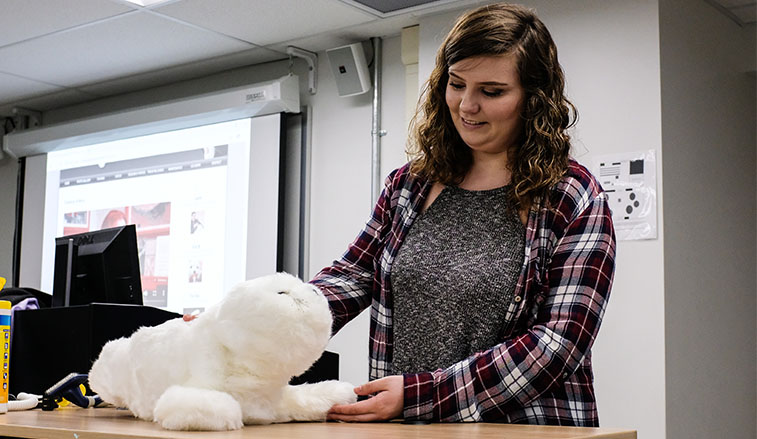 Cara Buccini, a Slippery Rock University senior studying animal-assisted interventions, interacts with a new therapeutic robot made to look like a baby harp seal that is used as an alternative to live animals.

SLIPPERY ROCK, Pa. - When animal-assisted intervention students at Slippery Rock University were told there would be a surprise in a class last week, they figured a professional therapist would be bringing in a four-legged assistant. After all, it's common to see a real-life Lab -- that is, a Labrador retriever -- in the recreational therapy lab.

Instead, students were introduced to a therapeutic robot made to resemble a baby harp seal and interact with patients as an alternative to animal therapy.

"I loved it; it was great!" said Cara Buccini, a senior business major from Grove City who is minoring in animal-assisted interventions. "I didn't know if they were bringing in a puppy or what, but seeing something new like this is really cool. I didn't even know that they had these."

The therapeutic robot was developed by PARO Robots Inc. and has been used in Japan and Europe since 2003, but is relatively new to rehabilitation centers, nursing homes and elder care facilities in the U.S.

"We see its application with dementia patients as a good alternative, because there could be some concerns with patients having uncertain, impulsive reactions to live animals," said Deborah Hutchins, SRU associate professor of parks, conservation and recreational therapy, who teaches the 300-level class, Animal-Assisted Therapy for Diverse Settings and Populations. "(The robotic seal) senses touch and responds to sensory input and voices. People get the same response from a dog ..."

"... But without the wet kisses," chimed in Yvonne Eaton-Stull, assistant professor of social work, who will use the PARO robot in her Animal-Assisted Intervention class. "This is an alternative, especially for people with allergies. Both classes are teaching it to use as therapy for people dealing with anxiety and other diagnoses."

Eaton-Stull's class analyzes the physical, cognitive and social effects of the human-animal bond as it relates to interventions in the human services and health care fields, while Hutchins' class designs and demonstrates programs and treatment plans to facilitate outcomes and practical application.

"We want our students to be familiar using (the therapeutic robot) so if they encounter it being used in the field they already have experience," Hutchins said.

As proponents of live animal interventions, Hutchins and Eaton-Stull have even entertained the idea of conducting a study with patients to compare the effects of live animals versus those of the robots. However, they consider the PARO robot only as an alternative for patients with allergies or fear of live animals.

According to PARO, some of the hospitals and nursing homes in Japan still don't allow animals, even though research supports benefits of animal-assisted therapy. PARO designed the robot to look like a baby harp seal because it is an unfamiliar animal and patients more easily accept the robot without any preconceptions or negative memories associated with other animals.

The PARO is covered in antibiotic fur over a hard inner skeleton that is operated by dual processors. A software program initiates the behavior and voice recognition systems, some of which is triggered by touch from lifelike whiskers on the robot. Even the battery charger, inserted into the seal's mouth through a pacifier, is made to limit the appearance of a mechanical device.

Hutchins and Eaton-Stull, who secured funding for the purchase of the robot from the College of Health, Environment and Science, have asked students in their classes to submit potential names for the robotic seal. For now it just goes by the company-provided name, PARO.