SRU gets the ball rolling for area bocce teams 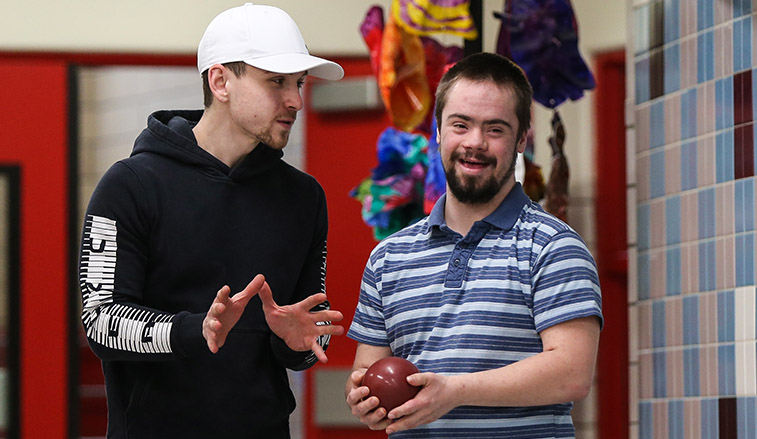 "Seeing how he had fun with it, I wanted to find some way to join in," said Humes, whose brother, Tristan, played bocce at Slippery Rock Area High School last year. "I wanted to see how it is to work with these great individuals. It's been a blast for me. I've been enjoying it a lot."

The SRAHS bocce team is comprised of athletes with and without intellectual disabilities, including Humes' brother, who is on the autism spectrum. The younger Humes has since graduated from SRAHS and benefiting from his bocce experience through improved fitness and social skills according to his older brother.

A popular backyard game played at picnics and barbeques, bocce is not considered a typical high school sport, but that doesn't mean the athletes are treated that way.

"High school students are at the matches and cheering them on," Mike Humes said. "You'd have an atmosphere like you would have at a high school football or basketball game."

With SRU supplying equipment and student coaches, the SRAHS bocce program is now in its third year. The University's Physical and Health Education Department has helped established 10 bocce teams at high schools in Butler, Lawrence and Mercer counties through a partnership with Special Olympics Pennsylvania and funding from its Interscholastic Unified Sports program. Eleven graduate students in the adapted physical activity program and seven undergraduate health and physical education majors serve as coaches.

"We're trying to put everyone on an equal playing field and make a sports team that accommodates people of all abilities," said Wendy Fagan, SRU instructor of physical and health education, who was approached by administrators at Sharpsville Area High School more than three years ago to find a way to reciprocate the support that their special needs students gave to their classmates on varsity sports teams. "The next thing you know we had four teams. It just took off."

Bocce as an interscholastic unified sport, meaning it is played by disabled and non-disabled athletes on teams that compete against other schools, already exists in Pennsylvania, but mostly in more densely populated areas like Pittsburgh and Philadelphia. The matches are played in gymnasiums with rules similar to the outdoor version of the game, only with a few adaptations. The 60-feet-by-12-feet court is made from PVC pipe and the balls are rubber with a squishy texture so they roll to a stop on the hardwood floors.

"I was the first to admit that I was not a bocce believer," said Fagan, who specializes in adapted physical activity programs and runs a sports camp at SRU for the visually impaired. "I had to eat my words. It's a great equalizing sport."

The challenge is getting school districts to believe as well.

"This is a commitment. (The high schools) are adding a sport to the list of ones they already offer," Fagan said. "We're asking them to buy into a whole mindset of inclusive sports. It's a change of culture for some of the schools. They have pep rallies and bands playing for them and kids go to see them and they have their lockers decorated for them. It's what you would expect from other high school sports."

Fagan hopes the 10 high schools will eventually run their teams independently and SRU can move on to help create teams at even more schools. Teams practice twice a week and compete in about three matches per year against other schools.

"It was our favorite program when we were graduate students and the reason we continue to help is because the effect it has had in the schools," Stringfellow said. "It's absolutely amazing. It's changed the way other students think and their perspective of students with disabilities."

"It gives our students a chance to get hands-on, practicum experience, not only working with students with disabilities but also in a typical activity setting," Breed said. "They are getting into a school and it's making our program visible but also providing access to such a wide population."

Anthony Pisano, a sophomore health and physical education major from New Castle, spent six years in the U.S. Air Force before enrolling at SRU so he could eventually work with disabled veterans, but he has taken a liking to the bocce program as a volunteer coach at SRAHS.

"I just like helping people; I like bocce and I thought I'd give it a shot," said Pisano, who attended Shenango High School in New Castle. "They didn't have (bocce) at Shenango and I don't know if I would've wanted to get involved back then, but I sure do want to do it now; it's fun."

SRU will host a regional tournament at 4 p.m., March 1 in Morrow Field House. Admission is free. All 10 area teams will compete with the winning team advancing to the state tournament in Hershey.

Humes and Pisano have been working on strategy as SRAHS practices for the regional tournament, such as Humes getting an athlete named Dalton to throw a ball away from the target ball, called the pallino, once his team already has a ball closer than his opponent.

"They've been working together and they want to improve," Humes said. "It's been a really good experience of collaboration and communication and setting a goal for each other. But no one really gets upset if they lose a match; they just have fun with it."