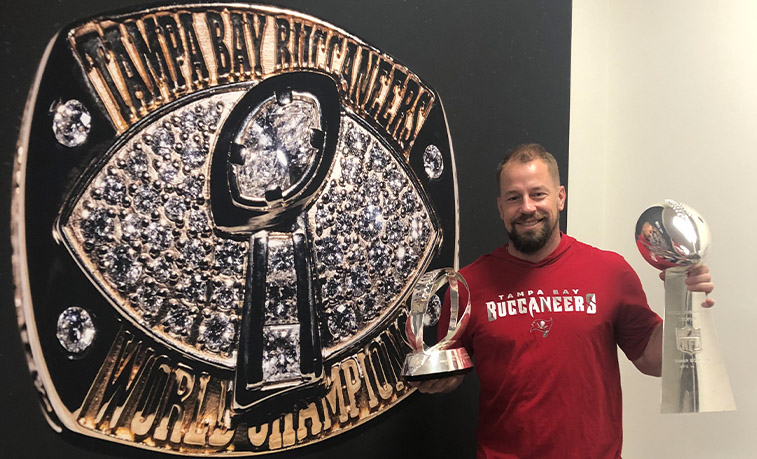 Tim Jarocki, a 2004 Slippery Rock University graduate with a master’s degree in sport management, holds the Vince Lombardi trophy after the Tampa Bay Buccaneers won  Super Bowl LV.  Jarocki is is the  Buccaneers’ director of  team  operations  just  completed his 16th season with the team.

SLIPPERY ROCK, Pa. — When the Tampa Bay Buccaneers became the first NFL team to win a Super Bowl in its home stadium, Feb. 7, there were Slippery Rock University alumni working for the team and savoring the victory from different vantage points. Three SRU alumni are employed by the Buccaneers in the ticketing, video and football operations departments.

"It's surreal," said Jarocki, who completed his 16th season with the team. "We had win, after win, after win and they were all exciting. Every individual within the organization had their own role and we all helped each other. It was just so thrilling the whole way through and even now a lot of us are saying, 'Wow, I can't believe we just won the Super Bowl.'" 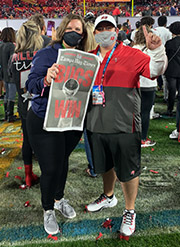 From, left Allie and Levi
Lewis celebrate on the
field after Tampa Bay’s
Super Bowl victory.

Jarocki handles logistics for the team, mostly the travel arrangements to get everyone and everything to and from the stadium, from the equipment truck for road games to hotel reservations and flight scheduling for team personnel throughout the year. The 2020 season was particularly challenging to account for COVID-19 safety protocols that included things like doubling the amount of charter buses so players and staff could adhere to physical distancing guidelines.

Allie Lewis encountered new challenges as well, as the stadium capacity was reduced and season ticket holders had the option to have their plans refunded or to choose a limited number of games to attend during the season. She previously worked with group tickets sales for military and first responders but transitioned to working directly with season ticket holders and managing accounts in 2020.

"This was my sixth season and during my time we had a season with a 2-14 record and we've gone through a lot of adversity," Allie Lewis said. "To finally have the team achieve this, after all of these years, is just very rewarding."

During Super Bowl Sunday, Allie Lewis was a liaison on behalf of Buccaneers and the NFL, assisting the Kansas City Chiefs front office personnel with parking coordination and escorting team owners to their suites.

Levi Lewis, meanwhile, was perched atop the scoreboard filming the game for the team from the end zone view. Levi Lewis is responsible for capturing and editing video of all the Buccaneers' practices and games, providing "cut-ups" to help coaches and players with the game-planning. For example, coaches can call up on their computers plays from certain game situations or angles using the video software that Levi Lewis operates.

Although Allie Lewis was hired full-time a few months before her husband six years ago, Levi Lewis was the first to work for the organization. He interned with the Buccaneers when he was an SRU student, filming summer training camps.

"We've put together a really good team in the time between me being an intern and then coming on full-time and now being in my sixth season," Levi Lewis said. "We've always had a really good core group of guys, and we were just a player or two away. (Quarterback and Super Bowl MVP) Tom Brady brought in that winning mentality and an overall belief that all the guys (on the roster) were good and we could get this done."

"On behalf of the University, we congratulate Tim, Allie and Levi for being part of the 2021 Super Bowl," said Brian Crow, professor of sport management and department chair. "We are excited and proud to have these alumni representing SRU while working for the Tampa Bay Buccaneers. While there are dozens of SRU sport management alumni working for NFL teams, this one was special to be able to have alumni be part of a team that won the championship in its own stadium."

Information about SRU's sport management program is available on the department's webpage.

(Editor's note: An extended version of this article will be published in the June 2021 issue of The ROCK Magazine.)