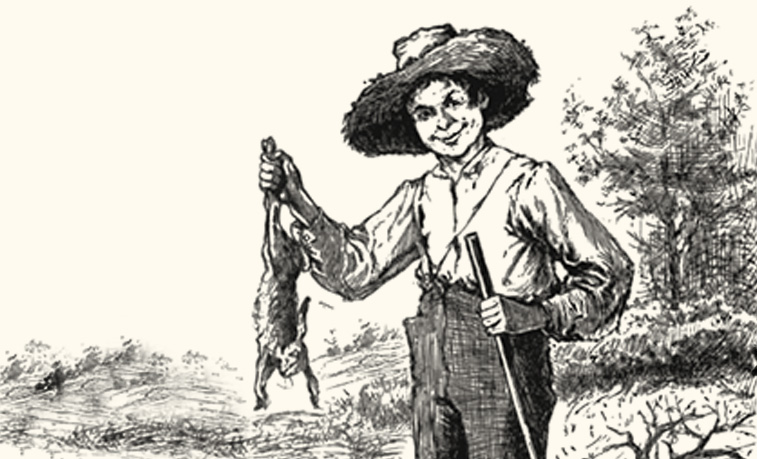 “The Adventures of Huckleberry Finn,” published 135 years ago today, Feb. 18, is considered by many literary experts, including professors at Slippery Rock University, to be one of the greatest novels in American history.

SLIPPERY ROCK, Pa. — All American writing, according to world-renowned author Ernest Hemingway, comes from one book: Mark Twain's "The Adventures of Huckleberry Finn," which was published 135 years ago today, Feb. 18, 1885. "There was nothing before," Hemingway declared in 1935. "There has been nothing as good since." And while two Slippery Rock University professors don't carry the same credentials as Hemingway, they recently offered insight into how Twain's classic novel holds up today despite it being banned in recent decades by schools across the country.

"It's one of the most lauded books in American literature and it's meaningful even today because Twain was so good at showing the hypocrisies of a culture and looking at (our society's) examples of systemic racism," said Rachela Permenter, professor of English. "People were divided (on accepting the novel) even when it first came out because it was supposed to be a story about a boy, but then you have all this horrible behavior: lying, deception and anti-religion."

Although published after the Civil War, "The Adventures of Huckleberry Finn" takes place in the antebellum South and tells the story of a boy, Huck, and his friend Jim, a runaway slave, who travel down the Mississippi River on a raft. Twain subliminally challenged the institution of slavery through the perspective of a Huck.

"Twain wrote a burlesque to show what society was doing to black people 20 years after the Civil War," Permenter said. "It was so subtle and so clever that most people didn't get it, but those who did thought it was too risqué for kids to read. Very few people saw the subversiveness of what Twain was doing, which was pointing out the hypocrisy of civilized culture."

For example, Huck, a 13-year-old boy, narrates the story with a distinct voice that depicts white characters as boorish and insensitive, while Jim is sophisticated and well-adjusted, all to point out the hypocrisies of the time leading up to Jim Crow laws that relegated African Americans as second-class citizens. However, in doing so, racial slurs like the N-word appear in the text more than 200 times.

The American Library Association's Office for Intellectual Freedom lists "The Adventures of Huckleberry Finn" among its 10 most challenged books since 1990, based on the number of complaints that books receive in schools. Based on a show of hands in an SRU American Literature course, only about a third of students were required to read "The Adventures of Huckleberry Finn" in their secondary schools, including at least two who read the book in the seventh grade.

"I think the book should be taught, it's just that students have to be prepared and teachers need to explain Twain's subversiveness and that the readers are going to be extremely uncomfortable," said Permenter. She recommends the 11th or 12th grade as the appropriate age to introduce the novel. "It's not some kids adventure book and then you just say, 'Oh, well, they used that kind of language back then.'"

"As a teacher, if you want students to get something out of this powerful book, you have to get them ready for it so they don't get caught up on the language and not see the great stuff that's in there," said John Hicks, assistant professor of secondary education and foundations of education, who has a doctoral degree in English literature. "There is some sophisticated social commentary going on that middle school students are not going to understand. A lot of (material is taught) a little too early, which happens just to show that public schools are being rigorous and they're teaching the classics. Students might not have the lived experiences to get the satire."

Hicks, who was a public school teacher in a variety of urban, suburban and rural school districts, also said there are several factors that go into the decision to read Twain's book, including the demographics of the school district, where students might not feel comfortable reading passages with their classmates.

Despite challenges in public schools, "The Adventures of Huckleberry Finn" is often found on the shelves of public libraries.

"Libraries in general are against (any) forms of censorship," said Karen Pierce, director of the Slippery Rock Community Library. "You are responsible for what you or your children are reading, so we have the book here and I'm not going to tell people not to read it. But with race relations and the history of the book, it's better not to throw Huckleberry Finn into the mix until (children are older)."

Subliminal social commentary aside, there are many reasons why "The Adventures of Huckleberry Finn" has appealed to the masses to become a classic in American literature.

"Simultaneously you have this story about the river and about what American independence is like," Permenter said. "Floating down the river on a raft, that's freedom, (and Huck) is doing it with this runaway slave and nobody's telling them what to do. You just love this kid who's able to have this innocence about him and be a little rascal at the same time."

Twain took seven years to write "The Adventures of Huckleberry Finn" in what is considered by literary experts to be the "Great American Novel," a term that has endured long since Hemingway's proclamation in 1935.

"(Twain) cuts across the grain in a way that sometimes isn't comfortable but it's very powerful," Permenter said. "You have this American identity of how we can do what we want, but our daily lives aren't really like that, so that's sort of this dream. There's something specifically American about it, and I think that this book hits that. In some respect, we all just want to be on a raft and have everybody leave us alone."