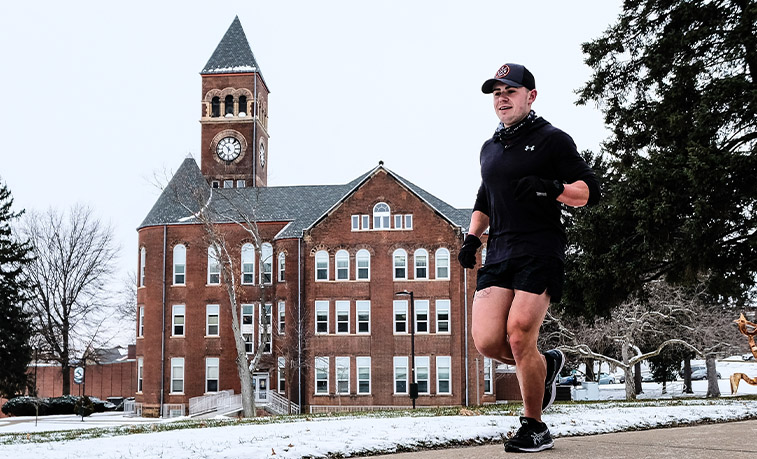 SLIPPERY ROCK, Pa. — Ben Troy is like many college students in that he's pulled a few all-nighters and he's awake at ungodly hours compared to the general population. But he's not staying up late to study or party -- instead, he's up early, running. Troy, a senior Slippery Rock University exercise science major from Wilcox, has not only taken up the sport of endurance running, he runs ultramarathons, including 100-mile races that can take more than 24 hours to complete. To fit in his training for these tests of endurance, he wakes up at 3 a.m. ... every morning.

"Crazy discipline," Troy said, "I've been getting up at 3 o'clock in the morning every day for more than two years. Running is the best thing for discipline, because nobody likes to do it. I'm also super competitive."

Troy isn't training to beat other runners; he's competing against himself and the human capacity for the sustained act of simply putting one foot in front of the other. When he arrived at SRU, he was into weightlifting -- and remains an aspiring strength and conditioning coach -- but he realized he couldn't compete at a high level and push boundaries in that sport like he could as a runner.

"I just decided I wanted to try running competitively," said Troy, who prior to 2019 never ran more than seven miles at a time or more than 20 miles per week. "I signed up for a marathon. And after that, I decided I didn't want to run any faster, but I'd rather go farther and see where that took me. I like the slower pace of a longer race."

But he didn't stop at the 26.2 miles of his first marathon in August 2019, the Drake Well Marathon in Titusville. In fact, he hasn't run an organized race of that distance since. Near the finish line after the race, he spoke to Jeffrey Lynn, SRU professor of exercise and rehabilitative sciences. 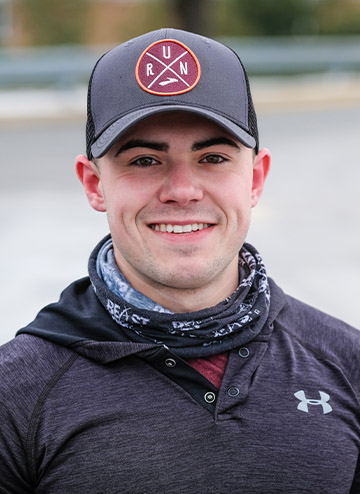 "I remember telling him I wanted to get into ultramarathons and he was giving me pointers and telling me what they're like," Troy said. "I remember vividly telling him then (in Titusville) that, 'Well, that's going to be my goal now, to run a 100-mile race.'"

"He had this paradigm shift after running a marathon and he realized that it was possible to build up for an ultramarathon," Lynn said. "It might take a little longer, but it's the same process to improve a little bit at a time and get to the point where you can cover the whole distance."

Lynn also runs ultramarathons, which are endurance races longer than a marathon, most commonly 50 kilometers, 100 kilometers, 50 miles and 100 miles. He told Troy about the suffering he would expect.

"Based on what I knew of his strength training workouts, I thought that he probably had the mental stamina to make himself do what he needed to do (to accomplish his goal)," Lynn said.

But Troy still had the brain of a neophyte endurance runner, as well as that of a naïve -- perhaps even reckless -- college student. This was evident during the next eight months.

First, he injured his knee halfway through a run at Moraine State Park in October 2019, and had to limp more than 11 miles back to his car in the dark. His recovery, via physical therapy, was swift and Troy found himself back on track by New Year's Eve. By the time he toed the starting at his first ultramarathon race, Feb. 8, 2020, at the Beast of Burden Ultra Marathon in Lockport, New York, Troy was the only one wearing shorts, becoming the object of snickering from his fellow competitors.

"I was very underprepared," Troy said. "I had shorts, a T-shirt and a long sleeve shirt. I had the water pack and all that stuff, because I did research, but I was underdressed for 12-degree weather. People were saying, 'Hey, look at 'shorts guy.''"

Although his goal was to finish the 50-mile course in less than 12 hours, he ran the first 30 miles at a pace to break 10 hours. Then, after stopping at an aid station at mile 38, the cold got to him.

"I remember thinking, 'OK, this is my first real suffering," Troy said. "I was just in a bad place; I was shivering and just making uncontrollable noises." 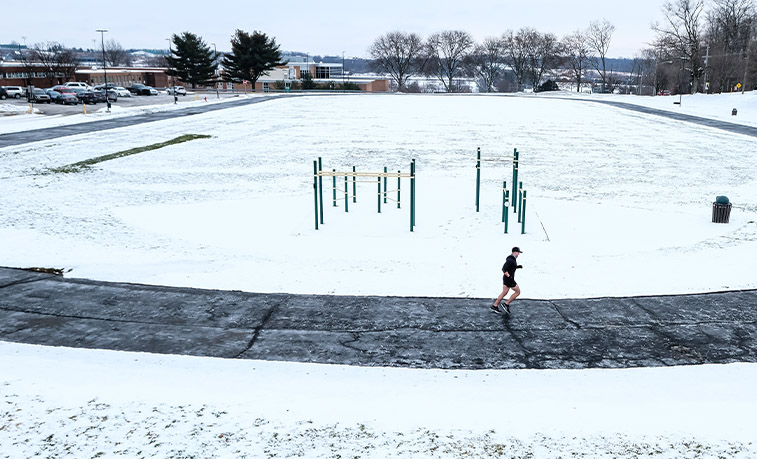 An older competitor, with experience running 100-milers, was able to talk him through the pain and Troy wound up finishing ninth overall among 50-mile runners in 11 hours, 44 minutes. (There were nearly 100 runners at the Beast of Burden across distances of 25, 50 and 100 miles.)

"I thought I was going to die from hypothermia," Troy said. "I sat shivering in my truck for an hour after the race until I was OK to drive. But the second I got back to my hotel room, I grabbed my laptop, laid in bed and went on (UltraSignup.com) and signed up for two 100-mile races, one in March and one in April."

But then COVID hit and the ensuing pandemic canceled many organized races including ones that Troy planned to run.

"There was nothing until the summer and I just didn't want to wait that long, so I decided I'd just run 100 miles on my own, Troy said.

Before he set out on his own, however, he decided to organize his own race, posting it on UltraSignup to see if anyone else would join him. Named the Glen Hazel 100, the race took place in early April near his family's hunting camp in Elk County, following local safety protocols for outdoor gatherings.

Two other people signed up to join Troy but when they arrived, they were apprehensive about the course setup: four laps on a 12.5-mile, out-and-back dirt road with only a single aid station at the start. The runners would have to cover 100 miles with only three stops for aid. Established ultramarathons have aid stations every 4-7 miles.

The two other runners stopped after 75 miles, calling it a day and driving home after their third lap. Troy, meanwhile, was poised to complete his first 100-miler.

Well, that is, until mile 70. First, his foot pain, diagnosed weeks earlier as a "stress reaction," began impairing his stride. Then there was 50 or so minutes that Troy doesn't even remember.

"I woke up about 20 yards off the trail, just sitting slumped over on a rock," Troy said. "I don't know what happened."

"What happened to Troy sounds scary, but I've witnessed exactly that in other runners who blacked out or began hallucinating," said Lynn, who investigated this phenomenon with sleep researchers earlier in his career. "Occasionally there are sleep brainwaves going on in these runners' minds and the hallucinations they experience are actually dreams taking place. You could get so fatigued that you could sit down and immediately fall asleep and then just wake back up 10 minutes later. It's very possible that's exactly what happened to Ben."

After gathering himself, Troy ran the final 30 miles in the same time it took him to run the first 70, but he did it. Eight months after his first marathon, he had his first 100-miler complete in a time of 32 hours, 50 minutes, 57 seconds.

"At the end of it, I was pretty messed up and my foot hurt for a couple months afterward, but I got it done; I finished it," said Troy. "After that, I was all in for ultras, and I knew I could get my time down with more aid stations." 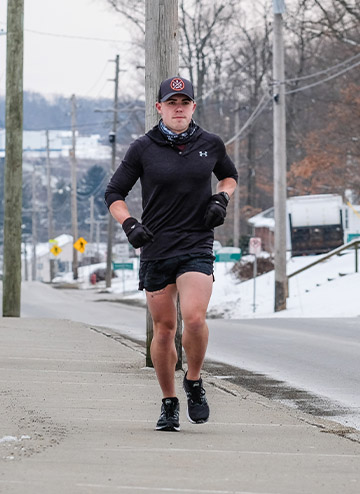 "The transition that Ben made is extraordinary; there's no doubt," said Lynn, who began running ultramarathons in his mid-30s. "Usually, somebody runs a marathon and they might take a stab at the 50K and move up to the 50-miler, but making the jump to 100 miles in the time that he did was remarkable."

Ever the competitor, Troy's next goal was to run a 100-miler in less than 24 hours, what he said is "the gold standard." By summertime he was back to full strength, running a few 50-kilometer races. By the fall, his training peaked as he was running up to 140 miles in a week. In November, he ran his second 100-miler, the Mountaineer Rumble in Blacksburg, South Carolina, a trail run with elevation changes and multiple creek crossings, soaking the runners' feet and causing blisters. Troy finished in less than 31 hours.

Just a week later, Troy ran Ohio's Backyard Ultra, in Lucasville, Ohio, a "last person standing" race where competitors see how many consecutive times they can complete a 4.2-mile course in less than 60 minutes. The last runner who is at the start line at the top of the hour for the most consecutive laps is declared the winner. Troy wasn't expecting to run 100 miles, given he had just run one a week earlier, but his competitive juices kicked in and he ran until he reached the mark, before the 24th lap, thereby achieving his sub-24-hour goal. The race winner kept going until reaching 153 miles.

Troy continued shaving time off his personal record, running the Hainesport Hundred in Hainesport, New Jersey, in 23 hours, 14 minutes, on Dec. 31, celebrating the holiday once again by "running" into the new year.

"I keep thinking that everyone else is going to be partying or getting drunk and I'm going to run 100 miles ... let's go," Troy said. "That's how I am with everything. If I'm going to do something, I'm going to the next level and become crazy with it."

With the pandemic still taking a bite out of the 2021 ultramarathon season, Troy continues doing virtual races and running 100-mile clips on his own. Saying that monotony is one of his skills, he runs these long distances around Slippery Rock, on a quarter-mile track or a 1.5-mile loop on the roads around campus.

His daily routine consists of waking up at 3 a.m. to do strength training workouts at an Anytime Fitness gym near his apartment, before running outside. "Then I'm free to do what I need to do for the rest of the day," Troy said.

What he needs to do, in addition to taking classes at SRU, is work as an intern with the University's Athletics Department as a strength and conditioning coach. Three days a week, Troy reports to Morrow Field House at 6:45 a.m. to help train the men's soccer team. His afternoons are spent with the SRU football team before finishing the day with the women's basketball and tennis teams, ending his days around 7 p.m. 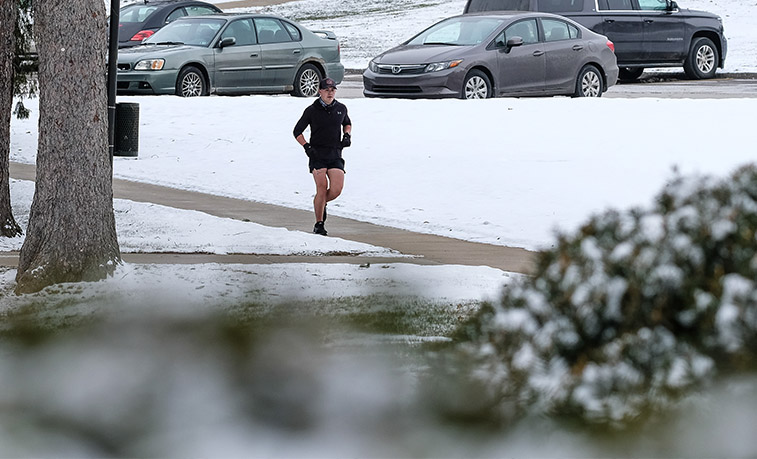 "Ben is like a Labrador retriever; he's always happy no matter how tired he is, he has the same energy, the same enthusiasm and he always has a smile on his face," said Scott Morrison, athletic trainer for the SRU football and tennis teams. "I don't know how he does it. I have a lot of respect for someone that has that kind of focus and determination. I've been a mentor to college students in various roles for 15 years and I've never come across anyone like him."

Troy plans to get a master's degree in strength and conditioning after he graduates in the spring. He also wants to train to become a Navy SEAL, a special operations force that requires some of the most rigorously demanding physical training in the U.S. military. Only about a quarter of the 1,000 recruits make it through the training each year.

And while SEAL training is more than just running long distances, Troy thrives on all types of disciplined activities.

"Discipline is the only way you get better at anything," Troy said. "I just want to be the best that I can at what I choose to do, and that's running 100 milers. Because every time I do it, it's life-changing. Everything else just seems small. All the physical and mental suffering just makes me a better person."