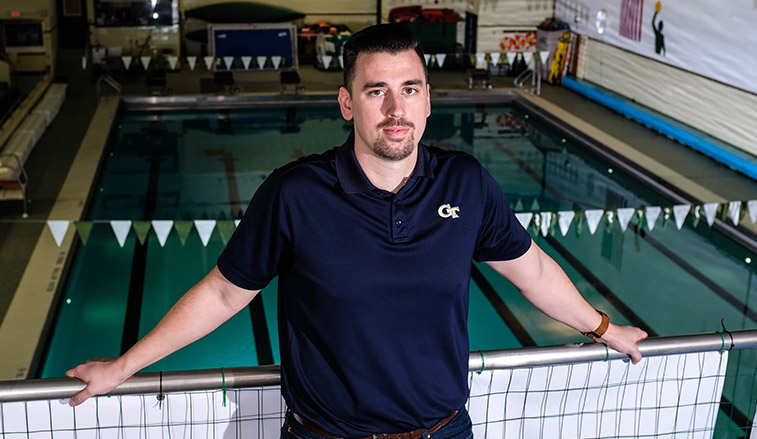 SLIPPERY ROCK, Pa. - "Who did you lose?" That was the question people asked Bob Ogoreuc when he attended his first National Drowning Prevention Alliance conference. Even though none of his close friends or family members were drowning victims, the question still weighs heavy on his mind.

"They were like, 'Then why are you here?'" said Ogoreuc, a Slippery Rock University assistant professor of physical and health education, who eventually served two terms as the NDPA president from 2010-13. "That's a powerful question. I was there because I'm an aquatics educator. I love teaching people. And I love, as a lifeguard, that I'm protecting people and keeping them safe." 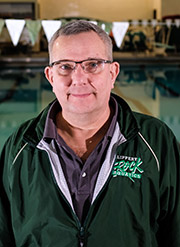 While eliminating all water threats or tragedies will never happen, educating people about how to prevent them can help mitigate their effects. That's where people like Ogoreuc come in. He serves as the aquatics director at SRU and developed the University's aquatics minor, which prior to the late 1990s was an emphasis for physical and health education majors.

Now, the aquatics minor averages 50 students per year, including students majoring in exercise science; sport management; safety management; and resort, recreation and hospitality management among others.

SRU is recognized as a source for leading talent in water safety and drowning prevention and other aquatics professions such as recreation directors, swimming and diving coaches, scuba instructors and waterpark managers.

"Our name is out there so that if you want to hire someone who has experience and the right certifications, people come here to 'shop,'" said Ogoreuc, whose list of SRU graduates working in aquatics is surpassed only by the number of people who call him to recommend candidates. "When we go to conferences, it's 'There's another SRU graduate.' We've made a good impact in the field."

Ogoreuc multiplies the impact and potential lives saved by sharing his knowledge with students not only at SRU, but also by working with first responders at conferences, community swimming pools and on beaches. During the summer months of 2000-09, Ogoreuc was a lieutenant and training officer for the Ocean City (New Jersey) Beach Patrol where he developed training programs for lifeguards, police and firefighters - people who were on the front lines during the Hurricane Sandy recovery efforts of 2012.

"Bob has such a vast array of experiences," said Adam Katchmarchi, a 2012 SRU graduate with a degree in health and physical education education and an aquatics minor. "He brought those experiences to the classroom. My favorite part of the SRU program is how it's tied in with the health and physical teacher education program, so you're able to establish a good basis on how to teach water safety and drowning prevention."

Katchmarchi said he graduated from SRU "10-15 years ahead of the average aquatics professional" because he volunteered to teach classes, attended conferences and obtained certifications under Ogoreuc's guidance.

Katchmarchi was recently named executive director of the NDPA, a non-profit organization created to provide the public with drowning prevention and water safety education and programs. Drowning is the leading cause of unintentional injury deaths for children ages 1-4 in the U.S. and the fifth leading cause for all ages. There are 1.16 fatal drownings per 100,000 people in America according to the most recent Center for Disease Control and Prevention reports. From 2005-14 there was an average of 3,536 fatal unintentional drownings from non-boating incidents per year.

"I'm able to take what I see in the research and the knowledge I've gained over time and actually do something to put it into practical application, which not many people in my position, especially at a university, get to do," said Katchmarchi.

In addition to his duties at the NDPA, Katchmarchi is an assistant professor and the aquatics director at Indiana University of Pennsylvania, completing a teacher-student circle: Ogoreuc graduated from IUP in 1989 before coming to SRU as a varsity swimming coach in 1990 and becoming a faculty member in 1996. 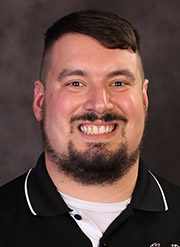 "It's not so much what he's doing with his career and what he's accomplishing, but it's what his students are going out and accomplishing," Katchmarchi said. "Bob's legacy isn't the program; it's what the people in it produced. That says everything about an educator."

When asked to compile a list of alumni working in the aquatics field, Ogoreuc filled a page with the names of high school teachers and coaches, recreation directors and facility managers. They work locally, like Valerie Murphy, '10, recreation program coordinator for Cranberry Township Parks and Recreation; and nationally, like Michelle Poth, '13, environmental health and safety specialist at SeaWorld's Orlando, Florida headquarters. There are also graduates managing large campus recreation facilities at large universities, including Emily Wujcik, '16, aquatics and safety coordinator at Saint Louis University, and Nate Randall, '13, aquatics coordinator at Georgia Tech.

An exercise science major with a minor in aquatics, Randall interviewed for the Georgia Tech job before graduating from SRU, thanks to an Ogoreuc reference to Dave Williams, who at the time was GT's associate director for campus recreation.

"I was able bring a lot to the table that I learned from the aquatics program and exercise science at SRU," said Randall. "The biggest thing at SRU is they don't pigeonhole you into one area of aquatics; they open it up to other areas."

A big part of Randall's duties at Georgia Tech is lifeguard management and training. He oversees nearly 100 lifeguards and pool operations staff at the McAuley Aquatic Center, a 300,000-square-foot facility with more than 2 million gallons of water that was built for the 1996 Summer Olympics in Atlanta.

The center is open daily for GT students, a host of clubs, as well as for special events like the Georgia State High School Swimming and Diving Championships. The U.S. swimming and diving teams trained there to prepare for the 2016 Summer Olympics.

"My friends think all I do is walk around in a Speedo all day and just lifeguard," said Randall, who also manages a $500,000 budget for staffing, supplies and operations. "It's definitely a lot more than that. One day is never the same as the next. There are always new challenges."

Members of the SRU swimming and diving club team also visit each year when GT hosts the Collegiate Club Swimming & Diving Championships, giving Randall an opportunity to give tours to SRU students and brag about his alma mater to coworkers and continue to spread the University's name around the aquatics world.

"When you have that SRU connection, it's cool because no matter where you are it all started at that (Morrow Field House) pool," Katchmarchi said.

"Every one of our grads has a passion for aquatics and a desire to succeed and to make a difference," Ogoreuc said. "I try to tell everyone, 'When your career is done, did you leave a footprint?' They're out there creating their own."

Whether on sandy beaches or pool decks, there are many footprints following the steps that begin at SRU and point to saving lives.