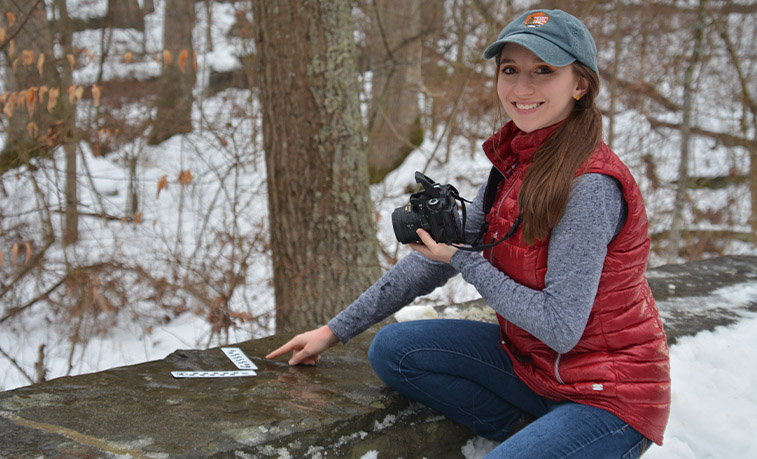 SLIPPERY ROCK, Pa. — Just as fossils can be found among the rock foundations of buildings, so too can interests and vocations be embedded within families. This comparison certainly applies to a research study at Slippery Rock University involving two students, a professor and a paleontologist whose daughter is one of those said students.

This quartet explored the widespread occurrences of fossils and fossiliferous stone found within historic and prehistoric human-made structures, calling attention to unique insights into the human dimensions of paleontology, which is the study of fossils. Examples include dinosaur fossils found in the capstone of a stone bridge in the Gettysburg National Military Park and petrified wood in the foundation of the Theodore Roosevelt Lodge in Yellowstone National Park.

"Instead of choosing one historic site, we looked at multiple areas and their paleontological resources to get different perspectives," Santucci said. "For me, I have interest in natural and cultural resources, and having gone to national parks while growing up, my dad would point out all these unique features." 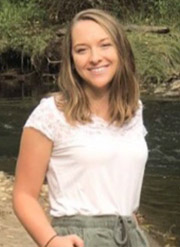 Santucci's father, Vincent Santucci, is the senior paleontologist for the U.S. National Park Service. Having authored and co-authored several research articles during his career, Vincent Santucci pointed out another unique feature: his daughter's and Moneymaker's paper had potential to be published in a journal, a rarity for undergraduate students, for the benefit of the entire paleontology community. Having learned about his daughter's research and the novel concept, Vincent Santucci presented the idea to Lisco to pursue publication.

"This collection of research hasn't been done before," Vincent Santucci said. "Brianna and Carol really dug into it and they did a wonderful job in terms of data mining and pulling information together that was relevant and interesting. This is something that is of interest to what we do as professionals in the National Park Service and elsewhere dealing with historic structures."

Some structures feature fossils and fossiliferous stone both intentionally and coincidentally. For example, in Washington, D.C., the Washington Monument features commemorative stones for each of the 50 states, including Arizona's which features petrified wood, while the Lincoln Memorial was built using a type of limestone that happens to be "extremely fossiliferous," according to researchers. Elsewhere, the walls of the fortification preserved at Castillo de San Marcos National Monument in Florida are constructed of coquina, which are shells of invertebrates that are ideal for absorbing and minimizing damage from cannon balls.

After refining the work, the four co-authors submitted the article, titled "An Overview of Paleontological Resources Preserved Within Prehistoric and Historic Structures," to a journal and it was published in the New Mexico Museum of Natural History and Science Bulletin 82: Fossil Record 7. There are more than 20 historic and prehistoric sites described in the paper.

"The editors looked at it said, 'Yeah, this is fun stuff; we want to include it,'" Vincent Santucci said. "I'm proud of the two young ladies and I think the end result was something very useful and a nice contribution, and we've gotten a lot of positive feedback."

Both Brianna Santucci and Moneymaker said they will benefit from the experience as they pursue graduate school and consider a broad range of professional opportunities in resource management, either as interpretative rangers or naturalists. The dinosaur footprints, from a theropod, found in the stone bridge in Gettysburg are
from the Triassic Period.

"This was a really great experience, just to be a part of the writing process and working with editors and improving the different drafts," Moneymaker said. "To see the transition from the academic to professional world was incredibly interesting, and it was an honor to be a part of the process. We're grateful for (Vincent) and how he was excited about this project and how this all came together for us."

"There was a lot of teamwork and Vincent was our go-to expert, but I saw the first drafts and you could tell the students had done their research very well," Lisco said. "It was never a given that this would be published, and you can see from their work that they are just rock-solid students."

The sentiment of a "go-to" resource is also reciprocated from Vincent Santucci and the NPS to Lisco and the entire SRU park and resource management program. The reason that Brianna Santucci is attending SRU goes well beyond the fact that her father was once a part-time instructor at the University in the mid-1990s.

"From the National Park Service perspective, Slippery Rock University is the Harvard University of parks and recreation," Vincent Santucci said. "We in the Park Service love (Dr. Lisco). He does a tremendous job of getting students ready for careers and when we see applications that have students from SRU, we know that those students are likely to be high quality and usually get interviewed. That's a credit to (Dr. Lisco) and his predecessor, Dr. Bill Shiner, who helped build the department."

Shiner, who passed away in 2018, started what is now the SRU Department of Parks and Conservation, serving as chair and professor for 31 years.

"That fact that Vince considers our program the best in the country says a lot because he's been out in the field for more than 37 years," Lisco said. "But you have to give credit to these students. They are both excellent and they did an outstanding job with this research. That's pretty impressive for an undergraduate to get published."