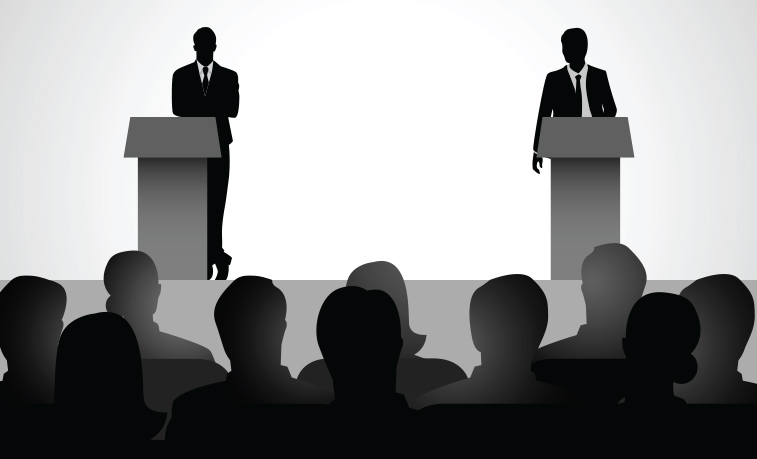 SLIPPERY ROCK, Pa. — Two Slippery Rock University students will put their lessons in civil discourse into practice this week as they prepare to debate counterparts from the Japanese National Debate Team at 6:30 p.m., Feb. 27 in the Vincent Science Center Auditorium.

Vincent Science Center is located at 106 Central Loop, Slippery Rock, 16057, and is accessible. The event is free and open to the public.

The debate is a part of a tour sponsored by the National Communication Association, the Committee on International Discussion and Debate and the Japan Debate Association. The Japanese delegation will visit several U.S.-based institutions to compete in public debates, including the stop at SRU that is being co-hosted by Duquesne University.

Representing SRU will be Maggie Calvert, a senior triple major in political science, philosophy and interdisciplinary studies from Butler; and Megan Thomas, a senior English writing major from Johnstown, who are members of the Debate Society at SRU.

The opportunity for SRU's students to take part in the international debate was made possible through a DU invitation to Tim Michaels, an SRU instructor of communication and coach of the Debate Society at SRU. Michaels was formerly a debate coach at DU.

"When the NCA decided to sponsor a tour for Japanese National Team, Duquesne reached out to me and asked if we would be interested in being co-hosts of the western Pennsylvania stop," said Michaels. "I jumped at the opportunity, thinking this would be such a great way to showcase our student's skills in a public forum while also providing new perspectives on global cultures to the campus.

"As a relatively new student organization on campus, we've primarily been traveling to other universities and locations to participate in debates; we've been wanting to establish a foothold with a more public event on our campus so we're really excited about having this opportunity."

The Feb. 27 debate will begin with opening remarks and student introductions provided by Michaels, followed by a one-hour debate and supplemental question-and-answer session.

The topic of the debate will center on U.S.-Japanese relations with a focus on the U.S. military's presence in Japan and whether or not that presence should be maintained, reduced or terminated.

While the debate will be of a diplomatic nature, meaning there will be no nominated winner at the end, a panel of judges comprised of SRU faculty members will provide post-debate analysis to the participants.

"Winning or losing isn't meaningful in this particular debate," said Michaels. "The opportunity to take part in an international collaboration like this is a truly unique experience for our students that should be cherished. The point is to learn about and explore topics and engage in some civil discourse with our partners on the other side of the globe."