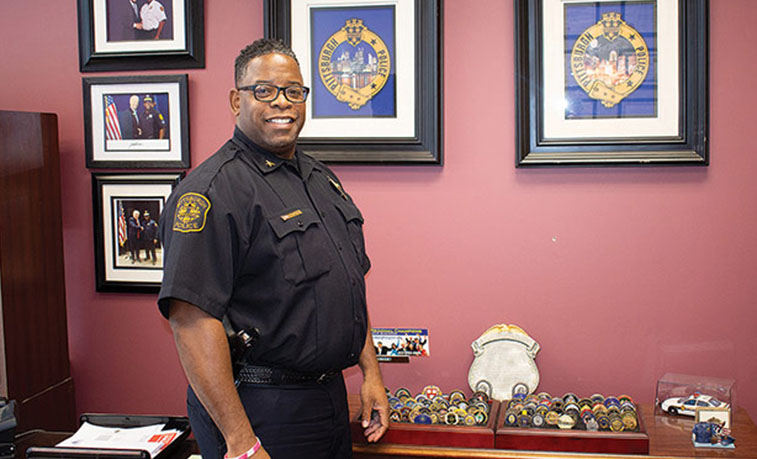 Cmdr. Eric Holmes, a 1993 Slippery Rock University graduate with a degree in communication, has served as a member of the City of Pittsburgh Bureau of Police in 1997, including the last five years as chief of staff (photo courtesy of Brandy Richey, Point Park University).

SLIPPERY ROCK, Pa. — As a 25-year veteran of the City of Pittsburgh's Bureau of Police, Cmdr. Eric Holmes understands the type of person he is and his role in the community. To Holmes, carrying a badge or having the high-ranking title of chief of staff, which he's had since 2017, are more signs of status than a description of his livelihood.

"I'm a service-oriented person," said Holmes, a 1993 Slippery Rock University graduate with a degree in communication. "I get to live a life of service and being a police officer means that I give back to the community."

Holmes, who grew up in the Penn Hills neighborhood of Pittsburgh, discovered himself and the opportunities to succeed while at SRU.

"For me, as a minority from the suburbs of Pittsburgh and going to a rural campus, I was welcomed with open arms and provided so many opportunities (at SRU) and that really allowed me to find out who I was as a person," Holmes said. "When you're on your own and away from home for the first time, you can be hesitant or nervous (in public situations) but everyone at SRU provided this environment, not only for me but for my friends, to figure out where we were as people, to earn a great education and to flourish in leadership roles on campus. (Being at SRU) was a pivotal point in my life where I recognized that I had all the tools that I needed to be successful, they just needed to be brought out."

Holmes became a student representative on SRU's council of trustees and that opportunity led to a dinner at the governor's mansion, where he shared a table with other trustees and well-connected politicians. As was customary at the time, Holmes collected numerous business cards throughout the evening. One encounter at the dinner led to an internship at the White House in the Office of Presidential Correspondence, a department that is responsible for processing all mail, email and parcels addressed to the President of the United States.

"While (at the White House), I saw the uniformed Secret Service officers and the presidential protection detail, and I thought that maybe law enforcement, and serving in this capacity, would a good thing for me to do," said Holmes. 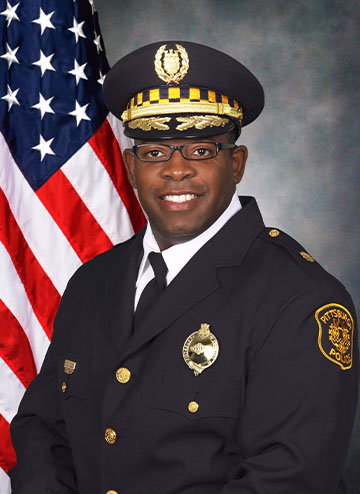 His first job in law enforcement was as a police officer at the University of Pittsburgh, before joining the Pittsburgh Bureau of Police in 1997, despite his having an undergraduate degree in communication and not criminology or criminal justice.

"A really great foundation was set for me while at SRU," Holmes said. "I was a communication major and I continue to use communication every day in my role."

As chief of staff, Holmes oversees a variety of units within the bureau, including the Intelligence Unit, Crime Analysis Unit, Real Time Center and Dignitary Protection, the latter meaning that when the U.S. president or vice president are in Pittsburgh, Holmes and his officers are helping coordinate the visit. He's also the liaison for several national initiatives that are implemented locally, such as one for building community trust and justice, and he supervises approximately 30 officers, sergeants and lieutenants.

Holmes earned a master's degree in criminal justice administration from Point Park University, a certificate in executive leadership from Carnegie Mellon University, and he is a graduate of the Senior Management Institute for Police.

His service to SRU didn't end after he graduated, as he returned to the council of trustees from 2009-13, this time as a regular member, and became the first Black person to serve as the council's chair in 2012. Holmes also funded a scholarship at SRU.

His most recent professional achievement was completing the Executive Leaders Program at the Naval Postgraduate School Center for Homeland Defense and Security. Holmes was selected for the rigorous, yearlong program to collaborate with homeland security officials from across the nation on current policy, strategy and organizational design challenges, which required four, weeklong in-residence trainings in Monterrey, California.

"The common denominator between all of us (in the ELP) is that we're all responsible for keeping people safe," Holmes said. "We had people in our class from law enforcement, military, health care, and we even had someone from Disney (theme parks), anyone responsible for building quality of life for the public at some level. We talked about everything from technology, intelligence, climate change, and all the hot topics that we're dealing with right now."

The pandemic, social justice and police reform are all issues that Holmes confronts on a daily basis.

"(In law enforcement) we're at the confluence of events between the pandemic, police reform, and civil unrest and we face ongoing challenges," Holmes said. "We're trying to navigate what society wants in terms of their public safety service and recognizing what 21st-century policing is and understanding the legacy of law enforcement in this country, and we're doing all of this during a pandemic.

Aside from all his credentials, what Holmes takes most to heart are the reconciliation between the police and citizens, even in the unlikeliest of circumstances, such as a time when a civilian was shot and paralyzed by a police officer.

"For me, that was my greatest achievement, the work that we did to bring two individuals together, whose lives were forever changed, in the form of reconciliation," Holmes said. "Having studied procedural justice, implicit bias and reconciliation as part of my work with the national initiative for community trust and justice, bearing witness to that reconciliation has been the most rewarding part of my career as a law enforcement officer."