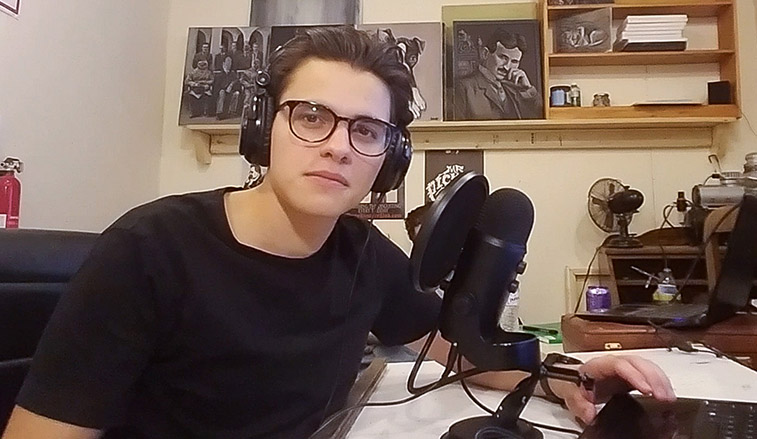 SLIPPERY ROCK, Pa. - Thomas Thompson realized long ago that many topics covered in history classes, and by correlation, the general public's understanding of past events, often disregard details and themes that are considered taboo or in poor taste. Seeing an opportunity to satisfy the public's curiosity, he decided to do the "dirty work" by creating a podcast to address issues that may have been glossed over in textbooks.

The Slippery Rock University senior secondary education major from New Castle is the host of the Dirty History Podcast, a weekly podcast that covers historical topics that are more often than not overlooked by educators and academics alike, not because they are unimportant, but because they are, according to the show's description, "unpleasant, feminine, vulgar, unreasonably violent, shamelessly sexual or otherwise beneath standards of taste."

"People don't talk about these topics in history classes because they are (seen as being) below standards of taste, so instead we talk about them," said Thomas, whose show topics include everything from slaughterhouses and cannibalism to public executions and blood sports. "These topics are really important to understand the whole kit and caboodle when it comes to history and humanity."

Thomas' inspiration for the show came from many places, but he said one SRU class that got him thinking more deeply about dirty history was Violence in Post-1945 Europe, a 400-level history course taught by Lia Paradis, associate professor of history. The course focused on three case studies: displaced persons and the refugee crisis as a result of the collapse of governments following World War II; the sectarian violence in Northern Ireland from 1968-2000; and the wars in the Balkans in the 1990s.

"History students and the public in general have a misperception of the path of history," Paradis said. "They often think that everyone was better behaved, more polite and morally straight-laced in the past. There's this misunderstanding that you're supposed to be looking at history for uplifting, motivational stories and ideals that you're supposed to be reaching for. That's one of the things that surprises a lot of college students that (history is) actually much more engaging, complicated and dirty than what they might have thought when they were just reciting names, dates and places in high school.

"We're supposed to also be looking at the worst of humankind as well as the best of humankind, and if we don't investigate things because they are in poor taste then that means we are not understanding what human beings are really about."

The worst of humankind is typically covered in history courses as physical violence in the context of war, but Paradis' class addressed other examples of extreme human behavior outside of war, like the orphans of post-World War II Germany who became known as "wolf children" in order to survive and the paramilitary prisoners of Northern Ireland who carried out "dirty protests" by smearing excrement on themselves as a form of civic protest, both topics which became Dirty History Podcast episodes.

While Thompson admits that the mere selection of topics can be considered a political or social stance, he maintains an objective presentation.

"We just present the facts," said Thompson, who has research and production assistance from Woodrow Cowher, a friend who is a freelance artist and illustrator Philosophy Now magazine. "If something seems ridiculous, I may present it sarcastically, but other than that, I don't do much of the analysis; I leave that up to the audience. Typically when you push the envelope, it tends to move, and people react when you talk about stuff that you don't typically talk about."

Thompson's favorite episode so far is "Episode 19, In the Colosseum," that dealt with public executions in ancient Rome and death as a spectator sport. Thompson asks the audience profound questions about violence and civility being diametrically opposite; can someone be civilized while also enjoying violence; can live violence can be rationalized depending on who is being killed or tortured; and if people today are considered civilized or barbaric because they enjoy simulated violence in movies and video games.

"If you look at history there are these themes, certain things that pop up time and time again when you talk about humanity, things that are inherently violent or tribalistic, lustful or sexual, so we pick topics that define these themes," Thompson said. "They are the most extreme of human behaviors."

Thompson, an aspiring school teacher, has learned that producing a podcast also requires extreme work, as much as 40 hours per week to research, write, record and edit one 30-minute show.

"It's a lot more than I expected," said Thompson, who has since received help from Cowher and is vetting additional help. "I can see how it takes years to write a book because doing a 30-minute podcast is quite an undertaking. It's been crazy. I was going to push (the frequency of shows) back, but I managed to stay ahead and it's paid off. It's a strenuous process, but I'm happy I kept doing it."

"He's a born communicator and he's going to be a great teacher because he understands how important it is to craft an effective narrative and structure for a course so that it's engaging, educational and challenging," Paradis said. "That's indicated in the work that he's put into this."

Thompson plans to continue to grow the podcast by adding video and articles to complement the audio content. The Dirty History Podcast, with new episodes each Tuesday, is available on most platforms where podcasts are found, including iTunes and Stitcher.