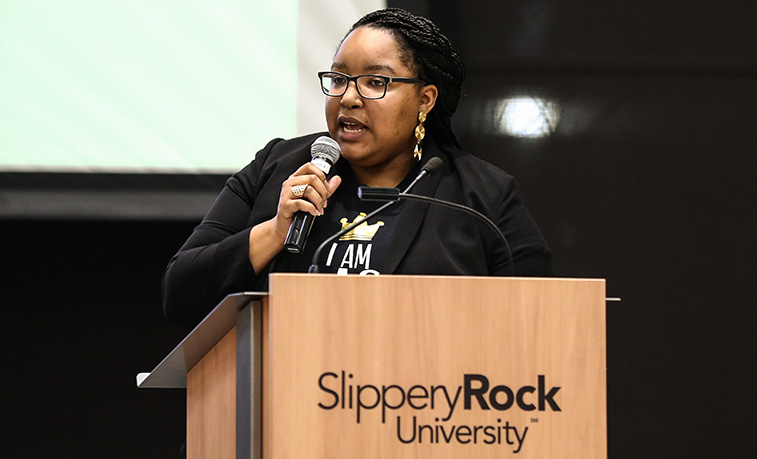 Kennedy Moore, a senior at Slippery Rock University, is a student representative on the President’s Commission for Racial and Ethnic Diversity who leads and moderators several conversations on campus addressing diversity and inclusion.

SLIPPERY ROCK, Pa. - What would Slippery Rock University look like if it were to become a more racially diverse community? That was a question asked at a recent event co-sponsored by the President's Commission for Race and Ethnic Diversity, an advocacy group that's looking to further develop its vision for diversity and inclusion for the University. Questions drive conversations - to ultimately arrive at answers - so having those thoughtful conversations is what the PCRED is putting an emphasis on, said Commission leaders.

"Having that conversation is the most important thing," said Christine Pease-Hernandez, assistant professor of communication and co-chair of the PCRED. "It's engaging in civil discourse ... but it's also about opening up spaces for people so they can talk in a respectful manner."

Talking about race is not an easy conversation to have, according to Corinne Gibson, director of SRU's Office of Inclusive Excellence, who is also a co-chair of PCRED, which is comprised of more than a dozen faculty, staff, students and community members. 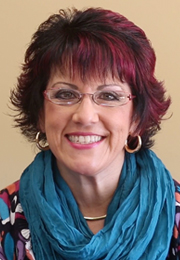 "Race always seems like one of the more difficult conversations, so it's important to create safe spaces for those conversations to take place," Gibson said. "That is where I see the campus moving toward, having smaller group conversations at events that are already happening and empowering people to be more courageous about asking questions."

About 30 students from varying racial and ethnic backgrounds attended the Feb. 6 event in the Weisenfluh Dining Hall. Students worked in small groups and rotated to stations where they addressed questions about how they experience race on campus, before coming together to share their thoughts and ideas, which were captured and distributed to various campus departments including the Office of the President.

"It was successful in terms of the group of people who came out because a lot of them hadn't even thought about race or even thought of it as an issue on campus," said Kennedy Moore, a senior resort, recreation and hospitality management major from Braddock. "(It was a success) just to have students come outside of what they knew and have conversations with people to address the issue of racial and ethnic diversity. That's something that needs to be tackled head-on."

Moore is the former president of the Black Action Society. She is currently serving as the SGA vice president of diversity and inclusion and as a student representative on PCRED. 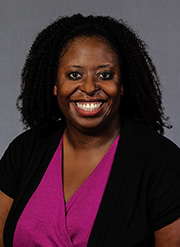 "A key takeaway was that everyone experiences race differently," Moore said. "I always felt that I've had support systems during my time here at SRU. It's important to understand why students (have concerns) and why they don't get to tell people about it."

Gibson said this type of feedback will help PCRED identify new initiatives, and not just function as a commission that supports only the programming of guest speakers or films.

"If we just did programs, it may only leave us with the same group of people that attend each one," Gibson said. "We want to connect with people that we've not connected with before. To do that takes time to evaluate where we are then you move forward. We are going to use some of the energy (from hosting programs) toward finding major concerns (of the campus community) that we can address in regard to policies and relations. Then we can have more purposeful programming around what we determine the issues are, as opposed to being reactive."

In addition to conversations spurred on by events like the Community Cafe, another way the PCRED will assess needs of the campus community related to diversity and inclusion is a Campus Climate Survey that will be distributed to students by the Office of Student Success later this semester.

To request more information about the PCRED or to voice issues for the commission to address, email pcred@sru.edu or contact the PCRED co-chairs by calling Gibson at 724.738.4911 and/or Pease-Hernandez at 724.738.2563.