SRU Theatre brings “Heathers” from silver screen to the stage 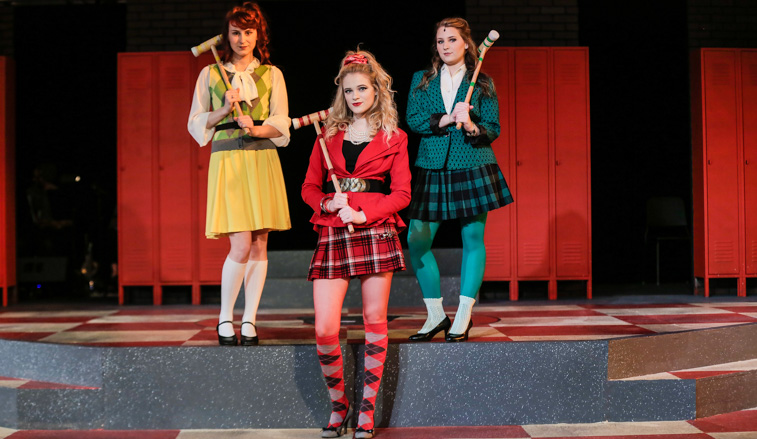 SLIPPERY ROCK, Pa. - By her senior year, Veronica Sawyer is exhausted from the bullying that consumes her high school. The tormenting is ruthless, and the school has succumbed to a brutal social hierarchy that is enforced by the oppressors. All she wants is to rise above the drama.

At the top of the school's "food chain" are the Heathers: Heather McNamara, the weak-willed head cheerleader; Heather Duke, a bulimic, personality-lacking head of the yearbook committee; and Heather Chandler, the "mythic bitch queen" of the school. They are the ultimate clique - the most beautiful and popular girls who are admired by the entire student body, through either fear or fame.

When Veronica is adopted into the group after helping the Heathers avoid detention, she instantly acquires special status. She's now part of the most popular clique at her high school. But there is a problem, she disapproves of the other girls' cruel behavior. When Veronica and her boyfriend, J.D., confront clique leader Heather Chandler and accidentally poison her, they make it appear a suicide. Soon Veronica realizes that J.D. is intentionally killing students he does not like. She races to stop J.D. while also clashing with the clique's new leader, Heather Duke.

Three decades after actors Winona Ryder and Christian Slater brought the production to movie theaters, Slippery Rock University's Theatre Department will bring the cult classic to the stage in "Heathers: The Musical."

"The play is a very dark comedy in which (J.D.] helps Veronica take revenge," said David Skeele, SRU professor of theatre and the musical's director "It begins to go too far and Veronica realizes that it's not the answer she was looking for and has to find a new way to navigate the whole situation."

The production's representation of a brutal high school is geared toward a mature audience, but according to Skeele, it has the potential to "cheerfully offend everyone." The musical explores themes including teen suicide, school violence, bullying, sexuality and body shaming.

Yet despite the severity of the events that take place on stage, the musical is delivered with a healthy dose of humor and comedy.

"There is a certain kind of joy that a college actor gets when they play someone who is going through things that are familiar and relevant to their lives," said Skeele.

Skeele, who has directed more than 40 shows during his tenure at SRU, said the auditions for "Heathers: The Musical" were impressive. "Students came into the auditions knowing every song and every moment; they were very prepared.

"It's a professional-caliber show, with an ace choreographer, vocal and musical directors. It is an amazing experience for a student actor."

The "Heathers: The Musical" cast includes:

Tickets, priced at $12 for students and $15 for the general public, are available for purchase at the door. A March 3 "Community Night" performance will offer all seats for $12.