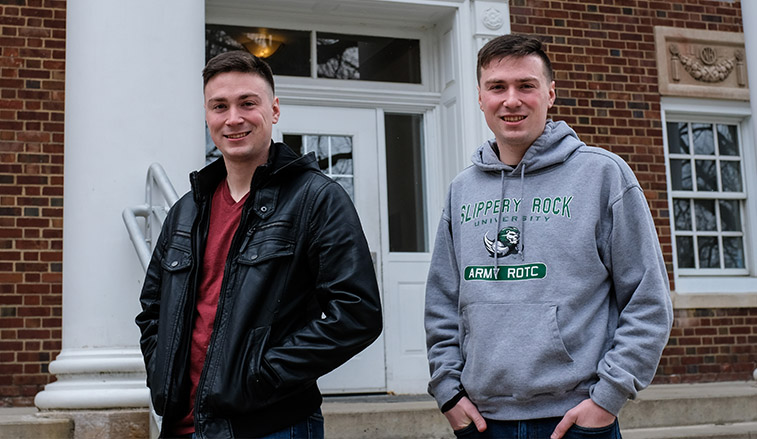 From left, Michael Lugowski and Matthew Lugowski not only followed the same path in becoming students at Slippery Rock University, but they also entered into the Army National Guard and SRU’s Army ROTC program together.

SLIPPERY ROCK, Pa. - When enlisted military personnel stand at attention to address their commanding officer, not many are asked to do so with an about-face turn, but for two cadets from Slippery Rock University's Army ROTC unit, that's the only way their cadre can tell them apart.

Matthew and Michael Lugowski, junior psychology and political science majors, respectively, from Crescent, are identical twin brothers -- a designation that can't be underscored enough by the head of their ROTC unit.

"When I say identical, I mean they are amazingly identical; they are indiscernible," said Col. Joseph Richey, professor of military science and department chair. "My biggest challenge is telling them apart. The only physical difference I've noticed between the two is Michael's right ear is a little bit pointed and Matthew's ear is rounded, so I have them turn their head when I'm talking to them."

Richey recognizes the importance of telling the Lugowski twins apart because his evaluation of them is submitted to Cadet Command, and is one of many factors that go into cadets' national ranking on the Order of Merit List. The OML determines preference given to cadets for their branch duty assignments following graduation and commissioning.

And while neither brother is pulling the other down, making sure they each get the proper credit they deserve can be an issue. Michael said his grade for a lab exercise, where he simulated calling for fire from a unit of lower-class cadets, was mistakenly credited to Matthew when it was entered by Master Sgt. Taylor Donohoe, senior instructor of military science. Michael scored a perfect 100 and Donohoe made the correction. The brothers laugh about it now, but they recognize how they raise each other's performance.

"We both want to do well in whatever we are doing, so to have someone set a higher standard than yourself is always going to motivate you to become better," said Michael, who dismissed any assumptions their competitiveness is motivated by a sibling rivalry. "Our relationship is different. We are each other's best friend and while we hear stories of other twins hating each other because they don't like having someone who's a lot like them, we like each other's company. If one of us does something, the other is typically going to follow."

That's how they both ended up at SRU. After each considered attending a larger university, the pair chose to stay relatively close to home at a smaller, more affordable school. After their first semester and maintaining a healthy aversion to student-loan debt, Matthew considered joining the Army National Guard to take advantage of the tuition assistance program. Following his brother's lead, Michael also decided to join the Army National Guard. In fact, they were sworn in on the same day. Although they both had to miss a semester of school for basic training, they soon returned to SRU and enrolled in ROTC.

"We both want to do things our own way but one of us ends up giving in," said Matthew. The brothers have family members who have also served in the military and as first responders, including a grandfather who served in the U.S. Navy and fought in the Korean War. "Service to the community flows through our family," Matthew said. "Everyone was supportive and proud that we made our decision and came to our conclusion."

Matthew and Michael each appreciate the small class sizes at SRU and the quality of the ROTC program. The close-knit community means they get to know their professors and fellow cadets, and the feeling is reciprocated despite the challenge in telling them apart.

"The quality of cadets that SRU puts into the Army is astounding. We compete with and against other ROTC programs and are always performing well against programs from larger colleges across Pennsylvania," Michael said. "Considering how (small) we are, it's amazing."

The Lugowski brothers help contribute to that quality.

"They exemplify what we want in a cadet," Richey said. "They are modest, humble, physically fit; and they do well academically and are active in the program with leadership roles. They are going to be great officers in the Army."

Richey said he's never encountered twin brothers in the same unit during his 23-year military career and that he appreciates the dynamic it brings to SRU's ROTC program. However, after the Lugowski brothers graduate and are commissioned, which is planned for December 2020, they will likely go separate ways.

Matthew, on the other hand, enlisted in the National Guard for Military Police. He wants to pursue active duty immediately after commissioning. Whether or not active duty is in store for Matthew, he said he'd eventually like to enter a career in forensic psychology.

Wherever they wind up, the Lugowski brothers will always be part of a family unit that will elevate each other's performance.

"I like competing no matter what and I like getting to the top, so having someone else there makes me want to do better all the time," said Matthew, who added that whether it's the number of push-ups or their grade-point average, there's competition between the brothers, even if it is light-hearted. "We'll poke fun at each other if we think the other is slacking. We both shame each other into doing better. It works for us."