SRU looks back at Yellowstone trip on park’s 147th anniversary 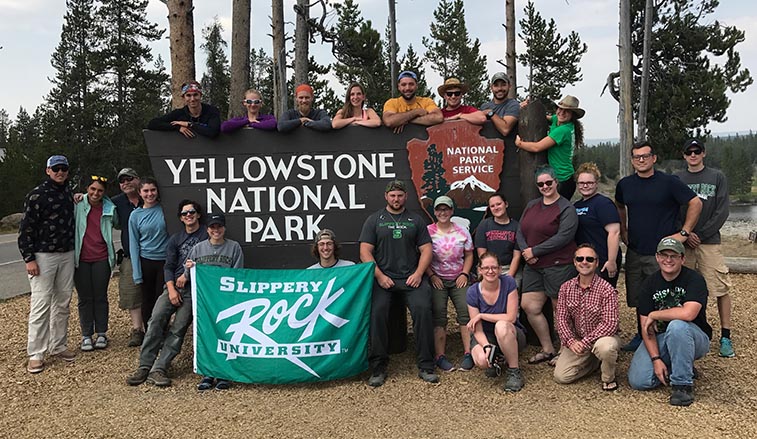 SLIPPERY ROCK, Pa. - Three years ago, a group of students from Slippery Rock University's Parks and Resource Management program celebrated the centennial of the National Park Service by traveling to 10 national parks. With stops mostly in the southwestern United States, the group's travel log included a visit to one of the most popular, the Grand Canyon. But one national park that wasn't on their itinerary was America's first, Yellowstone Park.

Last summer, a second SRU contingent was able to add the park, the nation's oldest, to list of those visited. Yellowstone Park preceded the establishment of the NPS by nearly a half century. Today, March 1, marks its 147th anniversary.

"Yellowstone is very significant because it's the first national park," said John Lisco, SRU associate professor of parks, conservation and recreational therapy, who each year since 2016, has led student trips to national parks. "It's certainly our crown jewel and the prime example of what a (national) park should be like. There's no place like it."

That is exactly what the U.S. Congress concluded when President Ulysses S. Grant signed the Yellowstone Act of 1872, setting aside 1.2 million acres of public land in what now straddles the borders of Wyoming, Montana and Idaho. Trappers, led by John Colter, were the first Anglo explorers to experience Yellowstone, but it wasn't until expedition parties, which included landscape artist Thomas Moran, made visual records that Congress was convinced to protect the land.

"When they brought those pieces of art back, no one in Washington, D.C., could believe there could be a place like that with the mud pots, boiling pools and all the geysers and wildlife," Lisco said. "They showed that this wonderful place really did exist and it really needed to be protected. That was the first kind of a protection from westward expansion, so that (the land was) not lost, and Congress said, 'This is going to be for the people.'"

After more national parks were created, Congress passed the Organic Act in 1916 to create the NPS, an agency of the U.S. Department of the Interior, to protect those federal areas known as national parks, monuments and reservations.

SRU prepares many students who eventually go to work for the NPS, including Ray Drutis, a 2013 graduate with a degree in park and resource management who is now a back-country ranger in Yellowstone Park.

While Yellowstone is a coveted destination for any PRM major, Lisco said it's difficult to organize a trip because the snow doesn't melt in Yellowstone until after May and many students are committed to internships and practicum experiences for most of the summer months. However, they fit in the 10-day trip to Yellowstone in August 2018 with students covering their own airfare and the University providing supplies and arranging visits with various guides.

"It's like a family-type camping trip with an educational, service and professional components," Lisco said. "Every trip we do is themed differently and we try to make it as inexpensive for the students as we can."

During the last outing, the group traveled in two vans while a third carried their supplies, including backpacking stoves and food. They met with experts ranging from wild land firefighters, to criminal investigators, to specialists for water treatment and bear management. Their service project involved clearing a pasture so that a horse corral could grow more grass.

For leisure, one group went zip lining, where they met with two SRU alumni Deanna Baginski and Caroline McMahon, both 2018 graduates with degrees in park and resource management, who were working for an outfitter in Gardiner, Montana. Another group went on a chartered fishing boat on Yellowstone Lake where they caught, cooked and ate lake trout.